What the Hell Happened to...Steve Downing?

This week in What the Hell Happened To, we remember the career of Steve Downing.  Steve played along side George McGinnis at Washington high School in Indianapolis and had an undefeated season, wining the State championship in 1969.  Both went on to IU the next year and could not play because Freshmen were not allowed to play back then.  Steve was always in George's shadow but was an excellent player in his own right and would prove that.

Coach Bob Knight would be the IU coach their sophomore year, and few who saw Big Steve's monstrous 47 point, 25 rebound game against #7 Kentucky (in Adolph Rupp's last year) would forget it (IU won by a point too). And when McGinnis would leave school after his sophomore year to go pro, Steve stuck around and would continue to make a name for himself.  Steve had an illustrious career at Indiana University where he lead Bob Knight's Hoosiers to the Final Four in 1973.  He was named that season's Big Ten MVP with averages of 20 points and 10 rebounds.  And after all those years later, Steve still ranks #5 All-Time in Rebounds at IU. 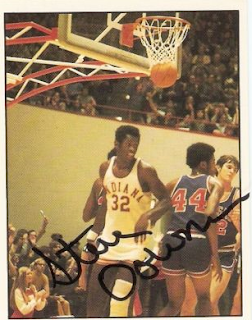 The Celts would select Downing with the 17th overall pick in the 1973 draft. Red Auerbach was optimistic and even lit up his victory cigar when Downing was signed:


We're very happy to have Steve with us.  We feel he can have a great future in the NBA.

I kill the Buffoon for these types of quotes all the time and considering Steve definitely didn't pan out, I can't give Red a pass on this one.

Downing would appear in 24 games his first year with Boston (and one playoff game) en route to the 1974 Championship.  The following season he'd only appear in 3 games and that was the end of his career.   Turns out the Celtics waived Steve because he was too small to play center and considered too "placid" as former Boston Globe writer Ray Fitzgerald put it.  At a mere 6'8 & 225, Steve played center in the NBA.  Today he'd have no problem playing that position but back then I'd imagine it was a bit tougher.  Of course maybe he had a long wingspan, but we wouldn't know that since Jay Bilas wasn't doing the draft back in 1973. 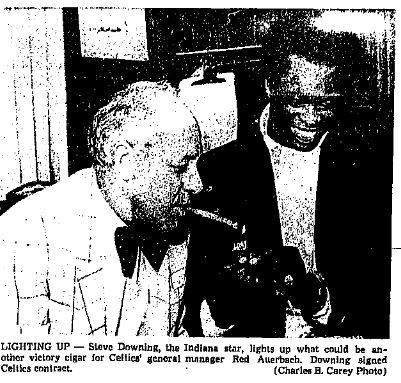 But there's more to the story according to the esteemed Bob Ryan:

The question is how a player could display the collegiate ability that Downing did and yet turn out to be such an utter misfit when he started performing for a paycheck.  What could possibly transform a kid who could score 47 points and grab 25 rebounds against Kentucky and who could come within a dubious blocking call of fouling out Walton and thus bringing a national championship to Indiana into a Casper Milquetoast who wouldn't battle his mother for a loose ball?

Some have defined his problem as a simple nervousness, but is it actually possible that he was tense from the first day of rookie camp, when he started playing in the bumbling fashion we came to accept?  Though billed as a ferocious man on the boards, he never once as a Celtic looked like a professional rebounder.

The only things he did master were three negative feats: he traveled with regularity, lost innumerable shots on the way up and stepped on the endline more times than any 10 players in history.  And whenever something went wrong, his response would always be to flash that peculiar sheepish grin of his and trot downcourt shaking his head.

But he did everything that was asked of him so no, the problem wasn't his attitude, but more, specifically, his personality.  That aggravating grin was probably the key.  He really didn't know how to approach the pro game.  He wasn't mentally tough enough.  He has the ability to play back-up center in the league but someone will have to find the button to push which will make him that 47 point and 25 rebound monster again, the way Bobby Knight did at Indiana.

The essentially sad part of this whole story is that Downing didn't understand what was going on.  He had played his heart out for Bobby Knight at Indiana, with rather dynamic results, but now it wasn't college any more and his every move on the court wasn't diagrammed or programmed the way it was for two years.  The pieces suddenly just didn't fit and he really had nobody to turn to for advice.

It was excruciating to watch this amiable kid run on his treadmill at practice and then travel around in his eerie state of of aimlessness on the road, understanding that he had no role on the club, but at the same time betraying absolutely no comprehension as to why it was so.

"He just takes everything like a lamb" explained one teammate.  Indeed he would never hit anybody or get mad at anybody or do anything at all to indicate that he felt he had something worth fighting for.

Through it all he said little.  Even last year he was the butt of good-natured jokes by teammates, but lately he was simply ignored, not unlike a just-discovered  leper.  His natural reticence turned to complete silence.


Wow Bob, tell us what you really thought of Steve! 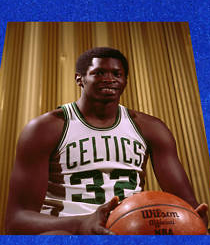 Steve was before my time, and I didn't get to see him play, so it's tough guessing at exactly what the reason was other than how Ryan describes it.  Let's face it: Indiana has a tendency (like Duke) to produce guys that never amount to star-level players at the NBA level.  In fact in the last 35 years, if you throw out Isiah Thomas, the list of Hoosiers who played in the NBA is lengthy, but not particularly impressive.  Kent Benson, Steve Alford, Scott May, Randy Wittman, Mike Woodson, Quinn Buckner, Eric Anderson, Calbert Cheaney, Brian Evans, Alan Henderson, Uwe Blab, Dean Garrett, Keith Smart, and Jarred Jeffries come to mind.  I'm definitely missing some people but you get my drift.  The only one outside of Isiah who averaged more than 10.5 ppg for their career was Woodson and several of them (Benson & Cheaney) were very high draft picks.   Unfortunately Steve can probably be added to this list.

For the last 10 years Steve was the Associate Director of Athletics at Texas Tech, where he worked closely with Bob Knight.  But as of August 2011, Steve was named the Athletic Director for Marian University in Indiana.  Steve's wife, Doris, is a graduate of Marian University and retired principal of Indian Creek Elementary School, also in Indiana.