When rookie Greg Stiemsma made his 6 block debut for the Celtics in a losing effort against the New Orleans Hornets, fans and teammates alike relished in the first signs of life from an underperforming Celtics’ squad.  The Celtics went on to win their next four games, and during Stiemsma’s first five games playing for Boston, the team went 4-1 while Stiemsma averaged 16 minutes, 2.6 blocks, and 4.4 rebounds per game.  Admittedly, these wins came against struggling teams such as the Pistons and Wizards.  However, this does not change the fact that Doc has essentially erased Stiemsma’s minutes and therefore stalled his development ever since their most recent win against the Nets.


In their past five losses, which mark the longest losing streak since the unification of the Big Three, Stiemsma has only averaged 4 measly minutes per game.  The young defensive minded center has already gone from a fan favorite, who had performed well enough to be ranked 9th among the NBA's top rookies, back to being just an afterthought.  “Oh, the Celts lost again?  I wonder… did Greg Stiemsma play at all?”
However, perhaps the most disturbing stat that I came across when looking at Stiemsma’s numbers was the 0 field goals that he has attempted since January 2, when he put up 13 points on 5-7 shooting in his first career start. 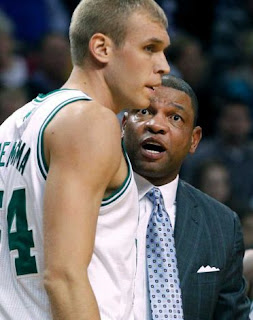 Doc Rivers is a fantastic coach, and it is important to embrace all of his coaching decisions with an open mind since no one else has a better understanding of the Celtics’ players, the establishment of their individual roles, and knowing when the young guys are ready to contribute.  With that being said, Doc needs to welcome the ‘Steamroller’ back into his game plan, so that the former D-League standout can continue to develop into a functional backup center, even on offense, while providing energy and defense to a team that is struggling in both those departments.
With the Celtics plummeting in the power rankings, and age allegedly at the root of their problems, Stiemsma’s play and improvement had been one of the lone bright spots of the young season along with Allen’s deadly shooting percentage, and Rajon Rondo and Brandon Bass’s high level of energy.   Ultimately, Stiemsma needs to be allowed back onto the court.  His leash needs to be cut, and the Great White Beast must be released unto unsuspecting opposing squads.  His shot blocking ability is already phenomenal, but with increased minutes, his defensive footwork and IQ will improve as well, along with his offensive awareness and scoring ability.  His jumper is actually much better than we had previously expected, at least when he shoots with confidence, and a backup front court of Bass and Stiemsma could be more effective than any other Celtic duo.
Garnett simply looks old, and Jermaine O’Neal only really shows up to about half the games.  Bass is trying his best, while Wilcox can’t seem to stay healthy.  First round pick JaJuan Johnson is clearly not ready for NBA minutes, but I believe that Stiemsma has proven that he is ready.  The Celtics paint presence has not been the same since the Perkins trade, and while Stiemsma obviously still has a lot to learn, giving him 15-20 minutes per game off the bench is a big step in the right direction, since game time experience would be the only realistic way that he will continue to learn and improve.  I say let Stiemsma play.