What the Hell Happened to...John Ezersky? 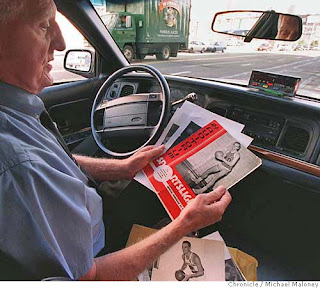 John was born in 1921 and after playing at the University of Rhode Island was drafted by the Celtics in the Basketball Association of America (BAA) draft in 1947.  A couple things to note here: Ezersky was 26 which was older for a rookie and what the hell was the BAA?  The BAA was the precursor to the NBA and in 1949 merged with the NBL to form the NBA [Tangent time: look at the original list of rules by Dr. James Naismith.  Do you think he rolls over in his grave when LeBron does #3?  What about Anthony Mason and John Starks with #5?  Why was he so adamant about the ball not being "hit by a fist?"  I like how play should've consisted of two 15 minute halves with a 5 minute rest in between.  I bet James never envisioned idiotic halftime shows with Stuart Scott and Jon Barry talking about their "expert" predictions and providing their "expert" insight into games dragging the halftime out further than it has to be.  Or expansion into 30 cities.  Thanks David Stern].

John wound up playing for the Celtics in the BAA in 1949 and for the Celtics in the NBA in 1950.  He wore #'s 10 and 16, both of which have long since been retired.  In 1949 he averaged 10.3 ppg for the Celts, the highest ppg of his career.  It's amazing if you look back at the stats of players from those decades just how poor the field goal shooting percentages were.  Between 28-38% were pretty consistent.  It'd be like watching a five on five game today with Nate Robinson taking all the shots ;-)

1950 would be John's last season playing in the NBA.  He also had played for the Baltimore Bullets in the NBA and the Providence Steamrollers of the BAA.

The coach of the Celtics during Ezersky's stay was the intimidating Alvin "Doggie" Julian.  Julian would say to his players "You always have to play hard.  You have to love the game.  If you don't, you'll find yourself out driving a cab somewhere."  When former Celtic John Bach (and former Bulls' assistant coach) was stopped in NYC by a cab honking its horn, it was John Ezersky who lowered the window and said "Tell that SOB Julian that his prediction came true."

John wound up driving a taxi-cab in both NY and San Francisco- for at least 48 years after playing.  At the age of 76 he was still driving a cab in San Francisco and working 12 hour shifts.  In the utmost-Otis Birdsong like style, he was extremely upset about the lack of benefits extended to NBA players who played a minimum of 3 seasons.  His testament, includes this:

I was born and raised in the lower end of Manhattan. I truly believe that God put me on this earth to play basketball. My soul centered on nothing but the game. It is still a life sustaining memory. Now - at 76 years of age - still driving a taxi in San Francisco in the 48th year. Those memories of the game I love has been tainted. Tainted by decree of probably the most powerful sports head in the world - that would be David Stern - Commissioner of the mega-billion dollar professional basketball business - the National Basketball Association.

Obviously some people will love the anti-David Stern comment.  But people will love to hear that Ezersky wound up getting that pension in 2007.  That year, Stern finally extended it to NBA players with 3 years of experience.

"Believe me when I tell you I was so grateful," he said, adding that the league could have given more. "This thing is just in time. It leaves me with money for her (Elaine, his wife) in a savings account. So when I pass away, she can go back East with something, plus the Social Security. ... Now I can relax. I'm no longer going into debt. I'll have nothing left over. But at least I'll have enough for a nice cremation, plus I can get her back with something."

Too bad someone like John had to wait so long to receive what was rightfully his.  When you see jackasses like Bean scowling on every play and berating the refs or DeMarcus Cousins trying to punch his own teammate after a game or Ron Artest's classy performance in Detroit a few years back, stop for a second and think of John Ezersky, and what he had to endure for something that was rightfully his.  He set the table for those to follow him.