They will Bleed Green too, If you Let Them Show

"Change is the constant, the signal for rebirth, the egg of the phoenix"
Christina Baldwin 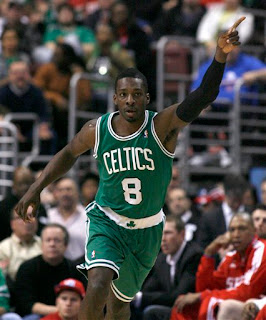 Arriving to a new place, adapting to a new environment, to the climate and to the character of people is always tough. To anyone who has experienced a drastic change of scenery in his life, this is no news. The individual is removed from parts of his life with which he feels related to. In a sense, it feels as if part of your identity is lost in the process. Living in a new place, and in a new culture is always a learning process from the start.

Although pro athletes are used to experiencing such changes in their lifestyles and although they are enough paid to adjust themselves much better to changes than anyone else who may be reading this, you have to understand that we are simply talking about people learning to be accepted by others. Such is the case of all the players that joined the team in the last month.

In the case of Nenad Krstic and Jeff Green the situation is particularly dramatic since their arrival to Beantown coincided with the departure of one of our most popular Celtics in the last decade. The team was in tears, and certainly torn in pieces after the trade deadline trade with Oklahoma City. Literally too, because we had very few bodies available to practice or simply to play. Still shocked, eyes blurred by the recent tears and hearts shaken both by sadness and anger, the Celtics players got the vision of Green and Krstic in the locker room for the first time. It must have been tough for everybody, and while for the most part we've been arguing and debating about the effect on the players that already were here (see Rondo and the Big Three), I would like you to think about the other side of the drama.


I would like you to think about what Green and Krstic were feeling back then. Their lives changed drastically, their schemes, plans and routines completely shattered. They left a fresh and young team in Oklahoma, to join a hierarchy of old veterans with the weight of experience on their shoulders.

If anybody has experienced the loss of a colleague at work, being fired without much explanations after a long period of time in the job, you can relate to this. You are trying to find a way to understand why the company has got rid of such a fine and valid worker and minutes later you meet the guy that will sit at his desk. You shake his hand and you are thinking of your old colleague. He feels your welcoming gestures but it's evident there is something showing in your eyes. He can feel you are thinking about something else. You are not there, and he is still not here. 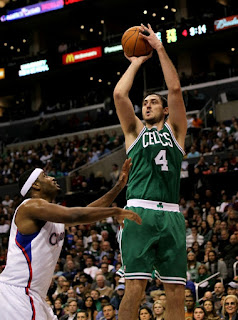 Jeff Green and Nenad Krstic are very good basketball players and it also seems they are also quite good people too. Green has a quite humble profile, in which simplicity and honesty are main elements. Krstic is, as Doc pointed out this week "a pleaser", willing to work for the benefit of the team. Good workers, fine talking individuals, excellent people. They deserve a chance to be accepted by fans.

And obviously they have the talent to play in a championship caliber squad. While Krstic has some flaws (like anybody else in the team) he has the skills, the size and the IQ to be a very good element for this team, now and in the future. Let's not forget he is just 27. He can provide quality minutes for us and he will not complain if his minutes fluctuate. He will work to improve, to show he can be a Celtic for many years.

Jeff Green will make the sport lives of Pierce and Allen longer and smoother. He is a player in the mold of Rondo and KG: long, versatile, skilled and talented. He actually looks like a bigger Rondo. Physically he is gifted to play the sport of basketball. Mentally he is a good candidate to be a Boston Celtics fan favorite. Low profile, show you with my actions person.

While I am sure we will never forget what Kendrick Perkins did for this team and its fans, I am equally convinced that Jeff Green and Nenad Kristic will be welcomed and admired for many years by all of us fans of the Celtics.

They deserve a chance, they will prove they can bleed green too