What the Hell Happened to...Xavier McDaniel?


He still may be the Celtics most impressive free agent acquisition of all time.  In this week's episode of WTHHT, we remember the first player in Div 1 to lead the nation in both scoring and rebounding, forward Xavier McDaniel.

Xavier was picked 4th overall in the 1985 draft by the Seattle Supersonics out of Wichita State.  The X-Man was the real deal on the Sonics, putting up big numbers.  Both quick enough to play the small forward and strong enough to play power forward for some minutes, he formed a spectacular trio in Seattle with fellow-All Stars Tom Chambers and Dale Ellis. 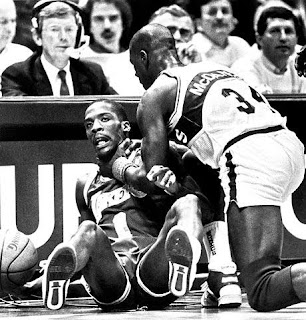 After flourishing in Seattle he'd move on to Phoenix for a cup of coffee before being traded to the Knicks.  After one season in NY, and the 7 game playoff series with the Bulls where I vividly remember MJ saying "Fuck you X, fuck you" while in each others' face, he'd spurn the Knicks and sign with the Celtics in September of 1992.  It was bad timing for McDaniel since Larry had just retired.  I remember McDaniel distinctly mentioning during his press conference that he wasn't there to replace Larry.

I had a love-hate relationship with Xavier McDaniel growing up.  Being a huge Celtics fan, he was my favorite non-Celtic player. I had a bad-ass poster of him hanging on my wall titled "The X-Man Cometh" where he was holding a basketball in one hand and a giant doberman dog with a leash in the other hand.  There had been rumors for awhile of the Celtics trying to obtain him while in Seattle.  When the Knicks acquired him, I threw the poster in it's frame down the stairs (since you all know my abhorrence for NY).  He'd only be with the Knicks for 1 year before heading to the Celtics.  But by that point his best days were behind him.  The high-flying, above the rim, offensive-rebounding monster that was a Seattle Supersonic was long in the past.  But boy was that great stuff.  Check out this video, most of which he's tormenting the hated Flakers:

I used to practice his famous move growing up.  That one or two dribble back in from the mid-post with a half-spin fake towards the baseline and then the ensuing fadeaway jumper: splash.  I'd say that move and my Dennis Scott pump fake dribble-behind the back for a 3 pointer were the two moves I emulated best (although the Kenny Anderson jumper off the dribble, lefty-and-all, was a close third :) 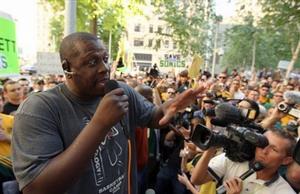 Today, Xavier lives in South Carolina where he runs a Construction / Janitorial Services company (sounds like a versatile company; probably similar to playing the 3 AND the 4).  Listen to his interview here from the 2 Live Stews Show (which can't they make it the 3 Live Stews Show and just add this guy to the show, so he has something to do?!).  If you listen to the interview, McDaniel, unlike Otis Birdsong, totally praises today's players.  He says today's players do everything well and are more athletic.  He said back in the 80s, guys did one thing great and then a lot of things poorly.  It's a really insightful interview and while yours truly is convinced today's players are far superior, it's nice getting a different perspective.  Xman's company is called "34 X Man LLC" even though he primarily wore #31 with the Celtics thanks to Kevin Gamble.  Although McDaniel's last year with the Celts, 94-95, Gamble was gone and he got to wear his #34, allowing this guy to take his #31).