Paxson shoves Del Negro & challenges him to a fight 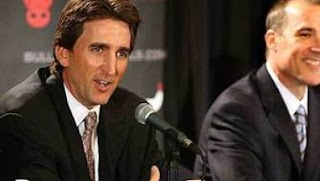 
"After a loss to the Phoenix Suns on March 30, an irate Paxson walked into the coach’s office at the United Center and confronted Del Negro over a narrow breach of a management-imposed minutes limit on injured forward Joakim Noah," writes Adrian Wojnarowski. "Sources said Paxson first grabbed a hold of Del Negro’s tie and seemingly tried to provoke him with two successive jabs into his chest. Paxson was even heard to angrily challenge Del Negro to a fight." Del Negro did not retaliate for fear of having his contract voided or career damaged.

I thought the consensus was that Del Negro's coaching decisions these past two years had already damaged his career? Pretty crazy that Paxson got so heated. I've never heard that he had a hot temper. Then again if he gave Del Negro orders on how many minutes to give Noah coming off his bout with plantar fasciitis and Del Negro didn't follow them I can see why Paxson was furious. Instead of resorting to shoving a simple whisper in Del Negro's ear of "I'm gonna fire your ass the second our season is over" probably would have sufficed.