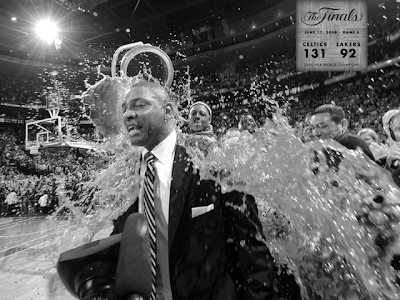 
It is quite possible Doc Rivers is nearing the end of his run as coach of the Celtics [team stats]. Sources have told the Herald that he is leaning toward leaving the bench after this season, but Rivers insisted yesterday no final decision has been made.

There has been similar speculation in the past, but this time the planets seem better aligned for a move. One of Rivers’ sons, Jeremiah, will be a senior next season on the Indiana University hoop team and daughter Callie, a volleyball star, will be in her final year at the University of Florida. Another son, Austin, is a top basketball prospect who will be finishing high school.

There also is the fact the Celtics appear headed for some major offseason issues. While the club still is hoping for a strong playoff run, there will have to be some measure of reconstruction this summer.

“Part of it is true,” Rivers said of the speculation. “Every year I sit down in the middle of the summer and I have a family discussion. We talk about what we want to do. That’s nothing new, but every year it gets stronger and stronger. And I think people are making some common sense reads. I’ve got three seniors next year, two in college and one in high school. That’s important to me. We’re all family men. We all have kids.

“Every year you’ve got to weigh what’s best for your kids. That’s just the way it is. But, I don’t get into it now. I don’t talk about it. I’ve never told anyone one way or the other, and that’s how it’s always been.”

Rivers even avoided the subject when general manager Danny Ainge wanted to negotiate a contract extension. The coach has one year left on his deal, but he has thus far passed on the chance for a new pact.

“Danny already brought it up, and I told him I didn’t want to talk about it,” Rivers said.

Well this comes out of left field. At least for me. I know Doc has some detractors, but if you're looking for a better alternative, the grass isn't always greener as they say. Would be awesome if the team used this as motivation to win another title this Spring. We shall see where this story goes.