The Boston Celtics fell back to .500 tonight after losing to the San Antonio Spurs, a team that had only won four games prior on the season. Dejounte Murray was the best player on the court tonight. He finished with 29 points, 11 rebounds, 6 assists, and 3 steals.

The Celtics have a rather long history of losing in San Antonio, but it was one thing when the Spurs had Tim Duncan and Kawhi Leonard. Or even LaMarcus Aldridge and DeMar DeRozan. Losing tonight after the Nets loss on Wednesday takes a lot of wind out of the Celtics' sail.

The hype machine was in full effect after the Celtics win over the league worst Rockets on Monday. They had just won three in a row and seem to have righted the ship, but through 20 games one must ask, how are this year's Celtics different than last year's .500 bunch that everyone blasted as underachievers and demanded their coach be fired?

Ime Udoka said “nobody could stop Dejounte Murray” while things “kind of snowballed offensively” for Boston.

Seems like a couple roster changes, but still the same team more or less. Oh yeah, and you never being able to count on Robert Williams to be in the line-up on any given night.

The Celtics rallied back to actually lead by 7 in the 4th quarter, but couldn't buy a basket for the final 5 minutes of the game. Also a reoccuring story from last year where the team would fall behind by way too much to an iferior team, mount a great comeback, but then run out of gas on said comeback.

Jayson Tatum led the Celtics tonight with 24 points in the loss. Marcus Smart filled up the box score again with 13 points, 7 rebounds, and 8 assists. He was no Murray (Who Boston had a chance to draft at multiple points of the 2016 draft), but I am a fan of high assist Smart.

Somehow Enes Kanter ended up with a +28 and Al Horford with a -29. I write that just because it's wild to me that they could have a 57 point difference. Not Al's best night for sure. The Celtics will look to get back on the winning track Sunday in Toronto.

"We're gonna figure it out," Jayson Tatum confidently says. "I'm certain of it." 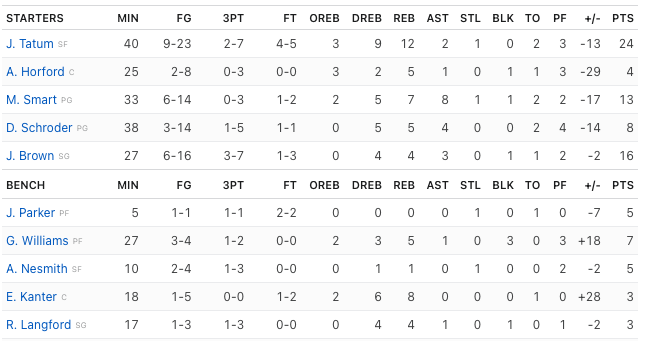