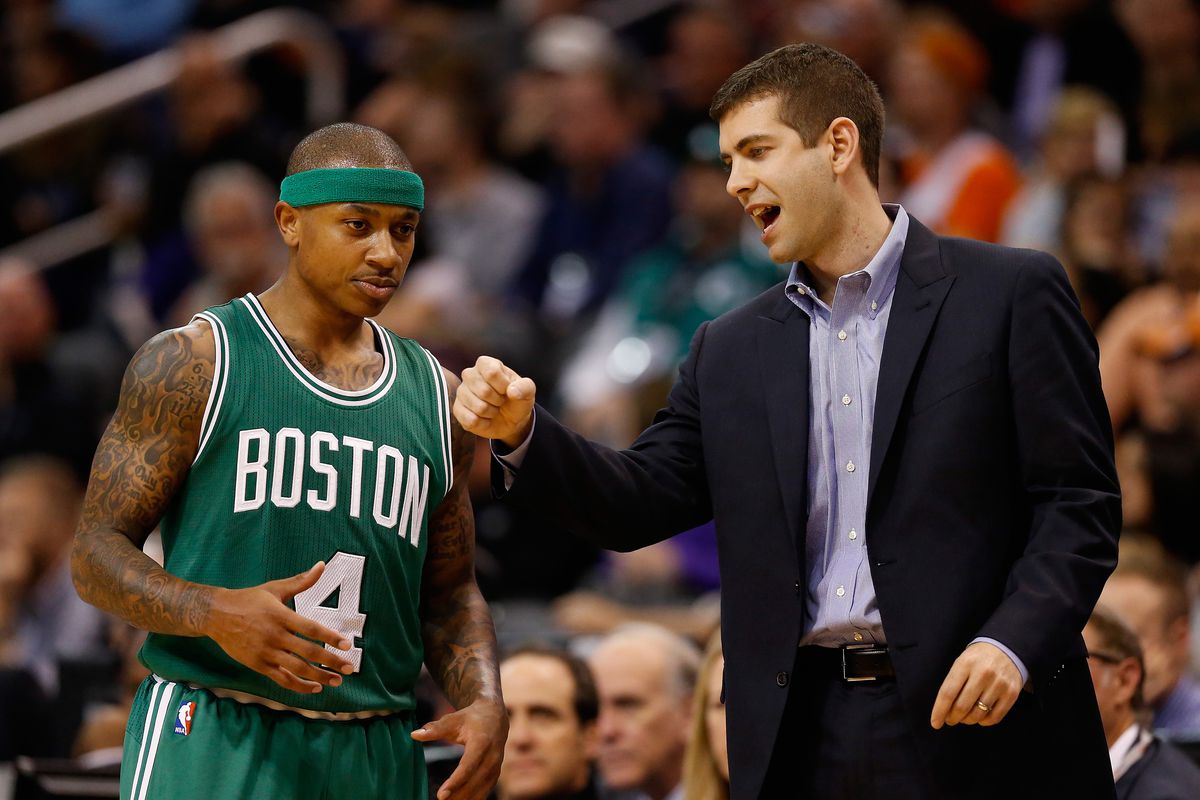 Well here's the rumor Celtics fans have been clamoring for a few years now. Brad Stevens is interested in an Isaiah Thomas reunion in Boston.

"Boston, I’m told, has interest in an Isaiah Thomas reunion, with new Celtics president of basketball operations Brad Stevens known to be one of Thomas’ biggest fans," Stein wrote Monday on Substack.

There are so many angles to take from this report. The fan in me wants to believe after all the "Boy Who Cried Wolf" updates from Isaiah that he's completely healthy and back to the same player he was in Boston, that this time he's actually right.

The cynic in me was thinking yesterday that the best PR move the Celtics could make after all the hate they will get from a large portion of Celtics fans following what seems to be an inevitable Marcus Smart trade, would be to turn around and immediately announce they've signed Isaiah Thomas. In mean fans went from loving the Josh Richardson trade and calling Stevens a genius to being pissed that Moses Brown was traded away. If Moses Brown's departure can bring about that reaction, imagine how all the Smart stans will react when he's traded? Look out. August 1, 2021

But re-signing Thomas will in essence cancel out the negative reaction. If you wear green tinted shades 24/7 and are a "green teamer," despite your protests that you'd stop being a fan if (insert name here, Rondo, Pierce, KG, Thomas, Smart) was traded, you always come around. The same fans that were pissed at the Kendrick Perkins trade eventually talked about how great Jeff Green was. When he'd disappear they had his back. They were all aboard the Uncle Jeff bandwagon.

Celtics must read their mentions on Twitter as they are reportedly interested in bring back some former C's https://t.co/w2RtVvXamp pic.twitter.com/3bBAFlLv6Y

So if Stevens trades let's say Smart for an expiring contract, and a top 10 protected 1st rounder, AND then signs Isaiah Thomas, many or maybe most of the Smart stans will come around and say things like, "Wish Boston could have kept Smart, but Isaiah and (insert name of expiring player contract that was included but fans will think Boston really wanted him. See Mo Wagner, Luke Kornet, and Moses Brown) gives you two good players and we now have a pick to trade for Beal."

Here's what I wrote yesterday about Thomas:

Of course the name from the past most fans want to hear is Isaiah Thomas'. There have been zero rumors of any NBA team showing interest in the former MVP finalist. I mean you're getting all the same tweets and retweets from Thomas about how he's "back to his old self," but it's kind of a Boy Who Cried Wolf situation by now. We've gotten that same story every year now. NBA scouts said he no longer had the burst on drives he once did when they were asked to evaluate is inefficient Team USA performance last winter. And IT's Pelicans' tenure this season was extremely brief.

Everyone already knows if you throw Isaiah out on a court and he has the green light he's going to hit a lot of 3's. He only will be back once scouts are seeing him do all the other stuff effectively in NBA games. Drives and dishes. Cutting down on turnovers. Points at the basket. Great shooting percentage. Being a plus in +/- while on the court.

So if this Stein report from today is true and you're not a cynic that thinks Boston would just sign Thomas for PR cover for the fall out from a Smart trade, this means that the Celtics watched one of the recent Isaiah Thomas Drew League or Atlanta performances and saw something more from Isaiah than he showed with Team USA this past winter or the Pelicans briefly this spring.

There's also the possibility that Stevens would have brought Isaiah back one of these past two seasons, but Danny Ainge didn't agree to it. But I'm hopeful that the Celtics saw an improved burst out of IT. That he was impressing on his drives. Again everyone knows Thomas will hit 3's, it's the rest of his game that needs to back. And due to the fact that IT's game was all scoring and no defense, if he's just 75% back that still doesn't make him an NBA caliber player. He needs to be at least 90% back to be a player that will put up a positive +/-.

Forget any box score where you see Thomas score 10 points in an NBA game in limited minutes. It's about the other things. The assists, the assists to turnover ratio, did the other team outscore Isaiah's while he was on the floor.

Here’s a look at @isaiahthomas’ 37-point performance in his Drew League debut this past weekend. #TheDrew

Thomas said he's humble enough to accept any role. Personally I'd love to see him added to this week's Celtics summer league team and just dominate there. Drives to the hoop, scoring at will, Celtics winning every game. It definitely would be humbling, but this is typically what former NBA players do when trying to get another chance. And IT has been asking everyone for that chance. He says if he's just given the chance, he will show the world. How fun would it be to see him with the Celtics this week?

And if that goes well, you can expect to see Thomas make the opening night roster. Right now we are going to have to see more traction to this rumor, before we can say there's a decent chance Thomas returns.

The Celtics always saw @isaiahthomas as best fit for a 6th man role, but he wanted more -- and he played so well they had to start him.

Now he'd be ready to provide instant offense and energy off the bench. The timing (and price) may be right for C's and IT to renew their vows.