Report: Stevens' frustration with Marcus Smart could lead to a trade this offseason 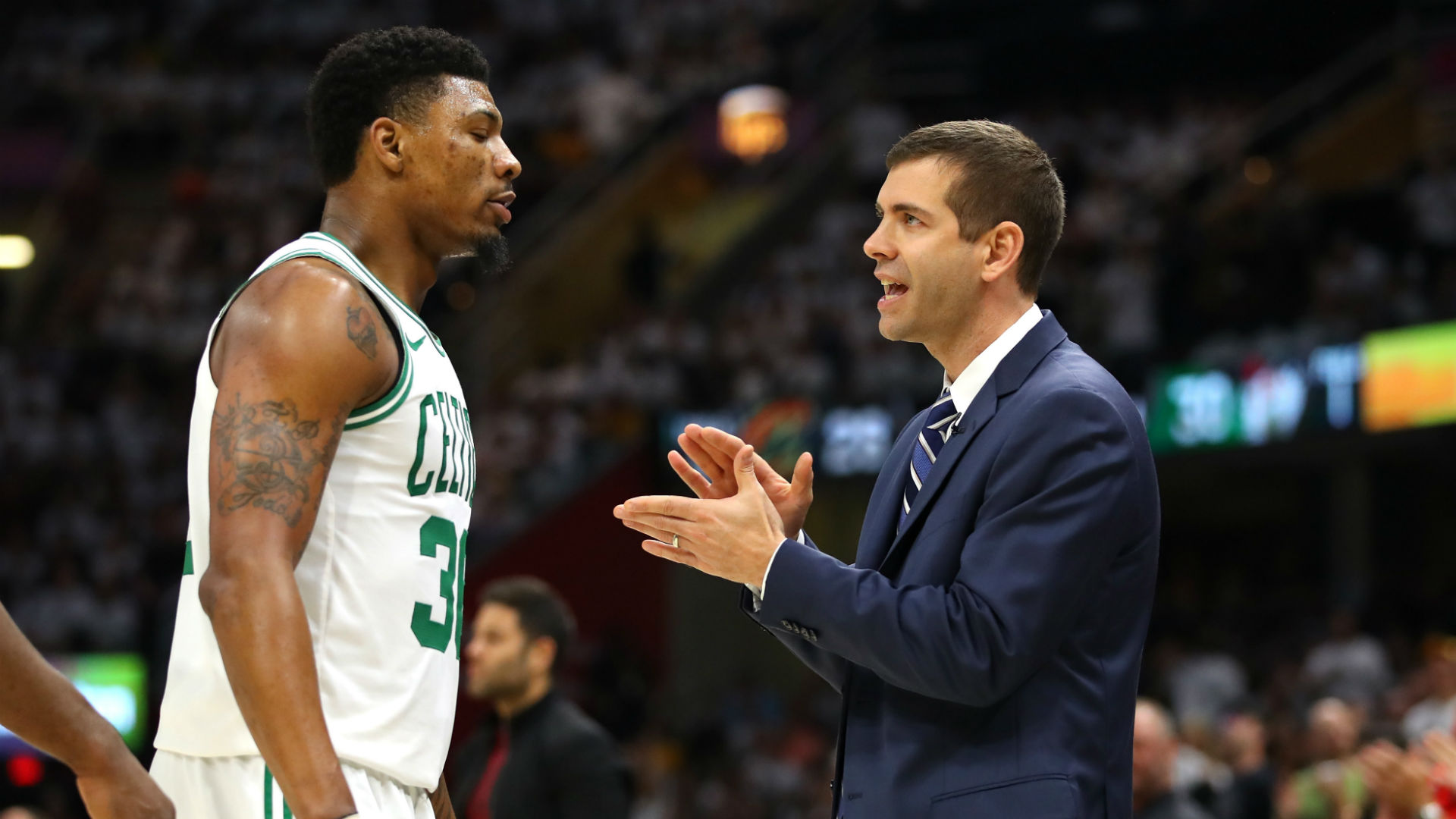 According to Chris Mannix at Sports Illustrated, Brad Stevens frustration over Marcus Smart's "unpredictable play" makes the chances Boston trades him this summer higher than they re-sign him.

Boston’s acquisition of Josh Richardson could spell the end of Marcus Smart’s run in Boston. Smart has become a fan favorite over seven years in Boston, but Brad Stevens has been frustrated by Smart’s unpredictable play in recent years, per sources. Smart, one of the NBA’s better perimeter defenders, is entering the final year of his contract. Boston could extend Smart, but two people familiar with Stevens thinking tell SI it’s more likely Stevens will look to trade Smart before the start of the season. Boston shopped Smart last season, seeking multiple first round picks, a team executive with knowledge of the discussions told SI. Smart’s value now? “Probably a first round pick and a rotational player,” a high ranking Eastern Conference executive told SI. “Might be able to swap him for similar player that fits a positional need. [Danny Ainge] valued him like an All-Star though—he is not.”

I believe this rumor of the Celtics growing frustrated with Smart has been out there before. Sounds like Stevens' asking price in a trade is much less than what Ainge was demanding. I think that's going to be a recurring theme. Not sure Ainge would have given up pick #16 so easily. In regards to Smart, even if Ainge was still around, his asking price would have to be quite lower than it was a year ago.

Last year Smart was a key contributor on a team that almost made the NBA Finals. Now he's a year older, his defense slipped some this past season, he's one year closer to free agency, and Boston's poor showing this past season makes him less appealing in other teams' eyes. This is why as much as I love Smart, I've never tried to pander to fans with a "You can't trade Smart" schtick. He was only going to be re-signed if the team already had a title contender.

If ur a Marcus Smart stan, here's troubling dilemma:

In order for there to be a chance that C's re-sign MS, BOS has to already have a 3rd star. Cap-wise u can't sign Beal & retain MS.

Once all the All-Star free agents walked for nothing and the draft capital expired, the writing has been on the wall. We've never heard one rumor of the Celtics discussing a new contract with Smart. We never heard one rumor about Isaiah Thomas either. And I'm pretty sure we didn't hear one for Rajon Rondo either. Both those guards were also fan favorites. Both were traded.

So if the Celtics are going to trade Smart, wouldn't you at least want them to get a good return? Looks like the time to move Marcus was prior to the 2020 draft. Smart fans are going to be underwhelmed by the return Stevens gets this summer, and even more-so if he waits to the deadline. Could be something like an expiring contract and a protected 1st rounder. Sure the Celtics will aim higher, but I have the feeling that Stevens unlike Ainge doesn't want to play that let assets walk for nothing game.

While the writing is on the wall to prepare for a Smart trade, there's also the chance nothing goes down this summer. But if you're a Smart stan that won't mean you can breath easily. Just means that the offers were awful and that the Celtics will wait to the trade deadline in February hoping something better pops up.

Was thinking that too. That's typically a very Red Sox thing to do, but notice how Kemba Walker went from a great locker room presence "Can't measure what he brings," to all of a sudden a player that needed to be removed from the locker room? A guy who reportedly wouldn't rehab? https://t.co/UQEFi9SbqT

If you want some hope that Smart will remain here long term, meaning Boston will give him the proverbial "bag" in an extension, you're going to need a few things to happen. One of the kids on the Celtics will have to make a big leap to borderline star early next season. If Stevens feels the team already has a third home grown star on the roster and Boston is thriving next season, paying Smart to be your 4th guy is a possibility. Robert Williams is the most likley candidate.

The other option is said player impresses enough early in the season that Stevens can trade him in a deal for a 3rd star. It can't be someone like Beal or Lillard, since they will make too much, and the Celtics aren't the Lakers; Wyc isn't going to pay a ridiculous luxury tax to add a Beal contract AND pay Smart big money.

You'll also need to hear some rumblings of the Celtics talking new contract with Smart. Remember how little Boston got for Rondo? When the writing is on the wall it;s inevitable. The last scenario where Smart could remain a Celtic past next season is if he has a brutal 2021-22 season and his free agent market tanks completely. He then might have to settle for a team friendly deal with the Celtics. Either that or he suffers a very bad injury. But these aren't the type of things you should root for if you're a Smart or Celtics fan.