Marcus Smart agrees to $77 million extension with the Boston Celtics

Marcus Smart just got PAID. So much for the narrative that the Celtics passed on guys in free agency in order to free up max cap space for next summer. By giving Smart this lucrative deal a year ahead of his free agency, the Celtics are committing to the guard for the long term. The trade kicker is even further evidence.

It was believed that Boston would only sign Smart or other players this summer to long term deals if the contracts were easily moveable. But by essentially giving in to Smart's request for a 4 year, $80 million dollar deal Stevens is taking a risk here. If Smart's 2021-22 season resembles his 2020-21 one, the Celtics would be hard pressed to find a taker for Smart with this contract if they needed to clear max space. Stevens is betting on Smart to return to the player he was in 2019-20 or become even better.

Either that or Stevens has given up on the plan to create max cap room and has decided that he wants Smart to be a part of the team's core for the next five seasons. If that's the case, then the Kemba Walker trade was more about just keeping ownership from paying the luxury tax (Don't think they've paid it since Pierce and Garnett were Celtics), than about creating cap space next summer.

Was that move a good one? Will depend partly on how #16 Alperen Sengun (or anyone who was available at that spot fares). Should Boston have kept Evan Fournier if they were going to give Smart $20 million a year anyway and not go the max cap space route? Again, to be determined.

Happy for my dawg! https://t.co/bHRYfnR3PH

If there was no such thing as a salary cap or luxury tax, I'd simply say, "This is awesome! Way to go Marcus! Way to go Celtics!" But if you've followed the NBA for any length of time you know that in order to have the best team you can possibly have, you need to make sure not to overpay players. So the "it's not my money" line doesn't work. Every extra million Marcus gets per year is a million that can't be spent on other players.

The Celtics signed an All-Star point guard two years ago and had to trade a very valuable 1st rounder and take back a bad contract because he ended up being overpaid. If you're Smart's kids you want him to sign for $77.1 million plus a trade kicker. If you're a fan of the Celtics and prioritize winning a championship, you'd have preferred he accepted the $68 million dollar deal. Shoot, you'd prefer it was just $60 million or for only 3 years.

Celtics have agreed to give Marcus Smart the max extension he was eligible for this summer $77.1. Plus a trade kicker. Obv its a great deal for Smart, but what are your thoughts as a Celtics fan?

If Jayson Tatum had made an All-NBA team this past year his new max contract would have bumped up considerably. Again as a fan who wants the best team possible, I wasn't upset he didn't make it. Opened up more money for the team. If you're a fan of Smart's you should be thankful Tatum didn't make it. If he does, I don't see the Celtics giving Smart this much.

So if Tatum making less led to Smart getting his brinks truck, the math also means that Marcus getting paid this much means someone else won't be retained/signed. Now the best case scenario is if Smart breaks out into a star. He's 27 years old, so that would be late in the game, but it's not unheard of. Is it likely? No. But if it happened then the Celtics would look wise for locking Smart up now. 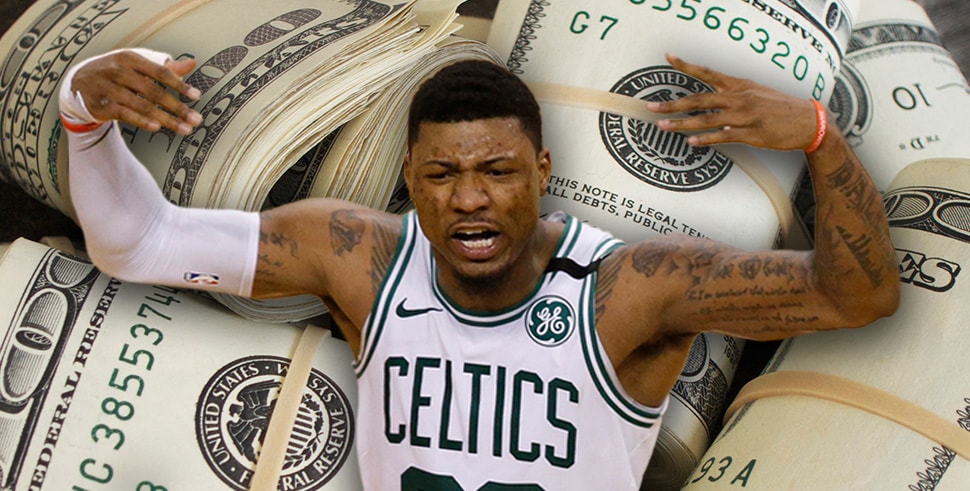 For Marcus this was a no-brainer. A lot can happen in a year by the time he was a free agent. Just ask Dennis Schroder. There is no guarantee another team offers Smart $77 million next summer or a 4 year contract through the age of 32. I thought Smart might have to choose between the safer choice of taking $68 million now or gambling that he could get $80 million next summer. In the end he got to have his cake and eat it too.

Smart will be around for the long haul Celtics fans. If you think he's an All-Star talent then be ecstatic. If you think Smart is a very solid player, but a flawed one and not an All-Star talent, then today won't be as exciting. I'm happy that Smart will remain on the Celtics, but think like with the Kemba trade, Stevens lost out in a negotiations. Smart and his agent won the staring contest. No compromise needed. This was the absolute max extension that Smart was eligible to get this offseason and he got it.

Brad: We can offer $68 million