Gregg Popovich and the Inspiration for NBA Load Management 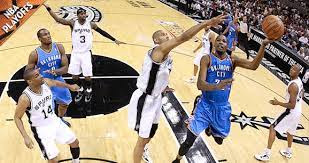 ‘Twas nine years ago, just about at this juncture of the NBA post-season, that the “egg” was laid that would soon hatch into an “image” issue for Stern, Silver and Associates – one that lingers to this day.
Prior to this season’s pandemic-induced scheduling alterations, 2011-12’s condensed (990 total games, rather than the traditional 1,230) slate was the most-recent occasion when the NBA strayed from its standard 82 games spread across roughly six months.
On St. Patrick’s Day of 2012, a dynastic bunch of San Antonio Spurs were defeated in Dallas 106-99 by the reigning and defending champions, a game in which Pop’s generally clutch crew whiffed on eight of 18 tries from the foul line. 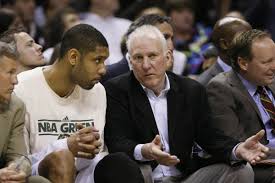 But over the season’s final 40 days, Mr. Duncan and his assorted tasty pastries dry-roasted the rest of the league for 21 wins in 23 tries, closing their season with 10 wins in a row … before opening the playoffs with another 10 consecutive victories.
The day after Memorial Day in the shadow of the Riverwalk, Tony Parker’s unconscious 16-for-21 marksmanship and eight assists pushed the old-school Central Texas “cagers” into a 2-0 advantage in the Western Conference Final.
Alas, the Spurs would not again taste victory until – perhaps fittingly – Halloween night in New Orleans.
Cause & Effect?
Three weeks and just 11 games into that new season, San Antonio embarked on a six-game, nine-day road trip set to conclude on Thanksgiving night with a nationally-televised show-down against freshly-crowned King James and/on his Court. 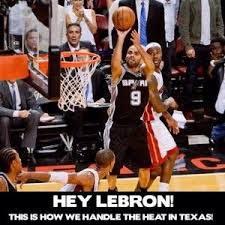 The 2013 NBA Finalists-to-be delivered a closely-contested, competitive tussle, the homeboys prevailing by five points.
But the real “gamesmanship” had gone on the night before, following the Spurs’ victory in Orlando. Field Marshall Popovich unilaterally decided to send four of his players – three starters and the sixth-man – home to Texas a day (and a game) early … only ponied up for “coach” tickets, to boot, earning an admonition from the Players’ Union.
Essentially, Coach was prioritizing that Saturday’s square-off with a division rival (Memphis) over an inter-conference game, however “marquee” the match-up … also sparing four key guys the chore of playing for a fourth time in five days.
Commissioner Stern begged to differ, deeming this instance of personnel management deleterious to the NBA Collective and fining the franchise $250,000.
The issue of teams “resting” healthy players had arisen at an owners’ meeting a couple of years earlier. While the usage of player personnel was left to the discretion of each team, the Commish did retain a sort of “Best for Business” Veto Power.
But during the 2011-12 lockout-shortened season, NBA deputy commissioner Adam Silver seemed to indicate that Popovich's strategy was approved by the league.

"The strategic resting of particular players on particular nights is within the discretion of the teams," Silver told nba.com in April. "And Gregg Popovich in particular is probably the last coach that I would second-guess."

Isn’t it curious that during a period of time when NBA franchises have experienced unprecedented solvency and stability – the league last expanded in 2004, the only subsequent franchise re-location four years later – the standards and practices of the league’s competitive culture have induced a brand-new style of play and an entirely re-vamped philosophy towards the acquisition and usage of its talent?
Abacus Revelation for the Road
For all its concerns and precautions about minimizing wear-and-tear on players …
… through this season’s first 65 post-season games (thru Mon. and including the Play-in Round), 45 players have combined to deliver a collective 109 40+-minute efforts.