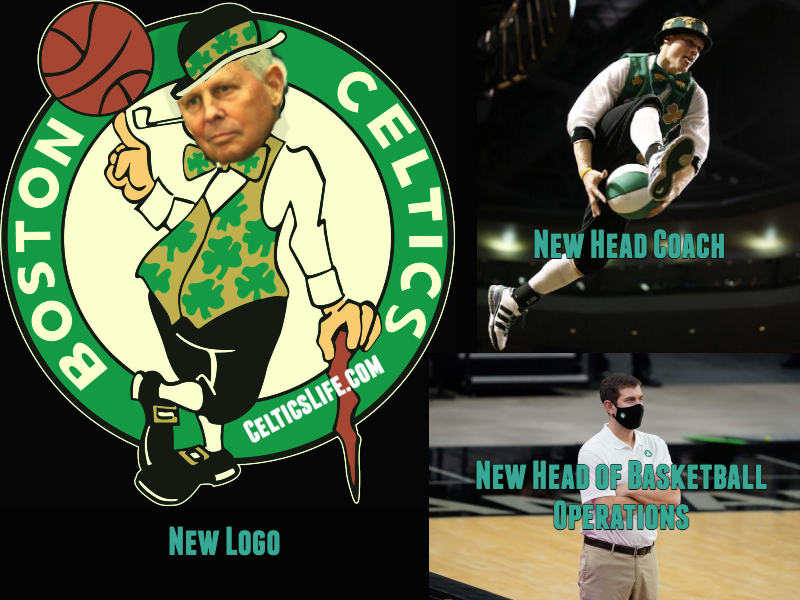 Fans wanted the Boston Celtics to shake things up and the morning after the Celtics were eliminated from the playoffs they did just that, when Danny Ainge announced he was stepping down as head of basketball operations after 18 years. But that's not all! Brad Stevens was stepping up into that role, and in doing do was relinquishing his role as head coach. Somehow the Fire Danny and Fire Brad contingents were both happy.

But the joke is on everyone who wanted both gone. It all makes sense now. Brad Stevens won't coach anymore, but instead he'll now run the franchise. Reportedly he's looking for a coach that will inspire the team more than just an x's and o's man or woman. Well enter Lucky, who has been inspiring crowds for many years at the TD Garden. Pretty sure the current man in the costume has the longest running tenure in that role. Well now we'll have to look up his name because he's the head coach.

And earlier this week Lucky the Logo warned Kyrie that he'd get his comeuppance when he next returned to the TD Garden floor. Danny Ainge up until last week had not said a bad word about Kyrie. Not while he was Celtic, not when he quit on the team vs the Bucks in the playoffs, and not after he went back on his words to fans and walked in free agency. Not one bad word. But last week you saw cracks when Kyrie decided to call Boston fans racist prior to coming to Boston for Games 3 and 4.

Now no longer the voice of the Celtics, Ainge can more freely speak his mind on Kyrie. And as the new logo if Kyrie happens to trip the next time he runs past mid court, we'll make sure to look Ainge's way to see if he's winking.

Shame on all of us for not seeing this yesterday. Congrats Lucky on the new gig as head coach of the greatest team in NBA history. And congrats Danny on your next chapter. We're sure you'll enjoy working less hours and the greater freedom you will have as the the team's new logo. Who else should we keep our eyes on for potential out of the blue falls on the TD Garden court next season?