Did the Celtics miss a golden opportunity to bring Sam Presti home? 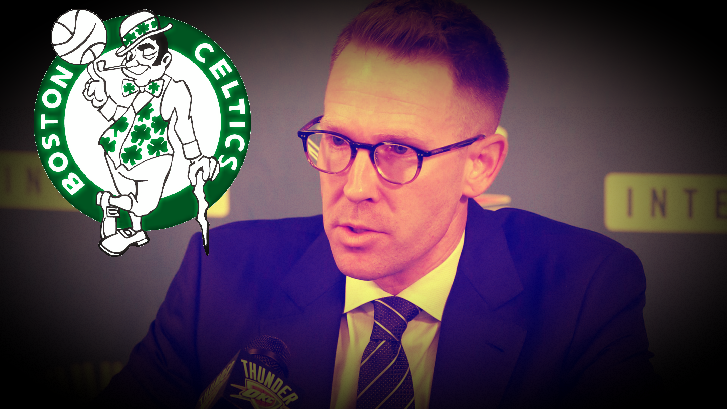 The Ringer was first to mention yesterday that the Boston Celtics ownership thought about pursuing Oklahoma City Thunder head of basketball operations Sam Presti before deciding to stick in house and promote Brad Stevens. Chris Mannix does a very good job in the above video pointing out all the reasons why Presti would have made sense for Boston and he called it "perplexing" that they didn't at least attempt to pursue him.

Presti of course grew up here, went to college here, and is known as one of the best GM's in the league (Easier to say GM, even though they made up all these extra fancy titles so everyone can feel good). Mannix claims he's the best and he may be right. Some will argue that he never won a title, but its' a completely different story when you're the GM of a small market team like the Thunder as opposed to a team like the Lakers.

The Lakers would have been able to afford to keep all four of Durant, Westbrook, Harden, and Ibaka and they would have been able to add top free agents to compliment the roster. Presti has recently turned Westbrook and Paul George into approximately a gazillion 1st rounders. It's not hard to imagine in Boston he'd be a better version of Danny Ainge's strengths without some of the weaknesses.

Now you could look at this a few ways. One, you could say maybe Wyc and ownership know more about Brad Stevens than we all do. Maybe he's pushed to trade, draft, or sign certain guys who went on to become great? Maybe they think he will be even better than Presti?

Or you could accuse ownership of being too comfortable with their known commodities and not going big. You might even accuse them of being cheap if you think they wanted to get rid of Stevens as a coach, but this way they don't have to eat any money. He simply becomes the GM and instead of paying Danny they can pay a new head coach. Personally, I don't think they'd choose to penny pinch this way. I think ownership was content with both Ainge and Stevens in their roles and there was no talk of firing Stevens.

The other reason Mannix thinks going after Presti was a no brainer is because that way you keep your solid coach. And now I know a lot of our readers don't think Brad Stevens is a good coach, but basketball people, front office personnel, fellow and former coaches all believe he's a great coach. Injuries and roster construction are the only things that have held him back. And it's a superstar league. Add a KG to Tatum and Jaylen and they'd have titles. Just like adding Pierce and Ray didn't win any titles until they played with KG (and then LeBron later for Allen).

So did Boston blow a golden opportunity here to go for one of the top GM's in the game? And let's be honest here they weren't going to be able to get Masai Ujiri or RC Buford so for all intents and purposes, Presti was the guy. If there is one team that Presti would leave the Thunder for it would be the team he grew up rooting for and likely dreamt of playing for.

Celtics ownership bet on Brad Stevens. I'm rooting for him to prove they made the right call. But sometimes the safe choice is the gamble. And let's be honest, the C's are making a gamble here.