Paul Pierce appears to be handling his ESPN firing well 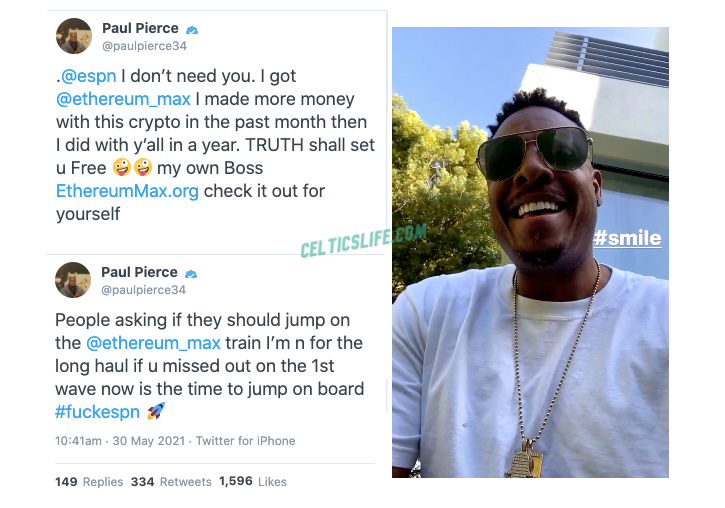 Paul Pierce in a series of tweets over the last few days has been letting ESPN know he doesn't need them. It started with a tweet on Wednesday where Pierce boasted about making more money in a month with cryptocurrency than he did with ESPN in a year. Pierce made sure to include an "at" ESPN in the tweet.

.@espn I don’t need you. I got @ethereum_max I made more money with this crypto in the past month then I did with y’all in a year. TRUTH shall set u Free 🤪🤪 my own Bosshttps://t.co/3irnuWYve3 check it out for yourself

Then today he upped the ante with a "fuckespn" hashtag.

The rocket ships are an ode to the summer of free agency that included DeAndre Jordan's flip flop from the Mavs back to the Clippers. While NBA players were all throwing out emojis to describe the scene, Pierce included a pic of a rocket emoji. So he's just poking fun at himself here.

I do hope The Truth is doing ok. The video that led to Pierce being let go by ESPN was odd and it seems while he's publicly trying to put up a good face and act like he doesn't care, you can tell he's still bitter. But the bigger concern for me is not about him losing his job with ESPN or whether he has success with cryto or not, it's Pierce's mental health.

I mean everyone is enjoying egging on Pierce, but something seems off with him of late. Just don't want to see it become a situation that spirals to a worse place. Better to be over-concerned about someone than to ignore possible cries for help.

Hoping the Celtics have reached out to Pierce during this time just to check on his well being.