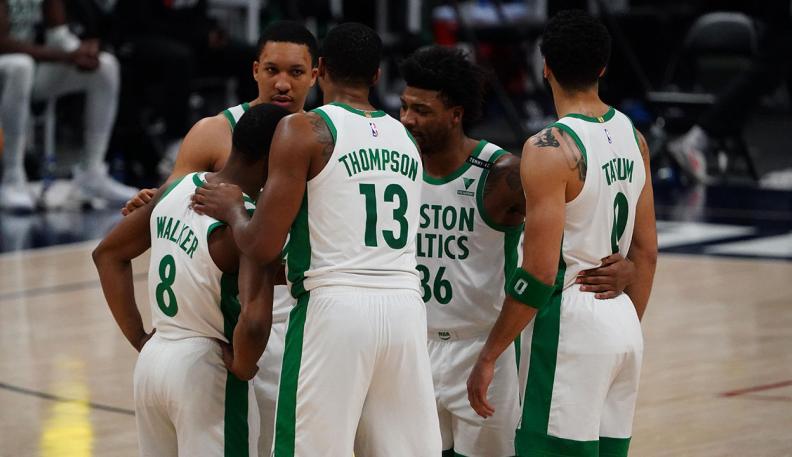 Well it took 55 games, but the Celtics are finally fun to watch. It has been brutal watching them play lifeless and uninspired basketball for the past couple months, but after constant scrutinization and criticism from NBA fans everywhere, the Celtics finally look like the team they were supposed to be. Well, for now they do at least. I know it’s crazy, but maybe they actually just needed a healthy roster for a long period of time to start playing well.

So far, the Celtics are 8-3 since the trade deadline and have been on the uptrend. They are 6-1 in the month of April, with wins against top tier teams in the west like the Trail Blazers and Nuggets, along with wins against Eastern Conference playoff teams like the Knicks and Hornets. The Celts now sit at fifth in the conference with a 29-26 record, a game behind the Hawks who play the Bucks tonight.

If it seems like the Celtics have been a good 2nd half team since the all-star break, they haven't been...they've been the BEST 2nd half team in the NBA since the break.

> I’m not completely sold on the Celtics being better consistently yet, but what we have seen in the past couple of weeks has been promising. It looks like they flipped the switch and became more locked in as a team. The best part about this Celtics turnaround is that they are noticeably playing better in departments that they have been struggling in all year.

The biggest issue with this team, in my opinion, has been their inability to win games in clutch situations. They would stick with teams until the end of games, but then they would inevitably blow it.. Before the trade deadline in late March, the Celtics played the most clutch time games, but ranked in the bottom half in win percentage (26th), points per game (27th), net rating (24th) and true shooting percentage (28th).

Since the deadline they have played way better in clutch situations. They won three of their last three clutch games and rank in the top half in clutch time categories like offensive rating (5th), points per game, (8th), true shooting percentage (8th) and net rating (13th). During this stretch, the Cs have been hitting the important shots, making stops when they need to, and demonstrating their unwillingness to lose late in games. It also helps to have a big time player like Jayson Tatum, who never seems to be afraid of the big moment.

Jayson Tatum gets the ball in this situation he might as well wear a sign around his neck telling you what he’s about to do. and it will stay that way until someone figures out how to stop it. pic.twitter.com/60gBTt4y4v

The Celtics defense is also something that has looked better recently, but has been gross to watch for the majority of the season. It’s strange because Brad Stevens defense’s are typically very solid, but this year the focus just hasn’t been there. The Celtics’ 14th ranked defense is the lowest in the Brad Stevens era. This year’s team particularly struggles in covering the three and giving up second chance points.

Since the deadline, they are the 5th ranked defense (107.1 Drtg) and their effort on that side of the ball is noticeable; the Cs are hustling and fighting more on each defensive possession. During this span, the Celtics have played against worthy offensive opponents, but have done a great job slowing them down. For example, Marcus Smart covered Dame Lillard for 5:41 total and held him to only 3 points on 1/5 shooting in that matchup. Dame still had 28 points, but Smart's efforts slowed him down from potentially blowing things up like we've seen players do to the Celtics all year. Smart’s energy has been a key reason why the Celtics have been focusing more on the defensive end. He heard the slander and decided to take his game up a notch.

Want to know why Brad Stevens says the Celtics "love and trust" Marcus Smart? Here's to examples. Smart starts this clip on the floor at the opposite end of the court. By the end of it, he's teleported back into the play for steal. pic.twitter.com/W7y7zTEbc1

The other thing that has been better is the way the bench has been contributing. This year’s bench unit has been wildly inconsistent, but mostly just bad. Outside of Fournier, the Celtics bench lacks scoring, so they are supposed to make up for it by defending well and bringing energy. Since the deadline, the bench has been able to provide those qualities. Romeo has defended at a high level since his return (101 Drtg). Grant has been playing very well lately, defending at a high clip and hitting timely threes. Pritchard has been consistently bringing energy off the bench all season. Thompson has been all-around solid since his return (read about it in my previous article). And Fournier is still out for a little bit, but adding him back will be beneficial. So it’s not the greatest bench unit, but at least it looks like we know what the rotation is going to look like down the home stretch of the regular season.

Rob held him to 2-6 shooting

What in the world lol

They haven’t been perfect, but I’d say the Celtics have been playing their best basketball of the season as of late. They’re honestly lucky that getting the four seed is still so attainable, despite being three games over .500 this late into the season. It’s a lot more fun to see them play how they have been in April, but the big question is can they keep this up? They have to continue playing with a chip on their shoulder, but they also have to stay healthy. If they stay healthy then I think we can be more optimistic come playoff time.

Today we honor #OneBostonDay, a day to celebrate the resiliency and strength of the city we call home 💛💙 pic.twitter.com/rMtICPUAOc