The Celtics should be looking for revenge tonight against the Jazz 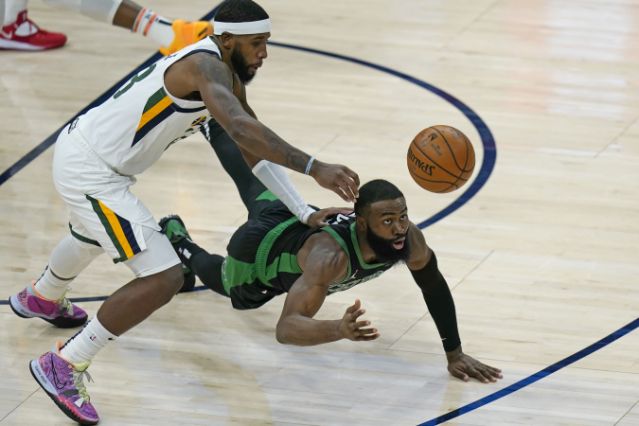 I think it’s a good time to take a small break from the thousands of trade rumors the Celtics seem to be involved in and start focusing on tonight’s game. It’s time for the Cs to get revenge. The Celtics are healthy at the moment and they have had almost a week to start putting things together with a healthy roster. They gave the Rockets an ass-kicking, but that was expected. Beating the Jazz tonight could be huge for their confidence, but also for my hapiness.

This is a game the Cs should’ve had circled coming into the second half of the season. This will be a rematch from when the Jazz beat the Celtics 122-108 in that brutal west coast road trip. The Jazz were able to move the ball beautifully against our defense and it seemed like everyone on the Jazz was able to hit threes with ease. The Jazz hit 18 threes and had 28 assists, while Joe Ingles had a season high (at the time) 24 points and Mitchell added a hefty 36 points and 9 assists. The Celtics hung in there only being down 108-103 with 3:30 left last game, but ultimately fell short. It wasn't the Celtics' best performance, but they still held their own for most of the game. They need a few more things to go in their direction tonight to secure a win.

One of the keys to tonight’s game will be Kemba Walker’s performance. Last game against the Jazz, Kemba was at the peak of his struggles. He had a measly 7 points on 2-12 shooting, adding 4 rebounds and 7 assists. He also got blocked a whopping 4 times that game; he didn’t only get blocked in the paint, but he was getting blocked on his pull-ups too. The Jazz were all over him that game, so they will probably stay aggressive against him this game too. This isn’t a new thing, teams have been able to shut off Kemba Walker successfully.

Brad Stevens reiterated that the Celtics need to do a better job of helping Kemba Walker. That’s been a theme from Stevens.

Brad has been talking about helping Kemba Walker get easier shots, so tonight we need to see them openly try and keep Kemba more involved. He needs to have a consistent volume of shots, meaning he should be taking at least 3-5 shots a quarter at least. I would like to see him change his game up a little bit because they were able to catch on to play well against his pull-up shots. I want him to still take those pull-ups off high screens, but I’d like to see him drive more and potentially have the centers set some low screens to seal out Gobert as much as possible so Kemba can get some cleaner looks at the rim. When he stays involved shooting the ball, that not only keeps him fresh, but it also opens up the passing game for him. When he’s in the zone, he is very good at playing the two-man game with centers on the pick and roll; he is able to draw the defenders on picks and sneak a pass to the rolling centers. The Celtics are 7-2 when Kemba scores 20+, so I think it’s in their best interest to keep him involved in an effective way.

Another key for this game is matching up with Rudy Gobert. Last time these teams met, Gobert had an easy 18 points (8-9 shooting), 12 rebounds and 3 blocks. Theis played 28 minutes and Thompson played 25 minutes, while Robert Williams only played 12 minutes in that game. The Robert Williams uptrend has been legit and Thompson is out tonight, so he will have a lot more time on Gobert. He has been playing some of his best basketball lately, so I’m curious to see how he matches up against one of the league's best centers. I don’t think he’ll necessarily win that battle, but I want to see him at least keep up with Gobert on both sides of the ball. Gobert scored five points on 2-2 shooting against Timelord last game, so I’m hoping Rob wants in on that revenge tonight.

Arguably the biggest key to beating the Jazz tonight is to play smart and poised on both sides of the ball. Offensively, it’s tough to go against Gobert in the paint, but they should still want to attack the inside. Jaylen and Jayson shouldn’t have that many issues with beating their defenders 1v1, so they should be drawing people on their drives and kicking the ball effectively this game. We just need the bench guys to hit their shots (looking at you Semi, Grant, Pritchard and Teague). Also as usual, we will need to keep the ball moving tonight. The Jazz are aggressive perimeter defenders, so we can’t afford to keep the offense stagnated.

Defensively, it’s all about getting out to the perimeter. They have a bunch of offensive players who can launch it from the outside and they are able to move the ball very well. The Celtics will need to get their hands in the passing lanes and get out to the perimeter as fast as possible, or they will pay the price. This game will be different on the defensive end because the Celtics will have Marcus Smart covering Donovan Mitchell for a good portion of time, taking some pressure off Kemba’s shoulders. Kemba covered Mitchell for 5:16 last game and allowed 12 points on 4-6 shooting. Having Smart on Mitchell will make a big difference on Kemba's game, allowing him to focus on the offensive end.

It should be a good one in Boston tonight, hopefully. On a personal note, I’m getting pretty annoyed with all these trade rumors though. It seems like the Celtics are involved with everyone that is on the trading block, yet I doubt they will even make a big move at the deadline. We will probably end up with Wayne Ellington or someone like that. Take all these rumors with a grain of salt, people. Don't get your hopes up too high.

Refreshed and re-focused since the All-Star break ⚡ pic.twitter.com/bfuAmgS5Vb