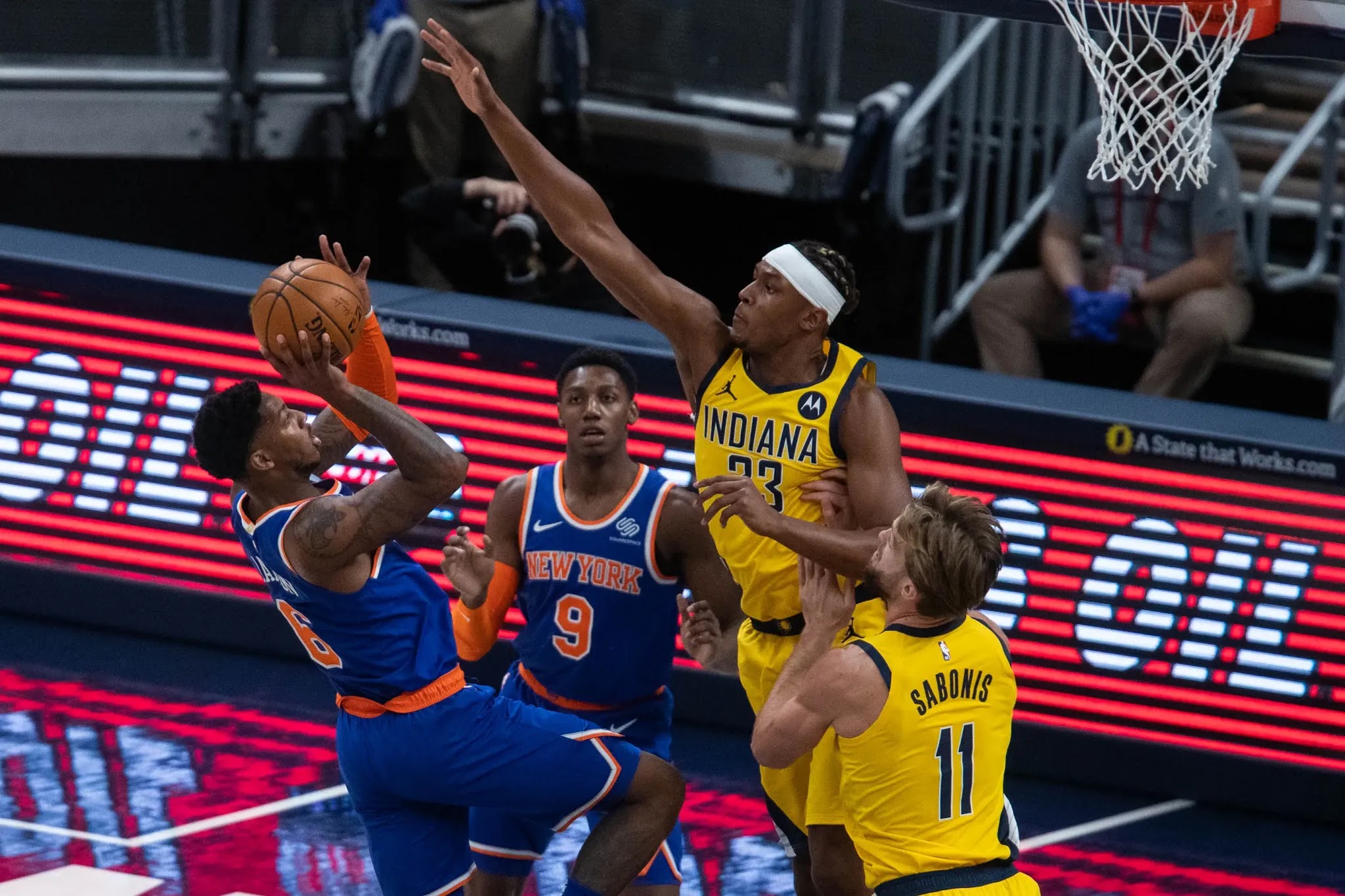 It’s hard to play two bigs at once in today's NBA. One of the two is forced to away from the hoop on both offense and defense. That player has to defend quicker players and on the offensive end he can't use his size advantage in post-ups because he has to stay away from the hoop for floor spacing. The Pacers have tried to make things work with Domantas Sabonis and Myles Turner since both players are very talented. Sabonis plays down low and is the All-Star while Turner is malleable defensive backbone.

When Turner shares the floor with Sabonis, he plays out on the wing. When Sabonis needs a breather, Turner plays the 5. The Pacers long resisted offers to trade Turner, but reportedly offered Myles, Doug McDermott, and a 1st rounder to the Celtics at the start of free agency in a sign-and-trade deal for Gordon Hayward. After Montrezl Harrell spurned the Hornets much more lucrative offer and signed with fellow Klutch client Lebron James' Lakers, Michael Jordan rebounded by upping his offer to Hayward. And since Boston was haggling too much with Indiana on wanting more of a return, Hayward wisely took the sure thing with Charlotte before that offer vanished.

Brad Stevens hints that a trade may be coming soon https://t.co/GqVg76LKAA pic.twitter.com/cp3IMiDXHk

As is usually the case with these things, some sort of spin had to come out in the press that absolved Danny Ainge of any failure. So the story came out that the Celtics weren't fans of Myles and wanted to flip in another deal, but they weren't impressed with the interested around the league. Now if that's true that can mean many things. Could mean Ainge wanted to flip him for an All-Star and teams refused. Could mean Ainge wanted to flip Myles for multiple 1sts and teams refused. But the narrative the Boston press ran with was that Turner was overpaid and no one wanted him. Like he was some negative asset you'd be stuck with. And then you couldn't sign Tristan Thompson who was obviously a better player in their eyes because that's who Danny signed.

So did the apple of Celtics' fans eyes for a years prior to this offseason when Hayward agreed to sign with Charlotte, really become a negative asset that Danny would have found hard to flip? Of course not.


The New York Knicks, L.A. Lakers, L.A. Clippers, Charlotte Hornets and New Orleans Pelicans are among those who have explored whether the Pacers are willing to part with the league's leading shot-blocker, league sources tell IndyStar.


Turner is a defensive force and his contributions go beyond the box score. He leads the league in blocks and yes his numbers would be even greater if he actually got to play center.


Turner may have had just 8 points, 8 rebounds and 5 blocks in Denver, but when he goes to the bench the Pacers just aren't the same team defensively.
When Turner wasn't on the floor, the Pacers were a different team defensively:
Trailing 57-40 with Turner sitting in the 2nd quarter, the Pacers trimmed the deficit to 9 by halftime when he returned.

Turner played the entire third quarter, and the Pacers led 91-87.

Turner sat to start the fourth, and the cushion became a 104-93 deficit before he could come back with 6:15 left.

Doesn't sound like an overpaid player that a team would find hard pressed to find a taker does it? It's possible if Danny Ainge felt Robert Williams was the future in Boston he wouldn't want to add another big. But the first move Ainge made after Hayward agreed to sign with Charlotte's improved offer was to another big man in Tristan Thompson, so that theory doesn't hold much water. The wiser course of action which we said at the time and still holds truth now would have been to acquire Myles and the 1st when you had the chance and then if you didn't like Myles (or preferred Time Lord) you trade him.

The Celtics traded a 1st rounder (Desmond Bane) to aquire two 2nd rounders. They traded two second rounder with Gordon Hayward for the TPE. They signed Tristan Thompson and Jeff Teague. If you weren't going to re-sign Hayward what would you prefer?
Tristan Thompson and Jeff Teague
or
Myles Turner, Doug McDermott, Desmond Bane, and a 1st rounder.
Or put this another way, if you are the Hawks or Kings now which of those two packages would you prefer for John Collins or Harrison Barnes?

Truth is you wouldn't even need to give up as much as option A for either of those players and if the Celtics do acquire either Collins or Barnes it will cost a lot more than Tristan and Teague.
So if you are someone that blindly defends whatever move Ainge makes or doesn't make, once this trade deadline passes. remember that just because the local press tells you Ainge did well, doesn't mean its case. He wins some, he loses some. He and we lost out with his bungling of the Hayward trade negotiations with Indiana.