After an identity stealing, root canal and losing steak having week this W feels good to Stevens 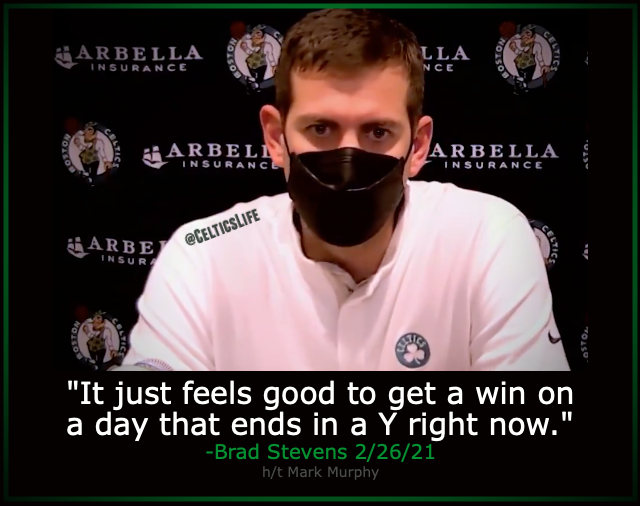 Remember that song, I want to say it was from the 90's, that started, "So you had a bad day..."? Man that's what came to mind when I heard prior to tonight's Celtics vs Pacers game about Brad Stevens' week. Not just talking on the court, but off of it as well.

“I was just telling my wife, I had a root canal and my identity stolen last week and I think those were two of my better days in the last eight days. It’s just been what it is,” the Celtics’ coach said on 98.5 FM’s “Zolak & Bertrand” show.

“It was the real stuff. People were trying to open (credit) cards and all this stuff. Calling Target to open [an] account. Like I would have an interest in opening a Target account right now during this stretch.”

Add in the embarrassing big lead blowing loss to start the week on Sunday vs New Orleans and the back-to-back mid week losses to Dallas and Atlanta respectively and you were Stevens was coming from with his joke. Possibly not a joke though.

Brad Stevens: "It just feels good to get a win on a day that ends in a Y right now."

Happy to see Coach pick up a much needed W tonight. Especially on one of those days that end in a Y.

Celtics get back in win column against Indiana https://t.co/EmAB7YyRr0 pic.twitter.com/TNJBxJI7j8