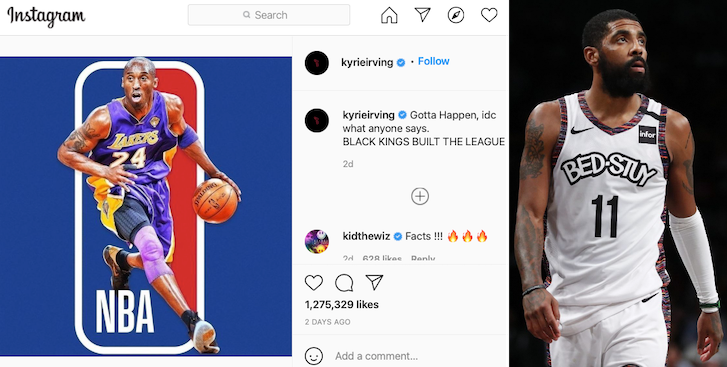 Former Celtics guard Kyrie Irving reignited the Kobe Bryant should be the NBA logo discussion with the above Instagram post this week. Kyrie used a mock-up created by Tyson Beck almost a year ago, who I assume was a big Kobe fan. Beck replied with a joke about how Kyrie cropped out his name (We feel your pain on that Tyson. Used to happen all the time with Celtics Life!) Kyrie responded that he appreciated Beck and I'm sure Tyson appreciated the appreciation.

Celebrities replied with support for Kyrie's post, while there were also complaints from non- celebs about Kyrie's "BLACK KINGS BUILT THE LEAGUE" all caps statement. You don't need to put 2 and 2 together to take from that that Kyrie is suggesting a Black man deserves to be the NBA's logo. Kyrie also responded to that blowback with a follow-up post (see below).

I'll be honest as a young kid I never knew the NBA logo was Jerry West. I definitely had to read that somewhere. I just assumed it was a random generic basketball icon used in a pretty cool logo. To color of the player seemed ambiguous. Now the literal color in the logo is white, but so is the basketball. American logos tend to be red white and blue. I suppose the creator of the logo could have flipped the colors around and made the player silhouette and ball either blue or red. My guess is that red would have eventually become an issue too.

Also while I'm not a graphic designer, I'm thinking that white was used in the middle for color balance. You put red or blue in the middle and white on a side and it looks odd and also fades into white backgrounds. I'm pretty sure the Celtics have a two color logo with a white silhouette in the middle of a green circle. Again if you flip them then the circle or basketball would fade into any white background.

So the creator of the NBA logo did use Jerry West as his inspiration and interesting enough West has been kind of embarrassed by it. I believe I read he's more of the quiet, humble, doesn't want to be on stage type. He's said he's cool with not being the logo. And this was years prior to Kobe's death. My main issue is if you're going to change the logo, I don't think it should be Kobe. He's not the greatest to ever play the game. He was a top 10 player for sure. Maybe top 5 if you tend to focus more on modern players (which I believe is unfair, but whatever). But the logo of the league shouldn't be the tribute for a man who died way too young. They honored Kobe with the All-Star game MVP award and everyone wearing #24 and #2 for him and his daughter last season. If they want to honor him so more, so be it.

I do think we often make martyrs out of people who die before their time a bit too much. Like Kobe was a flawed man and player. And most rationale people who aren't biased by Kobe's celebrity or whatever believe he did something very wrong in that Colorado motel. I mean he even wrote an apology letter. I'm sorry celebs get accused of sexual assault quite frequently. You don't pay someone off and admit fault if you're completely innocent.

If the Kobe rape case had come up during the MeToo movement who knows how different his legacy would be. And I'm not discounting if Kobe used that "close call" in his life to reflect and become a better man, husband, father, etc. Just saying it's not like he was a saint.

If your goal is to have a Black man be the inspiration for the logo then you should be asking for Bill Russell. But honestly I'm pretty sure Russell has never asked for that. It's a logo. It really shouldn't be one person.

Regarding anyone being racist back to Kyrie for using the term Black King or saying Black people built this league, well as much as I'm not a fan of Kyrie that isn't cool. Being a bigot back is never the answer. Also I think people should be allowed to express their opinions. And it is a fact that if you look at the top 20 NBA players in history a lot more are Black than White. Personally I don't think a logo should be a race, but let Kyrie have an opinion. 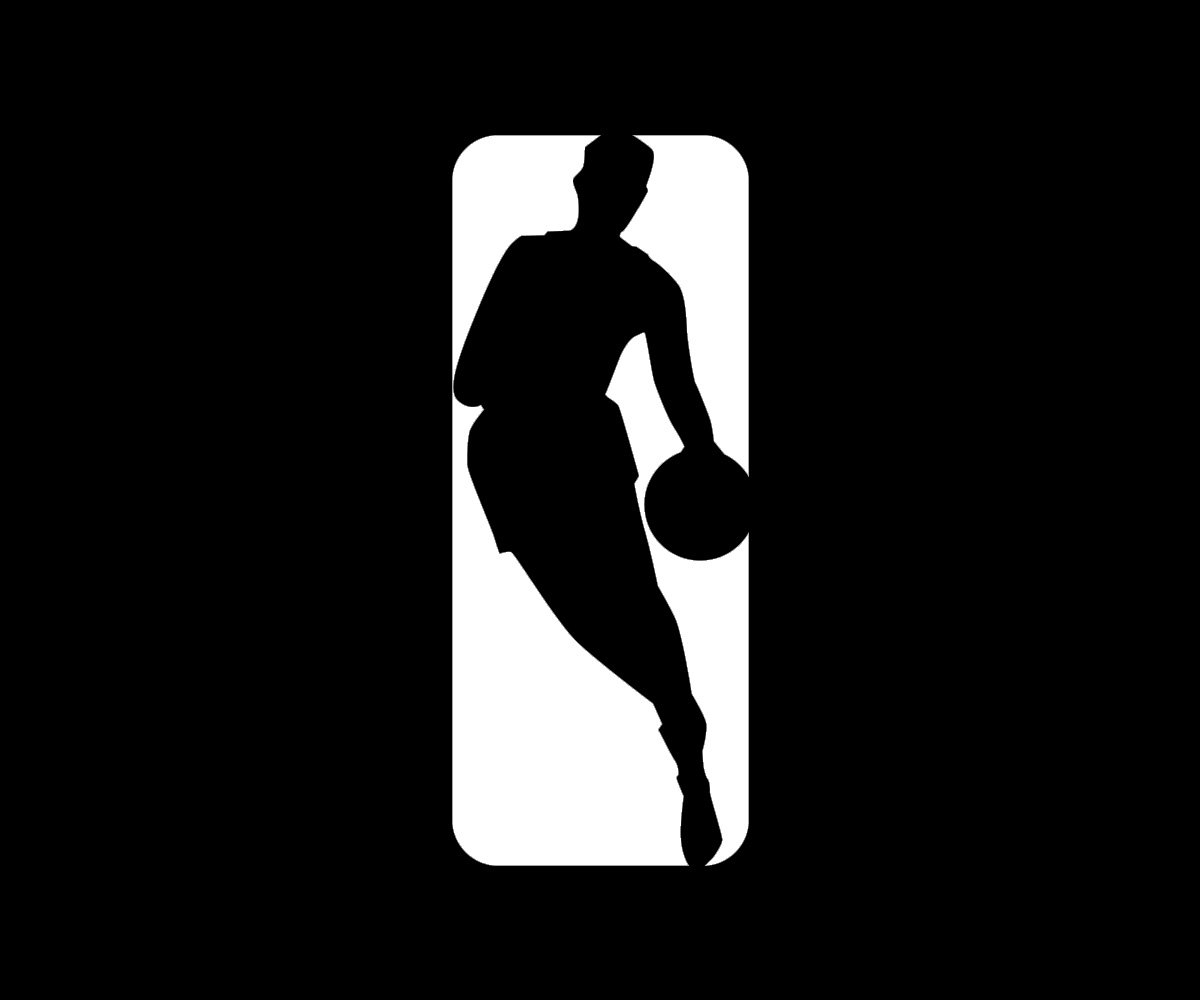 And the "Black Kings" thing shouldn't upset anyone either. Nothing wrong with Black pride. Confidence in oneself is good. You're more likely to achieve greater things. Not sure a White racist should be able to simultaneously bash Kyrie for this but also mock poor Blacks in America for let's say government assistance. 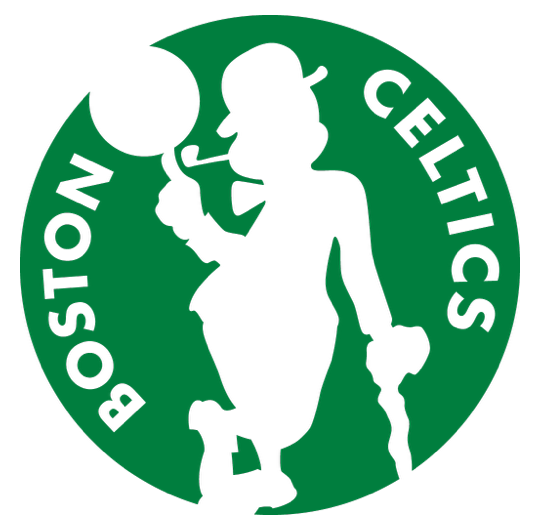 My opinion and hopefully I'm allowed to have one is that the logo whether it was initially inspired by a player or not doesn't scream "White man" to me at all and I don't think a logo should be a race. The one Kyrie and others are pushing is not only obviously more race specific, but it literally is a picture of a player. Like that latter part makes it even wilder to me. 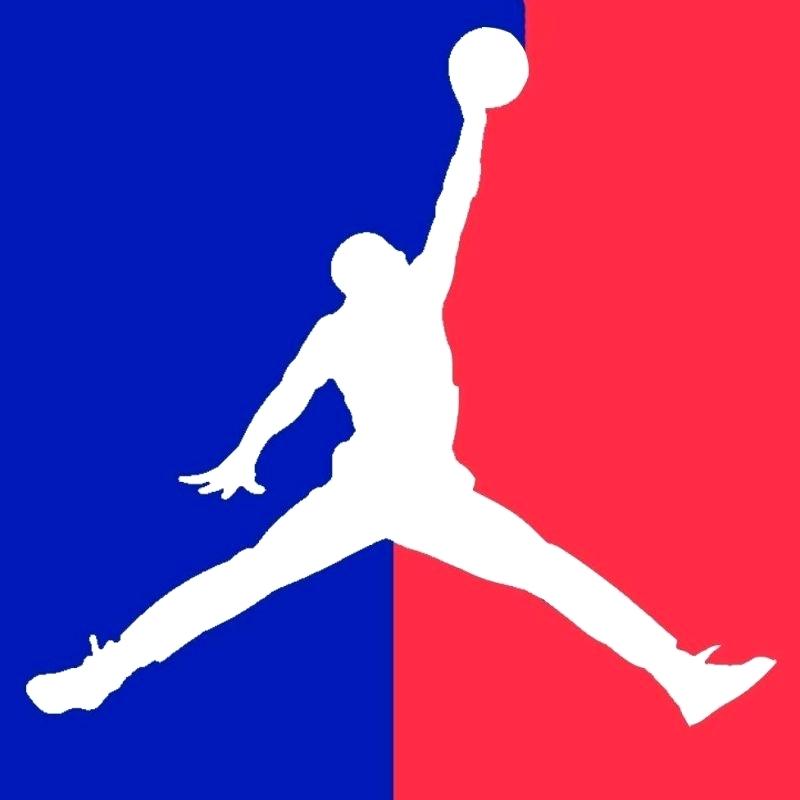 The NBA is a business. If they decide to update the logo, because they think it isn't "cool" enough or whatever then so be it. Personally I like the classic Celtics green and white uniforms so I'm not one that likes to mess with something that isn't broken or is well regarded. And I'm pretty sure prior to Kobe passing, the NBA logo was considered the coolest of all the logos. I do wonder if the NBA will change the logo sometime soon not because there is anything wrong with the logo, but because they will think they will get a lot of love for making the change and being the most "progressive."

If they are going to go that route then use a silhouette of Bill Russell or broker a deal with Michael Jordan and just use his Jump Man logo. I mean the reasons for the change will feel more forced or maybe even like pandering, but despite the tragedy of Kobe Bryant dying young, in my opinion he's not the Black man to recognize for that honor.

Kyrie Irving further echoes his call for Kobe Bryant to be the new logo of the NBA:

"Kobe Bryant. Logo. Yes. Needs to happen. I don't care what anyone says. Black kings built the league. That's exactly what I meant, it's exactly where I stand" pic.twitter.com/s21zowRjdg