Who Rocked It Best? Number 8

Last Sunday saw the season debut of Kemba Walker, who returned to the floor against the Knicks following offseason knee procedure.  Although the game result wasn't as pleasant as expected, Cardiac Kemba gave a good account of himself (9 pts., 3 rebs., 4 asts., 3 stls.) and says he's "pain-free" for the first time in a long while (even though he incurred a hip check injury during the game).  To celebrate Kemba's return, we put him up against other past Celtic 8s, and let you decide who rocked the number best: Kemba, Antoine Walker, Scott Wedman, or Jeff Green.
'Toine has the distinction of wearing 8 not once, but twice.  The C's first rounder (6th overall) of the '96 draft, Walker's first run with 8 came as the original running partner of Paul Pierce, as he was among the team's leaders in scoring, rebounding, and passing through the '03 season.  And even though he helped lead Boston to the ECF in '02, Ainge traded 'Toine to Dallas in '04.  Following a short run with the Mavs and Hawks, Walker was traded back to Boston in '05, where he donned the 8 again (after first wearing 88, then getting the 8 back from Al Jefferson).  The next summer, though, Walker was traded to Miami, where he wound up helping the Heat to their first NBA title.  For all of 'Toine's talent and achievements, though, he may unfortunately be best known for losing his career $108M earnings (and selling his championship ring) and ending up in bankruptcy.  But Walker slowly worked his way back and in 2013 announced that he was finally debt-free.
Wedman is the only one in this group to boast of not one, but two championship rings.  The sweet-shooting Scottie earned his NBA paycheck as a proficient shooter, making 48% FGs, and 34% 3FG way back in the pre-Steph Curry, 3-point-happy era.  Wedman was most productive statistically early in his career ('74-'81) as a star with the Kansas City (now Sacramento) Kings.  He slid into a reserve role when he joined the C's in '82, and boosted the second unit offense to help win rings in '84 and '86 behind the Bird/McHale/Parish Big Three.  He may be best known for his performance in Game 1 of the '85 Finals against the Lakers (a.k.a the Memorial Day Massacre), when he shot a perfect 11-of-11 from the field, including 4-of-4 from three to help the Celts to a 148-114 victory.
Green was a Boston and CelticsLife fan favorite for his triumphant and successful return from heart surgery.  Acquired from OKC in 2011, Uncle Jeff was later found to have an aortic aneurysm which led to crucial heart surgery which caused him to miss the entire '12 season.  Upon his return, though, Green came back stronger than before and was averaging a career-best 17.6 ppg by 2015.  His remarkable return spawned the nickname Iron Man, which speaks to the arc reactor-like strength of his heart post-surgery,  At age 34, Jeff continues to be an NBA contributor but through his many many stops none would be more memorable than the four seasons he rocked the 8 in Boston.
Kemba joined the team in 2019 as one of the biggest free agent signees in Celtics history ($141M, 4 yrs.), and one of the bigger coups Ainge had managed as GM.  Taking over the starting 1 from its previous, disgruntled and discordant inhabitant, Kemba provided much harmony and unity among the young, talented core.  With his infectious smile, and late-game winning skills, Cardiac Kemba is surely a worthy wearer of the 8.  But will he be the reason no one else wears the number again in the future? 😉
So of this group, which 8 is the great(est)?  Let us know! 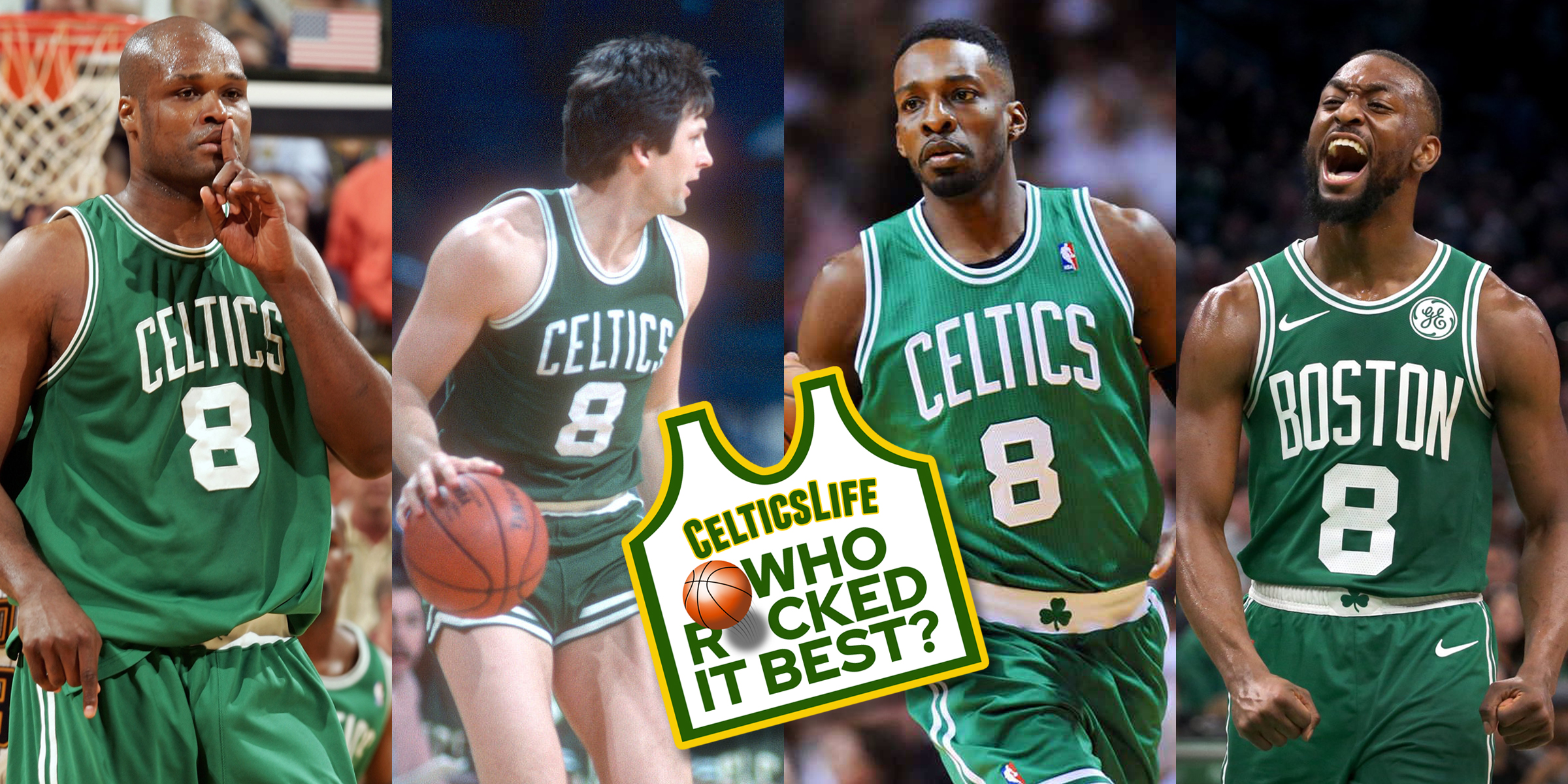