The Celtics are getting the gang back together 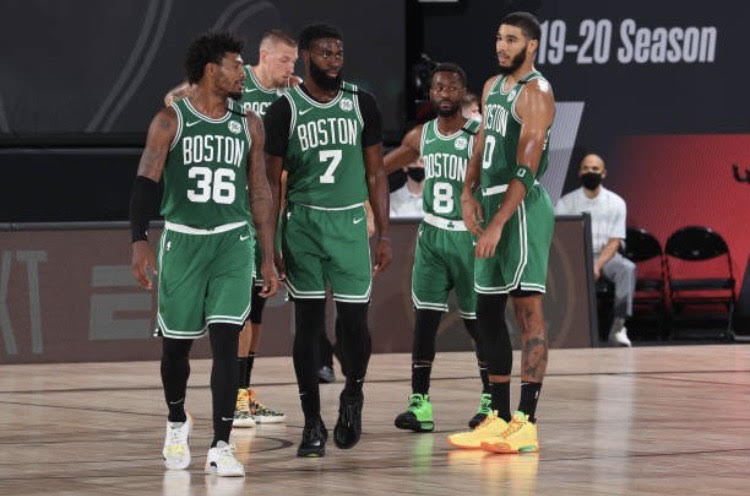 The day is finally here, the Celtics finally get their core four together. Honestly it’s felt like a long season so far and it’s been tough to see where the Celtics are at because we haven’t seen what they would be like with a healthy roster. It’s not like the core four has changed since last year, even with Hayward it felt like Kemba, Jaylen, Tatum and Smart were the guys. This is exciting for the squad because the Celtics can finally hit their full potential. It could take a little while for the team to adjust, but having all the core guys healthy will get the chemistry back up.

Daniel Theis on having the full starting lineup back on Wednesday in San Antonio (if that game occurs):

"We've been waiting for this day for a long time."

Having the core four together healthy seems like a hack. I honestly think they are the best assortment of four players in the league right now, besides the Nets big 3 and Joe Harris. Through watching the first 16 games this season, it looks like the four guys have shown development in at least one way from last season. The most obvious player to improve has been Jaylen Brown. Jaylen’s development into an All-Star is looking legitimate so far and it's awesome (cast your vote tomorrow at noon for Jaylen to make the all-star game). So far he has career highs in points (27.3 PPG), FG% (53%), 3pt FG% (43%), eFG% (62%), TS% (77%), assists (3.4 APG), steals (1.5 SPG) and PER (25.9). He's shown improvements in like every catergory. Honestly, these numbers could be sustainable because his game is so reliable. He gets to where he wants, he takes high pecentage shots and his confidence is through the roof.

Tatum has improved in points per game this year (26.6 PPG), but he isn’t scoring as efficiently as he could be. He gets his open looks already, but just misses more shots than he should be. He's shooting 47% when he should be shooting around like 53%. Imagine how open his looks are going to be when the opposing team has to worry about Jaylen, Kemba and Smart being on the floor at the same time. I assume his scoring efficiency will go up when the team is healthy. His biggest improvement so far has been in his passing game. This is what he needed to improve in most before the season to reach that next step, and with a healthy core I think his passing will get better. He only averages 3.9 APG, but his vision and capability to read a defense has increased a good amount. I mean look at this pass:

if Jayson Tatum is making passes like this, good luck with dealing with him in PnR. Left-handed pass off the dribble to the corner? pic.twitter.com/XreTT8mhUw

Speaking of improved passing, Marcus Smart looks like he is one of the best playmakers in the league right now. He throws behind the back and over the head passes effortlessly but also very accurately. He averages career highs in assists (6.2 APG), which also ranks 15th in the league. Jaylen and Smart are also a top three duo in field goals and points generated together. Smart also has a career high in points so far (13.6 PPG), but I assume that will change because he won’t take as many shots for the most part with the core being healthy. He will still have a big part in the offensive due to his playmaking abilities so far, but his focus will probably transition more to the defensive side of the court. Smart has a career high in steals this year (1.9 SPG), but career low in defensive rating (110).

Now there isn’t much to talk about for Kemba in terms of stats, but he is playing noticeably different to start the season. The most important part of his game is coming off the high screens to hit pull up threes, but he wasn’t able to get to those spots as often last year in the playoffs. Now, he gets to that spot with ease and it is pretty unguardable. He looks quick, energized and just straight up healthy. His biggest improvement that I’ve seen so far compared to last year is his activity on defense. He has a great ability to read offenses and pick off passes. He was always a gritty defender, but his health affected his defensive capabilities. I will admit, watching Kemba play makes me understand why he has bad knees because that man throws his body around more than any player I’ve seen. I'm glad that the Celtics are not playing him in back-to-back games, because his knees could definetly use the rest.

Now, some people may think about how the core being healthy affects each other’s scoring numbers. Well the great thing is that Brad Stevens usually keeps at least two of them on the court together at the same time, so their scoring numbers shouldn't take that much of a hit. But, there are other questions that arise. Now that we have a healthy core, who is going to take the last shot? Probably still Tatum, but don’t you try giving it to Jaylen after how he’s been playing? Or do you give it to Kemba because you know, Cardiac Kemba? Also what will the starting lineup look like? Does Smart stay in the starting lineup, because he has deserves it, but at the same time the Celtics could benefit with him on the bench. If not, who goes to the bench Theis or Thompson? Right now, I would say Thompson to the bench. Also who's minutes are going to take a hit? The bench is already very competitive and now there are less minutes to go around. This could mean more DNP's from players who need playing time to develop like Grant, Timelord and Nesmith.

It’s exciting that we finally get to see the four guys play together tonight against the Spurs. It’s tough because they are getting thrown right into the fire on a seven game west coast road trip. Let’s aim for them to go 5-2, but settle for at least 4-3. They should beat the Spurs, Warriors, Kings for sure. Then between the Jazz, Suns, Lakers, Clippers I hope that they can at least 2-2. This road trip should give us a good idea on how good the Celtics actually are.

Marcus Smart: "We’re all excited to have everybody back on the floor playing. We’ve missed this for a very long time."