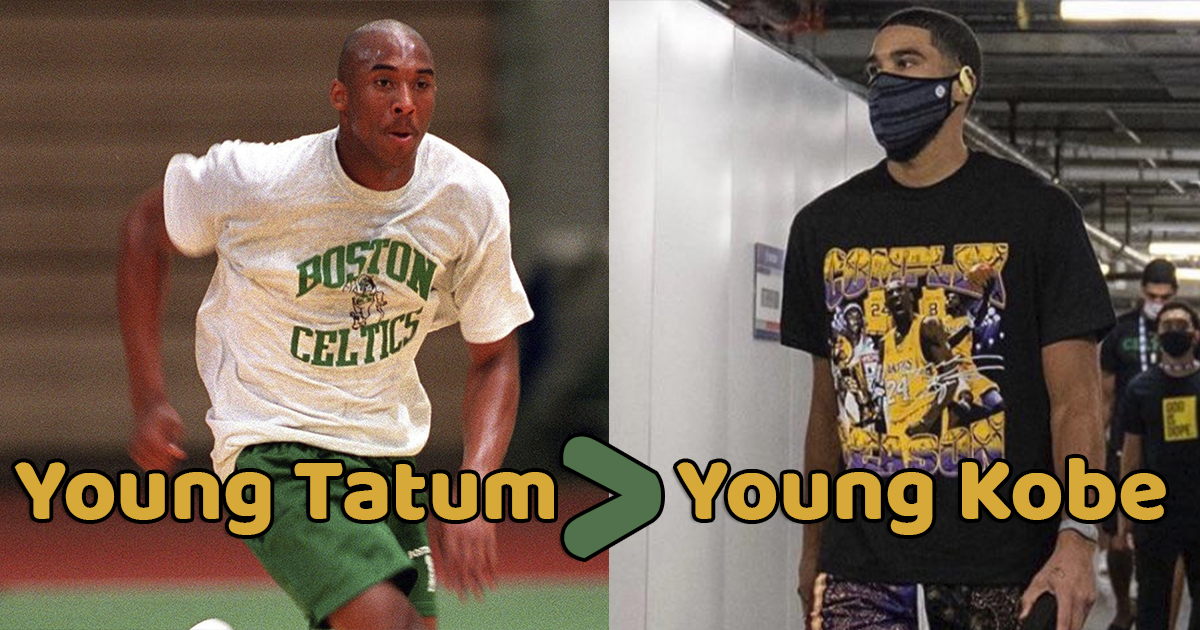 Note: We discussed a lot of this in the most recent episode of The Celtics Reddit Podcast.

In 2007, Jemele Hill rose to fame by writing a dumpsterfire of an article on ESPN titled "Putting Kobe in perspective". In this pure piece of harebrained hogwash, Hill had the audacity to claim Kobe Bryant was better than Michael Jordan.

Kobe Bryant is better than Michael Jordan. Not more successful. Hasn't had a bigger economic impact. Hasn't won more MVPs. Hasn't won more titles. But he's a better player. Kobe can do everything Michael did, and even a few things Michael couldn't do. Kobe is just as good a defender. His killer instinct is just as pronounced.

Now long after, Hill got suspended for saying, "rooting for the Celtics is like saying Hitler was a victim." Complete stupidity from an absolute imbecile of a person. Just outright idiocy.

Young Jayson Tatum is better than young Kobe Bryant. No, not more successful. Not more MVPs or titles. But young Tatum can do everything young Kobe did, is just as good a defender, and has the same killer instinct.


Look, I'm only partially joking. I recently wrote an article here at CelticsLife defending Tatum's failed game-winning attempt against the Pacers. The step-back three came off a broken play where our first option was denied by Indiana's defense. While not an ideal shot, it was a clean look for Tatum. Boomers like Scal might believe these step-back threes are ruining the game, but it's a shot Tatum has consistently proven capable of getting off cleanly and making. The shot didn't bother me. A key point I made in this article was that the late-game "heroes" we remember like Pierce and Kobe actually missed far more game winners than they made. Kobe, in particular, shot an awful percentage in those late game situations. We just remember the ones he made. It was a credit to Tatum he was willing to step up in those big moments. In his defense, I shared a relevant quote from a Kobe apologist: “Clutch isn't just about percentages, it's about mentality, not being afraid to take the last shot.” I concluded this article with the prophetic statement, "The hope is these Tatum attempts will pay dividends down the line over what we can hope is a hall of fame career with plenty of game winners." Flash-forward a week later and Tatum was casually knocking down his second game-winner of the season. King shit.

Alas, several of the fans following via the CelticsLife Facebook group were displeased I dare reference Tatum in the same sentence as the legendary Kobe Bryant:

Listen, fellas... I fully understand that Kobe was a beloved icon of a generation. We lost him way too soon. Genuinely tragic. For a certain age group, he's sacred and me writing this article is bound to offend some of you. I don't intend this to insult Kobe or his legacy. But the truth is, Tatum is the same age Kobe was on those early 2000s Shaq title teams and he's arguably better than Kobe was at the same age. The fact you so readily dismiss this as nonsense kind of encapsulates what I believe is the weird underrating of Tatum's current superstar ascension by many Celtic fans. Let's actually go through the exercise of comparing them as a means of "Putting Tatum in perspective". 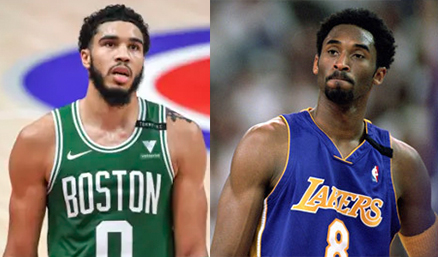 Start by just looking at their counting stats.

You'll note that Tatum averaged more points, more rebounds, and less turnovers despite getting 4 less minutes per night. In terms of efficiency, Tatum was a significantly better shooter than Kobe. Kobe, who was a career 33% three point shooter, only shot 32% from three that year. Tatum, on the flip-side, is one of the best three-point shooters in the league and shot 40%. This resulted in Tatum having a higher True shooting percentage (56.7%) than Kobe did at the same age (54.6%).

Also fair to note here that Kobe actually had an additional year of NBA experience under his belt, having jumped straight to the pros from High School. I generally disregard this to instead compare players based on age. Players make significant leaps between the ages of 18-23 as their bodies mature into adulthood. That development will happen regardless of whether they got their reps in NCAA, NBA, overseas of G-League. It's actually one of the reasons why 4-year Senior Payton Pritchard is looked at as slightly different from the rest of our rookies, given he's actually already older than Tatum. Hence why teammates like Grant Williams half-jokingly refer to Pritchard as a "vet".

You might scoff at these numbers given the pace of the game has changed quite a bit in the 20 years since Kobe was the same age as Tatum. I could, instead, share numbers adjusted per-100 possessions. Even so, 21 year old Tatum comes out on top:

Beyond just counting stats, let's talk about actual impact on the game. As a 21 year old, Kobe was selected to 2nd-Team All-NBA. Partially a popularity contest, of course. Two years prior, the world-famous Kobe somehow managed to get selected as an All-Star despite only averaging 15 points as a 19 year old coming off the bench. You can partially credit his early anointing as Jordan's heir, a Tonight Show appearance, and his friendship with Brandy for that one, but by age 21 he was a worthy 2nd-Team All-NBA selection. Similarly, Tatum managed to get selected to All-NBA 3rd team. Truthfully, he should have been a 2nd-team selection as well, but he was snubbed in favor of Pascal Siakam... a choice that is increasingly looking ridiculous.

In terms of advanced stats, Tatum's +/- net rating was consistently the highest on the team. His defensive rating and defensive win shares were highest on the Celtics and top 10 in the league. While Tatum failed to make an All-Defense team, it's worth noting that he received the 14th most points in voting and probably would have made it had his position not been loaded with defensive talent (Kawhi, Bam, Giannis and Davis were the forward selections).

So we're talking about a player who, at least at the age of 21, could genuinely be called superior to Kobe Bryant at the same age. About the only thing Kobe did better was generate more assists, which tends to happen in a isolation-heavy offense where one of your options is dumping it down low to the unstoppable Shaquille O'Neal (side note, dig into the advanced stats there and you'll see that even in their final season together, Shaq was carrying Kobe. 82games pointed out Shaq was +57 without Kobe while Kobe was -67 without Shaq).

In the playoffs, it was more of the same. Yes, Kobe won a ring as the Robin to Shaq's Batman, but Tatum managed to carry his team to the ECF. Compare their performances in those two playoff runs and once again, it's fair to say young Tatum outclassed that legendary Kobe run:

Same story here. Tatum averaged more points, more rebounds, more assists while shooting a significantly higher percentage than 21 year old Kobe. There's a genuine case to be made that Tatum was ahead of Kobe at the same age.

We're just 8 games into this season. It's still early and a lot can happen. We're coming off two remarkable games. One in which Tatum was doubled on nearly every possession and responded by putting up 12 assists (0 turnovers) with four massive plays down the stretch including a game-winner. The other, Tatum casually rolled out of bed and dropped 40 on the Raptors. As Tatum continues to see more double coverage, he will likely see those assist numbers creep up. Notably, he averaged 6 assists in his final playoff 12 games last season. Kobe Bryant at age 22 took his game to an even higher level. Again, it's EARLY, but at least based on this tiny sample size, barring major injury, Tatum seems poised to do the same. Compare Tatum's stats through 8 games to Kobe's:

Once again, given that Kobe played significantly more minutes, a standard Per-36 adjustment would result in Tatum having vastly superior stats. More fair would be taking a look at the per-100 possession stats again:

So roughly the same points, more rebounds, and once again a significantly higher true shooting percentage (58.5%) to Kobe (55.2%). Granted, this entire post may jinx my main man, but so far, it's pretty clear that Tatum is following that Kobe Bryant path in the best way possible. Taking it a step beyond that, it's not just Kobe you can compare young Tatum to. Tatum's on pace to outperform 22 year old Dirk, he's basically dead-even with what 22 year old Durant did, and he's far beyond what 22 year old Pierce did. Pierce didn't even make an all-star team until he was 24 years old. If we're being serious here, you can make a case that 22 year old Tatum, given his impact on both ends (Pierce was never much of a defender pre-KG), is arguably better than Paul at his absolute peak.

Bottom Line: Tatum is in the midst of a genuine superstar ascension. He's doing it alongside another budding young star in Jaylen Brown. Let's try to appreciate what they are doing out there and not underrate how fortunate we are to be following these guys as they both follow paths to greatness.