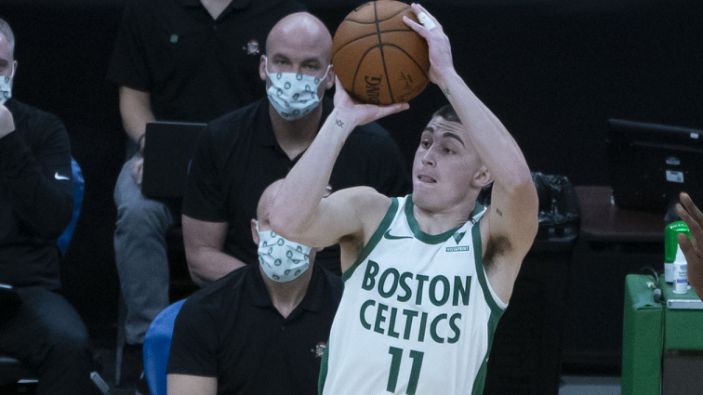 As I have mentioned before in some of my posts, it has been tough for certain players on the team to develop a role on this year’s roster. In the Celtics win against the Raptors, basically every role player stepped up. Grant, TimeLord and even Semi all played great, but yet again the person other than Tatum and Brown to stand out is Payton Pritchard (or FastPP if you will).

Payton Pritchard is the steal of the draft, simple as that. pic.twitter.com/LacfgSNU8o

Common adjectives to describe Pritchard so far: poised, confident and surprising. With the absence of the Celtics three top guards, the Celtics looked for Pritchard to be a solid fill in for the night, and he overachieved. He put up a stat line of 23 points (the most by a rookie this season) shooting 61.5% from the field, 50% from three and hitting all of five of his free throws. He also added a team high 8 assists in 32 minutes of play. FastPP is the first Celtics rookie ever to score 23 points with 8 assists off the bench. This is his eighth game as an NBA player by the way. So he did a little more than just fill in at the PG spot.

It obviously hasn’t been just this game though, since day one he has been proving people wrong. A lot of people (including myself) didn’t think the 26th overall pick would make this much of an impact this early, but here we are. Game one we saw Pritchard get 13 minutes against the Bucks and he immediately looked like he belonged. He plays with a tremendous amount of confidence and hustle, which made it easier for him to gain Brad’s trust. Then in his homecoming mini-series against the Pacers, he showed glimpses of what he is capable of. He scored double-digit points in both games and was a key part to the Celtics win in the second game where he kickstarted a fourth quarter comeback. His performances in his first few games show that his game against the Raptors wasn’t luck, FastPP can hoop.

Again, I totally didn’t see this coming but now he is a strong contender for rookie of the month. I mean this is great, the Celtics needed a young guy like Pritchard to come onto this team to provide scoring and energy. But what happens when Kemba comes back and the team is fully healthy? On paper, Pritchard is the fourth guard on the rotation behind Kemba, Smart and Teague, so how will he fit in or will he be able to get a spot in the rotation? It’s tough because the players already have established roles, but FastPP is like the fourth or fifth best player on the team right now so how does he not earn a role?

Only time will tell what will happen to the rotation when fully healthy because Pritchard could easily slow down in terms of efficiency and results. But let’s go through some hypotheticals just for fun. So, let’s say that he keeps up at the pace he is at right now. He won’t take Kemba’s or Marcus’s spot, but taking some of Teague’s minutes and becoming the backup point guard isn’t out of the question. I really like Teague and what he brings to the team, but if we’re being honest Pritchard has a higher ceiling than Teague. Mostly because Pritchard is younger and a more aggressive defender with similar offensive abilities to Teague. Let’s say that this does happen and it happens soon, then all of a sudden Teague becomes a potential trade piece around the TPE and trade deadlines. My reasoning behind this is that Ainge wanted Teague to come in and be a scoring backup point guard for a year, but if we have that with Pritchard then that could mean Ainge might want to include Teague in attempts to get a more impactful player. I’m speculating here though with all the trade stuff, but I feel like that’s a possibility.

"We're going to ask him to do a lot right now. ... He's going to have to be consistent for us for us to have a chance to be a good team."

Now let’s say Pritchard stopped playing at the level that he did, then nothing really bad happens to Pritchard. He’ll get stashed for depth and will continue to learn from his teammates. I already think FastPP gained enough trust from Brad that we will see him in most games from this point on. I think the situation that will most likely happen is that Pritchard and Teague get a similar amount of minutes and share a backup PG role. The 22-year-old brings more energy to his game, so I think it is more likely that we see him getting more important minutes. For now, let’s hope that he gets that starting role until Kemba gets back so we don’t have to deal with that double big lineup as much anymore.

It has been fun to watch Pritchard’s hot start to the season, but let’s focus on the most important thing: his nickname. NBC Sports Boston has been pushing “P-rabbit” and I’ve heard Tatum call him “8-mile”. Those nicknames are alright but they seem too easy. As you guys have noticed, I’ve been calling him “FastPP”. I don’t know how it happened or why it’s this but it just makes sense. So if you get anything out of this post, then it is that Pritchard’s nickname should be FastPP. Pass it on to your friends.