How the Jays showed progress toward superstardom 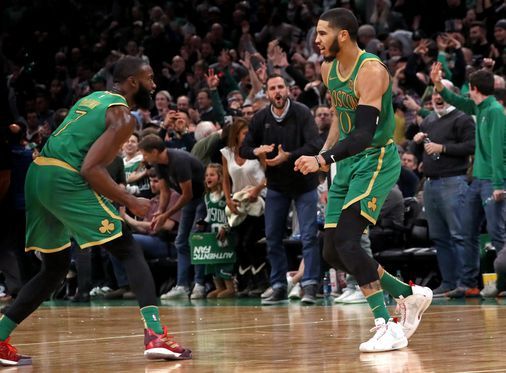 Jayson Tatum and Jaylen Brown took huge leaps in their career last year. Both players being drafted by Ainge in 2016 and 2017 led them to developing together and going through some important experiences at such young ages. They have been through an ECF against Lebron, a disastrous 2018-19 season, an Olympic run and a pandemic bubble. They have seen it all, but they’ve been through it together.

Their relationship is key to their success because they hold each other up to some high standards. They constantly compete hard with each other at practice, trying to make each other the best players they can be. It is noticeable how far they have come in their development when a veteran like Jeff Teague comes in and comments on their skill level:

Jeff Teague on his early impressions playing alongside Jaylen Brown and Jayson Tatum: "They’re the players that I thought they were. And I think they’re both superstars."

Teague mentions that the two players have hit superstardom already, which is a debatable statement. They have both come a long way in their young careers and it is possible that they can be superstars after this season, but there are some skills they need to improve to reach that next level status.

Let’s start with Jayson Tatum, who is the statistically superior player out of the two. The 19-year-old had a usage rating of 28.6% last year and improved in almost every category from scoring to rebounds to steals. He also posted a career high 20.4 PER and got his first All-Star and All-NBA nods. We saw Tatum at his peak performance so far in the playoffs, where he averaged 25.7/10/5/1/1 per game.

Tatum matured last year and displayed confidence in his game. His most noticeable improvement in his game has been his defense. He became one of the best off-ball defenders in the league, always seeming to get his arms in the passing lanes disrupting the opposing team's rhythm. Even his on ball defending was impressive, playing a part in shutting down Siakam in the playoffs. Tatum also spent more time driving to the rim last year, weaving through defenses and using his length to his best abilities. Then Tatum developed his iconic and unstoppable side-step three point shot, which was always fun to watch.

I would say Tatum is pretty close to superstardom already in his young career, but not quite there yet. This season we need to see Tatum distribute the ball like he was in the playoffs. Hayward played a large role for the Celtics in the playmaking department, but with his absence Tatum will need to step up. It should be something that will be easy for Tatum this year because he is going to get doubled a good amount, so all he needs to do is find the open guy and keep the ball moving. Tatum also just needs to be a little smarter with the ball in general by just knowing when to pass the ball. We don’t need him taking mid-ranges while being double covered anymore.

Moving on to Jaylen Brown, who is the more mature player out of the two. Jaylen showed a similar improvement statistically as Tatum, increasing in points, rebounds, steals, field goal and free throw percentages. Jaylen also put up career highs in offensive rating (110), PER (16.9) and usage rating (24.7%). We also saw Jaylen at his peak performance in the playoffs averaging 21.8/7.5/2.3 on 48% from the field and 36% from three.

In the 2018-19 season Jaylen was in and out of the starting lineup a bunch, so it was nice to see him have a more consistent role on the 2019-20 squad. Jaylen’s most noticeable improvement last season was his ball handling for sure. Through the first couple years of his career I thought he would just be a great 3 and D guy, but then he pulled some crazy handles out of his bag and now it’s obvious that he is more than just a 3 and D guy. Jaylen was also very good at finding spots on the floor that he was comfortable scoring at. He made a living at shooting corner threes and he is also a short range fadeaway wizard. Also it is worth mentioning that Jaylen is one of the smartest and progressive athletes in the world right now, so props to him for using his platform the way it should be used.

Jaylen finally got comfortable with his game last year and can continue to develop into a superstar this season. The 24-year-old also needs to find a way to distribute the ball a little more next year. He will be doubled less than Tatum, but he will still be guarded by some of the league’s best defenders so he needs to find ways to get rid of the ball quickly. Something else I would like to see from Jaylen is more isolation ball from him. He’s always had the speed and athleticism to keep up with the other SG’s/SF’s in the league, but now he’s developed a more diverse skill set coming into his fifth year. There should be more opportunities for Jaylen to go 1-on-1 with defenders because it will also help him find ways to score from all over the floor.

The Jay’s are some of the most exciting players in basketball on the court, but they must play a large role this year off the court. The Celtics obviously have a lot of young players this year and they could probably learn from Tatum and Brown who were in similar situations that they are in now. They need to be vocal this year and demonstrate leadership to the young guys.

It will be exciting to see how the Jay’s will continue to improve in their young careers. Luckily the Celtics have their first pre-season matchup against the 76ers tonight, so we will get a glimpse of how the team is coming together. For now, enjoy this quick highlight video of the Jay’s:

The Celtics have one of the deadliest duos signed long term pic.twitter.com/DS55yg1hXU