Gordon Hayward explains why he left Boston for Charlotte 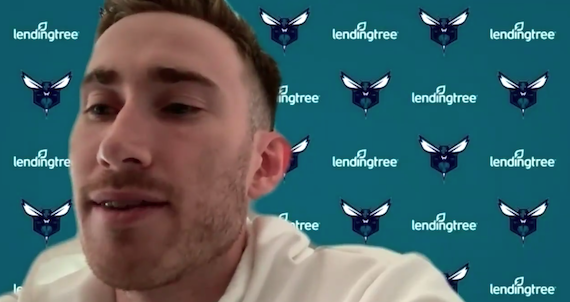 "Any time you talk to Michael Jordan, there's a little bit of that starstruck..."@gordonhayward on his conversations with MJ and why he chose to be a Charlotte Hornet. pic.twitter.com/lpjzkrk206

Now that Gordon Hayward has inked his new contract and is a member of the Charlotte Hornets he reflected on why he made the decision to leave the team he signed with in free agency in 2017 for the one he signed an offer sheet with a few years prior.


The forward explained his decision to join the Hornets, which included speaking with Michael Jordan both now and back in 2014 when he was a restricted free agent.
The more and more conversations that we had, that I had with the coaching staff, with some of the front office guys of just the vision that they had, the impact that they believe I can have of helping us get to that next level, like I said, it’s very powerful."
"It was a tough decision to leave Boston,” he said. “But it was something here (in Charlotte) where I wanted to maximize my potential and help the team win."
Hayward added: "I was in a different role after the injury and I tried to make the best of it. I firmly believe that I'm in the prime of my career."


I think people forget just how good Gordon Hayward was when Boston signed him in 2017. He was the #1 guy on a good Jazz team. If he had known how good draft pick Donovan Mitchell would have become I'm thinking maybe he would have stayed in Utah. But he was sold on reuniting with Brad Stevens and teaming up with Isaiah Thomas in Boston along with the unselfish Al Horford, and a cast of young players. That Celtics team had just been to the Eastern Conference Finals.
But before he could have his press conference Thomas was traded for Kyrie Irving. And if you watched that press conference you could see that Kyrie was really the Batman there and Hayward the Robin. But whatever Hayward could be the second option to Kyrie. No biggie. Then the horrific leg injury and by the time Hayward was back on the floor others had emerged in the pecking order. There were also grumblings from that toxic 2018-2019 Celtics team that Hayward shouldn't be getting minutes while he works his way back from some of the players. So the second season wasn't all that enjoyable either.
Finally by his third season, Hayward looked to be pretty frickin' close to his old self. Hayward sacrificed for the the team this past season taking a lesser role. You don't get to the level of the NBA without having extreme confidence in your skills. I have no doubt that Hayward believes he's in his prime and with a bigger role in Charlotte his game will soar. And it's not like he received nothing, but love from Celtics fans, so no one can blame him for going to the place he wanted to be six years ago.
Here's what I wrote when I first heard the news Hayward was headed to Charlotte, so instead of just typing it again here you go:

Best of luck to you in CHA @gordonhayward Thank you for giving BOS a shot 3 yrs ago. While it was disappointing to see many vocal fans who cheered your arrival, turn on you after your horrific injury, know that most C's fans appreciated your sacrifices and always supported you pic.twitter.com/bybQ6HHIQx