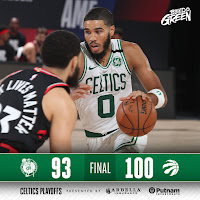 The Celtics couldn't hit water from a boat while shooting from behind the arc, while the Raptors were on fire from deep. Boston still somehow hung in the game and were tied at the half and were always one run away in the 4th quarter, but that never happened. Celtics will now have to bounce back in Game 5 on Labor Day Monday.

To think this series was a half a second from essentiually being all wrapped up and now it's anyone's series. Some might even say the Raptors are the favorites now. But anyone that things the Celtics are toast are severly overreacting. Take 4 games to win and to lose a series. Nothing has been decided. 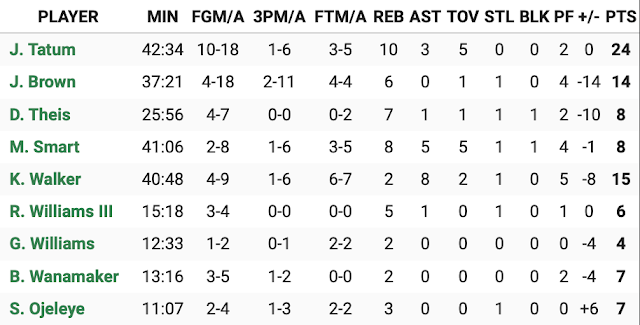 Jaylen Brown: "I'm a good shooter. I just got to make them."

Jaylen Brown: "We got to be ready to fight for our lives next game."

"I don't feel it was a hangover. I think they were ready to play, maybe anxious to play. We've got a lot of competitive, tough guys. We'll play better." - #Celtics Brad Stevens when asked about the fallout from tough Game 3 loss.

"It's easy to look at the stats and the numbers. We've been better in the fourth. To be down 5 or 6 with 48 seconds with the way we played ... there are some positives but we have to play better." - #Celtics Brad Stevens when asked about the team's struggles in the 3Q.

Kemba Walker: “I’ve gotta find a way to bring my teammates to a higher intensity. And I will. ... I can’t stress it enough how we just have to be better.”