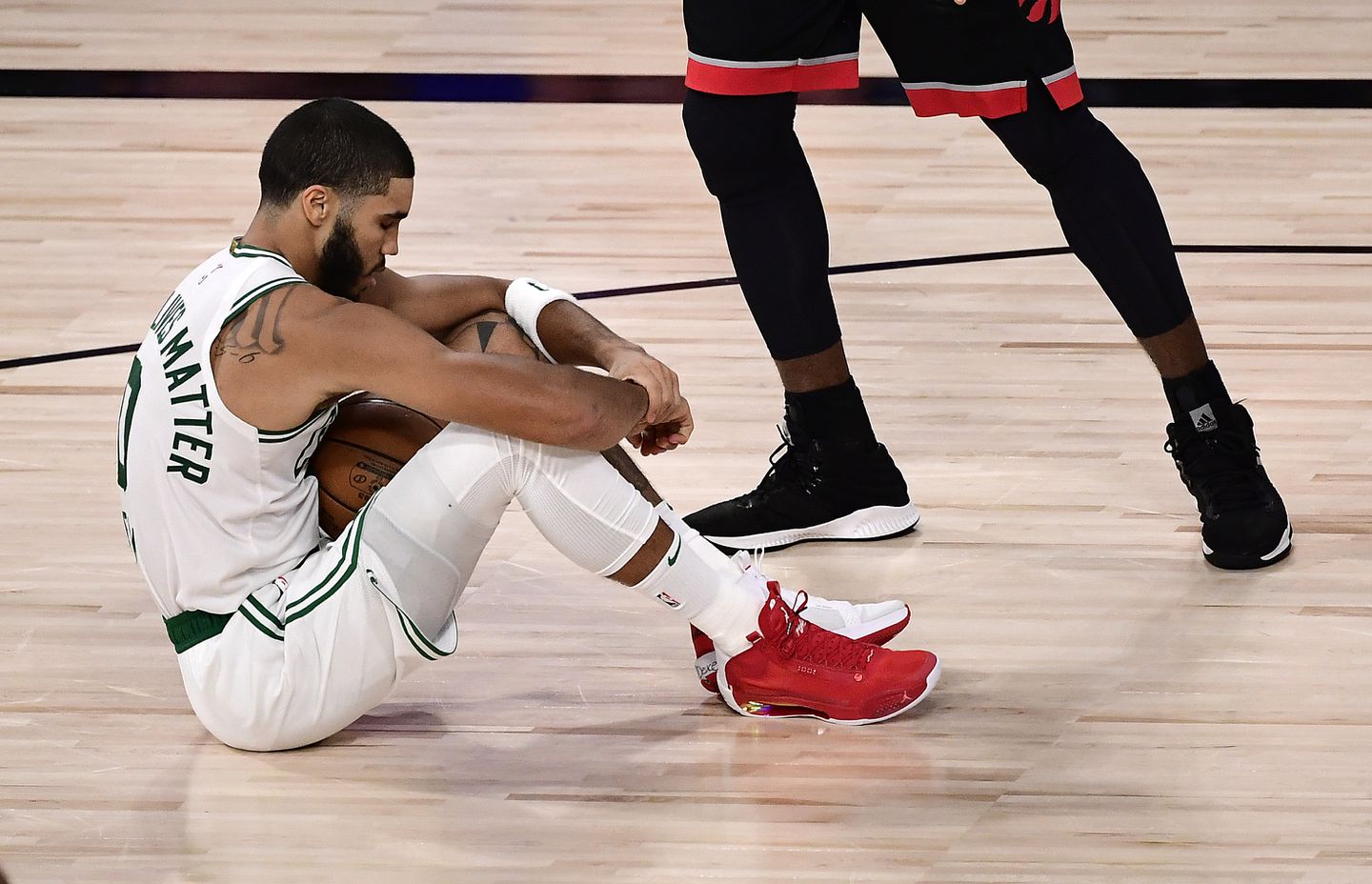 After being up 2-0 in the series the Boston Celtics have lost any and all momentum as the Raptors follow up their miracle win with another victory, the final score being 100-93. The game had 4 lead changes and 8 ties, but it felt like Toronto was in control the entire time. The Celtics could never get a good run going and their offense never showed up, thanks in part to both intense Raptors defense and several untimely, and often unforced turnovers.

Tatum was tied for the second highest +/- at 0 (a great indicator of how bad the team was tonight) and finished the game with 24 points, 10 rebounds, 3 assists, and 5 turnovers. He was the highest scorer for the Celtics, and you would think he had a great game looking at his FG% of 55.6, but then you would probably see that he shot 1-6 from three at 16.7%. He only had 2 made shots outside of the paint, and even missed 2 big free throws at the end of the 3rd quarter, ending the game 3-5 from the line. Tatum’s points were still incredibly important in giving the Celtics a chance in this game, and when his shot wasn’t going, he tried to be aggressive and get to the rim. 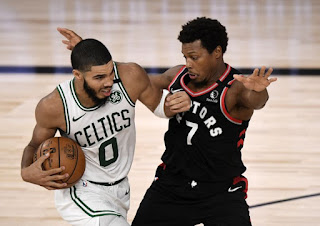 He made more than a few mistakes, especially in the clutch. In a 5-point game with about 50 seconds left he turned the ball over on a charge, shoving Lowry away to create space. Toronto hounded him whenever he had the ball, leading to 5 turnovers on bad passes and mishandles. On the other end of the court he had the second highest defensive rating of the Celtics, only behind Semi Ojeleye.

Jayson’s gets a B- because he was the highest scorer, best rebounder, and he played decent defense, but his turnovers, missed free throws, and terrible 3-point shooting bring him down. 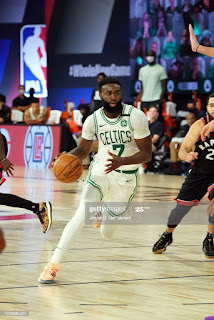 Jaylen really struggled this game. You would think that he would bounce back strong after taking responsibility for letting OG get the game winner off on Thursday night, but it felt like quite the opposite. He shot 4-18 (22.2%) from the field and 2-11 (18.2%) from 3. Sadly enough, his 18.2% was the highest 3PT% of the Celtics starters. The worst part about it is that they were all good, open shots that he usually makes. Luckily the two that he made were in the 4th quarter, hopefully meaning that he has some confidence (and ability) going into the next game.

Jaylen’s defense was also lacking today, and he wasn’t able to affect Pascal Siakam nearly as much as he did in their previous matchups. Part of this was due to his 4 fouls, but he didn’t seem as engaged in this game, and Pascal also just looked better. Jaylen had the 2nd worst defensive rating on the team.

He finished with 14 points and 6 rebounds, his only redeeming qualities to keep him from getting an F. He played confidently and pushed the pace, but he couldn’t convert and hurt the team a lot more than he helped. I want to say I expect him to bounce back but I expected that this game. We’ll just have to wait and see.

Jaylen Brown: “We’ve gotta make the best of our situation, come out, and be ready to fight.”
— Boston Celtics (@celtics) September 6, 2020

It seems as though he’s been getting frustrated this series, often looking to the refs after no-calls or calls that go against him. He shot 7 free throws in the game, hitting on 6 of them. He also ended with 5 fouls himself. His defense was stellar in the previous games, but he was really exposed in the mismatches today, ending with the lowest defensive win-shares in tonight’s game.

He moved the ball well and drew fouls, but he wasn’t able to generate the level of offense that we need and expect from him, and he was more of a liability on defense tonight than I can remember seeing him at any other point as a Celtic. He can’t do much to help that other than bring energy, which he did, so really Kemba was just average today, getting him a C+. 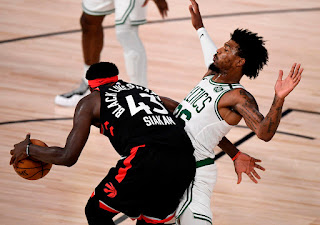 Smart’s turnovers and lack of offense really killed us. He had 8 points on 2-8 (25%) shooting and was the third starter to 1-6 (16.7%) from 3. He also left 2 points at the free throw line, shooting 3-5. He was one of the few people to bring energy today, although it honestly felt like less than his usual. To go along with his 8 points he had 8 rebounds, 5 assists, and 5 turnovers. It felt like one of those games where he was trying to lift the team but did just a bit too much and ended up taking us out of the game, getting him a C- rating.

Theis played some decent minutes in this game, netting 8 points, 7 rebounds, 1 assist, 1 turnover, 1 steal, and 1 block. He also surprisingly only had 2 fouls. His defense was decent throughout the game, and he scored fairly efficiently. He didn’t really do anything special, but he played his role and he didn’t have a bad game by any means. With that he gets a rating of a B. 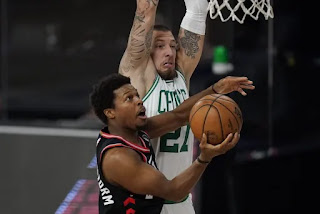 Rob was probably the brightest spot for today’s game. He finished with 6 points, 5 rebounds, and 1 assist. He shot an efficient 3-4 including a baseline jumper, and he brought some good energy. He was maybe half a second from having a big block on Siakam, but it was instead ruled a goaltend.

His biggest issue in this game is one that he’s been having pretty consistently; he lacks discipline on defense. He gets in good position but takes himself out of it by getting too eager. He just needs to be able to stay on his feet a little better and be quicker to run shooters like Ibaka off the 3-point line and he’ll get himself to an A or A+.

I know many Celtics fans won’t agree with this one, and with one quick look on twitter it looks like most other basketball fans would also disagree with me. Many people will want to put the blame on Brad for this, but there wasn’t too much he could change to get a better outcome. The team flat out just couldn’t shoot today. They shot an atrocious 7-35 (20%) from three-point range, and went 20-27 from the charity stripe, meaning 7 missed freebies in a game we lost by 7.

I will say that given Robert Williams’s play I would have expected him to get more playing time. Rob brought the energy that the team needed, and his offense was limited but efficient. His athleticism could have provided more of an impact in slowing down Serge Ibaka who gave Toronto a big boost, playing almost half of the center minutes with Gasol in foul trouble. 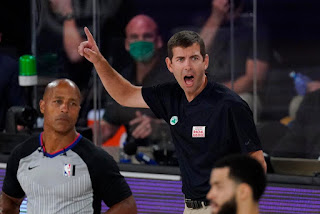 Brad also could have changed around the matchups since Jaylen was no longer able to contain Siakam today and Kyle Lowry was able to put up 22 points. The defense seemed like it was scrambling a lot and although Toronto doesn’t have much of a size advantage if any, they were able to play much bigger than the Celtics, and they got themselves favorable matchups time in and time out. This burden also falls on the players to help, but it didn’t seem like there were enough defensive adjustments to keep up with Toronto’s offense.

Again, there wasn’t too much Brad could control about this game, but he tried to instill a sense of urgency before the game and during halftime. His rotations maybe could have been tweaked to get some better offense running and to matchup better, but there wasn’t anything too obvious he could have changed. This was simply just a bad game for the team.

The Celtics really need to pull it together if they want to make a playoff run. After starting 6-0 they seem to have lost all confidence, and Toronto probably feels like they have all the power. Tatum and Kemba both said after the game that they did not match the energy level of the Raptors.

Jayson Tatum: “They played harder than we did. That was noticeable at both ends.”
— Chris Forsberg (@ChrisForsberg_) September 6, 2020

The team also had it’s worst 3-point shooting exhibition of the season. They left too many points at the free throw line. They gave away the ball much too often. They just flat out sucked – yet they only lost by 7. That should be an incredible motivator for them to get their acts together. If they don’t you could essentially chalk up this series. Next game is on Monday at 6:30 PM.