Heartbeaking finish. Everything was looking like it was going by script. Cardiac Kemba was in full effect and had a beautiful dish to Theis for what looked like the game winner. The Celtics even had Tacko Fall guarding the inbounds. But Lowry was able to fin OG Anunoby cross court in the far corner and despite Jaylen Brown leaping like 20 feet to close out the shot, the Raptors prevail by 1.
Kemba Walker finished with 29 points, while Jaylen Brown added 19 points to go along with his 12 rebounds. Tatum finished with 15, 9 and 6. The backcourt of Lowry and Van Fleet combined for 56 points, but it was OG who everyone will be talking about.

This was supposed to be the game winner for the C's:
Game 4 will be on Saturday. The Raptors were essentially being placed in their coffins and now they have a lot of life again all of a sudden.

Brad Stevens: “They’re a really good team that we’re playing against. ... I thought that both teams left it all out there in a great game. It hurts and it stings to lose, but we’ll just get back to it and get ready for Saturday.” 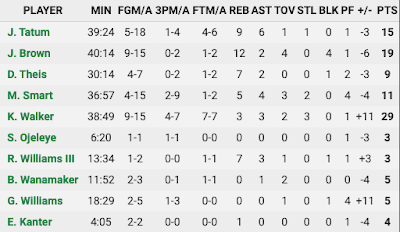 Jaylen Brown: "It's terrible. No excuse for it at all. It's ridiculous. Can't take your foot off the gas at all. We got to be ready to play Game 4."

I'm not sure I've heard Jaylen swear during his four years in Boston and he dropped three f-bombs in his press conference. Frustration level with that ending is high.