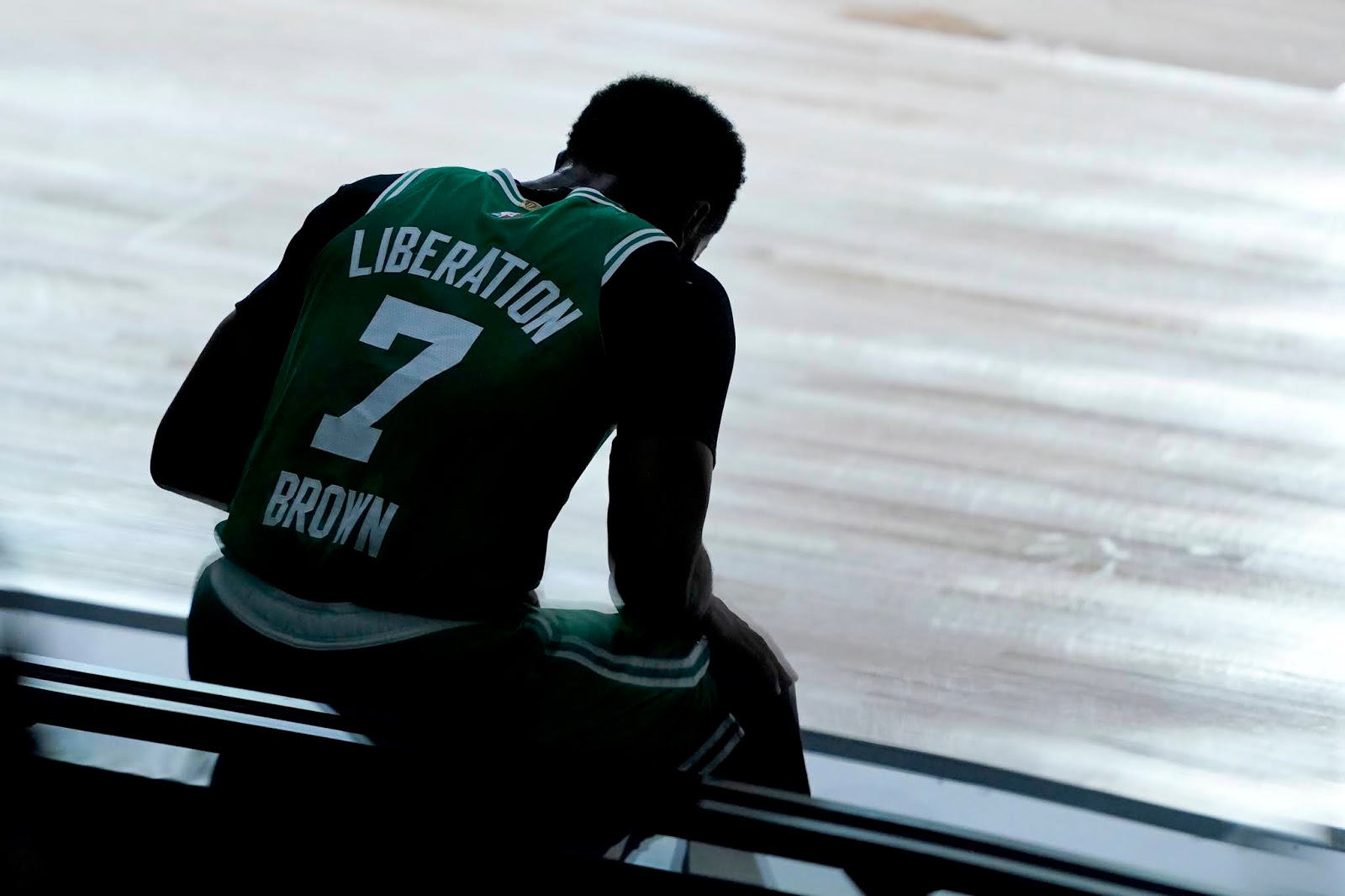 Just a few hours ago there was uncertainty as to whether the NBA would finish these already crazy 2020 playoffs. This came on the heels of yet another senseless and unnecessary killing of a black man by American “law enforcement” officers. Jacob Blake, a 29-year-old man was shot in the back at point blank range SEVEN times by Rusten Sheskey, a police officer in Kenosha, Wisconsin. This rightly sparked national outrage, coming just 3 months after the killing of George Floyd. One of the most prominent voices speaking up about the unjust treatment of black folks in America has been the Boston Celtics’ very own, Jaylen Brown.

Jaylen, just 23 years old, has been very outspoken about this civil rights issue, and has taken it far beyond the basketball court. After the killing of George Floyd, he drove 15 hours from Boston to Atlanta to stage a protest.


When the NBA was initially in talks to resume the season after being put on pause due to Covid-19 Jaylen wanted to use the opportunity to bring more awareness.

“At first those were my first thoughts. Just the role that sports plays in our society, that it could serve as a distraction,” Brown said. “But now, with the conversations that we’ve had, I think it’s going to enhance, rather than dim, the light that’s being spread right now. I think everybody wants to watch basketball and the NBA, and we have voices of influence in our communities and we have obligations to our communities, not just obligations to our organizations.” - MassLive

The NBA proposed the idea of allowing players to put a social justice message on the back of their jerseys in place of their names. Jaylen wanted to keep the back of his jersey blank to pay tribute to all victims of police brutality, including those whose names have not received the same attention as victims such as Breonna Taylor and Ahmaud Arbery. The NBA disallowed this, so instead he now has “Liberation” written on the back of his jersey.

Games resumed on July 30th, and Jaylen took time in nearly every press conference he was involved in to keep the conversation going.

“Racism is so deeply embedded in our country that people don’t even flinch or even shift at the idea.”

Jaylen Brown (@FCHWPO) opened his post-game press conference by once again demanding justice for Breonna Taylor. He then offered his perspective on the term “police brutality,” which he suggested should be viewed as “domestic terrorism.” Listen up: pic.twitter.com/i6x3cWrlpo
— Taylor Snow (@taylorcsnow) August 10, 2020

Now getting back to the shooting of Jacob Blake, Brown has been at the forefront of recognizing the lack of change and has called upon the NBA to take action. On August 25th, just 2 days ahead of the Celtics’ scheduled game 1 against the Toronto Raptors Brown began contemplating leaving the bubble to go and protest.

He also did a press conference to give his full thoughts on the issue in which he mentioned that he now looks at his jersey number, 7, and thinks of a black man getting shot 7 times in front of his children.

Just yesterday the Milwaukee Bucks were meant to be playing the Orlando Magic at 4 PM, but instead chose to boycott the game, and neither team took the court. The teams who were scheduled to play later in the day, The Los Angeles Lakers, Portland Trail Blazers, Houston Rockets, and Oklahoma City Thunder, also chose to boycott their games. All three games along with today’s scheduled games have been postponed until further notice, although it is expected that they will be played this weekend.

The NBA makes it official - no playoff games today. Instead players will meet with the owners of the teams left in Orlando via Zoom. Hope is for games to resume tomorrow or Saturday. pic.twitter.com/8hAwobJ1jF
— Rachel Nichols (@Rachel__Nichols) August 27, 2020

With these days off the players and staff in the bubble assembled to discuss a plan of action. Some players came out saying that they were blindsided by the Bucks’ decision to boycott, although Jaylen came out in their support saying that they didn’t need to explain themselves.

Sources: As some in tonight's meeting wanted to hear Bucks' explanation for making an abrupt decision independent of rest of teams to boycott game, Boston's Jaylen Brown essentially said that the Bucks didn't need to explain themselves and he fully supported what they did today.
— Adrian Wojnarowski (@wojespn) August 27, 2020

He also challenged the players who were discussing ending the season and going home.

Marc Spears reporting on SportsCenter: Jaylen Brown challenged players who want to go home. If you leave, are you just leaving because you’re lonely? Or will you go out and be in the trenches and support protests? Don’t just talk about it — be about it. #NBABoycott #Celtics
— Pat Bradley (@PatBradley_) August 27, 2020

At just 23 years old Brown has said on several occasions that he does not have all the answers, yet he has continuously showed that he is one of the smartest players in this league. He has not let anything stop him in his efforts to resolve this civil rights issue. He is said to have been one of the most vocal players in the bubble, and he continues to make me incredibly proud to say that he is a member of the Boston Celtics.

I have no doubt in my mind that Jaylen is going to be the future of the NBA, both on and off the court. His game and his activism have made strides and he has truly become an inspiration.