Gordon Hayward is planning on returning to the Disney bubble "soon," but that doesn't mean he will be returning to the court "soon." So says Brad Stevens when updating Hayward's rehab status 2 weeks into it.

"Rehab seems to be going OK," Stevens said after Monday's practice. "He feels a little bit better. Still has a pretty significant amount of ... I don't think his gait is perfect yet. Once his gait feels right and becomes perfect, he's probably on a quicker course to coming back.

"I think he'll rejoin us in the bubble at some point soon, but he still will be some time away when he does do that." 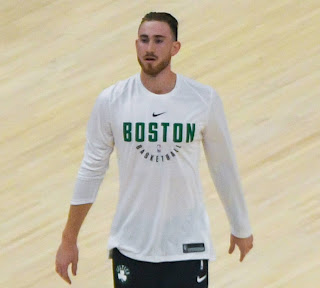 The original time table for Hayward's Grade 3 sprain was 4 weeks, but it's sounding like you shouldn't be shocked if two weeks from n ow Hayward is still not ready. Further muddying the waters is the impending birth of Hayward's fourth child which is due to occur in September.

So far the Celtics have been cruising without Hayward, but there will come a time this playoffs when he will definitely be needed. I mean the Celtics were cruising through the playoffs last season... until they all of a sudden weren't and lost four straight to get booted. Not trying to be be a "sky is falling" voice, but just saying that Hayward is a big part of this team and the more playoff games the Celtics get out of #20, the more likely we'll be seeing Banner 18 this year.