Pros and cons after impressive Game 1 against Toronto. 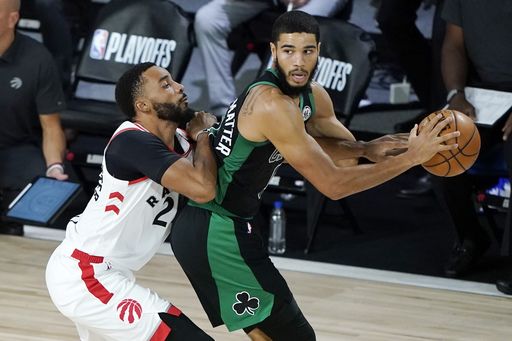 The first time ever matching up in the playoffs, the Celtics came out on top against the defending champions in an aggressive win. We all were saying that this was going to be a battle but it seemed like Toronto didn’t have their Wheaties at Disney World’s breakfast service.

Boston was up 39 to 23 at the beginning of the 2nd half. Despite keeping the Raptors behind an electrical fence in the first quarter, things got...sloppy, to say the least. Luckily, the turnover spillage was kept under control until the very end due to performances from very familiar faces and also from our beloved underdog players.

Limiting turnovers, slinging assists and getting rebounds were the Celtics main focus points stepping into round 2 Sunday afternoon. With that being said, let’s take a look at where the Celtics are as they head into Game 2 on this Tuesday.

Handle the rock or else...

I'm not going to sugar coat it, we were atrocious in committing turnovers. The Celtics won against Toronto in most turnovers in Orlando with 22 to 14.The blame couldn't just be to one person, as Jayson Tatum, Marcus Smart and Daniel Theis all had 4 or more turnovers.

We are very fortunate to have not let the Raptors take advantage of this deficit as they are the 2nd best in scoring off turnovers. We have to clean up the handling, because I don’t think that the boys from Canada are going to let us by so easily next time.

During the regular season against the team from the 6, a statistic that had some weight in determining the winner was rebounding. Toronto, with names such as Gasol, Siakam, Anunoby and Ibaka, let us not go back on our words before Sunday when we were all a little worried about controlling the paint.

That all seemed to change after Game 1 as Daniel Theis was just completely ABOUT IT. When I mean “about it”, I mean a playoff career-high 15 rebounds, scoring 13 points, 1 assist, 1 steal, going 7-7 from the line and willing to throw hands with Serge Ibaka at one point. Okay, maybe it wasn’t anything dirty, as mentioned by Theis. However, I could see how Serge wanted all the smoke by those numbers.

The backup was as impressive, Robert Williams III, who was a questionable force due to his flat performances against Philadelphia, just hopped out of the portal ready to play this past Sunday.

The 22 year old out of Texas A&M, has shown his “TIME LORD” capabilities in freakish athleticism and out of this world timing with blocks and alley-oops briefly as expected.

However, Coach Brad Stevens giving the 19 minutes to Williams rather than Kanter, proved to be one of the deciding factors of the game.

He scored 10 points with 100% from the field. Also, getting 5 rebounds, 1 assist, 1 steal and sending two shots into another galaxy. His two-way effectiveness is important with the other players. With our versatility from our bigs, it is hard to put a finger on who is going to step up each game, which is a dangerous strength for Boston.

Keeping the whole Toronto team under our thumb is going to be challenging (however, not impossible). As long as we keep these three guys at bay in the next four games, I think we can feel more at ease with our sights on the Eastern Conference Finals. Game 1 showed that good ole’ Boston grit in our defense. Pascal Siakam averages 22.9 points per game.

Although, he was held to only 13 points, shooting 31.3% from the field and going 0-3 from beyond the arc. Fred Van Vleet averaged 39% from three in the regular season but was completely disrupted as he shot 18.8% from the field and 18.2% from 3PT range. Kyle Lowry returning from a left ankle sprain was kept at 1-5 from 3PT.

Toronto as a team shot a laughable 25% from three, if we keep their best players with their arms tied, we can most definitely have a shot crumbling their shooters as a whole. 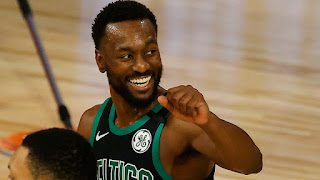 The assist factor was another element that would establish the victor in this series. The Celtics just barely made it past the Raptors in assists, creating 25-22.

Kemba Walker had career-high 10 assists, and I am so genuinely happy that this guy was able to escape Jordans death trap and is dishing it for us.

Marcus “Wicked” Smart went completely insane. I strongly believe, along with our bigs and our bench, that Marcus will be the x-factor in this series. If we continue to see him disrupt and manipulate the game like he has Sunday, it could be a very promising and extremely exciting series to watch!

"He's one of those guys where he comes in and changes the game with just his presence."
Marcus Smart discusses the importance of Robert Williams aka Time Lord

Our guys share what they think we did well during Game 1 and what it’s going to take to continue to be successful in this series. pic.twitter.com/vcYS1NwjnL

Daniel Theis on the mixup with Serge Ibaka: “That’s the second round of the playoffs. It was nothing dirty.”