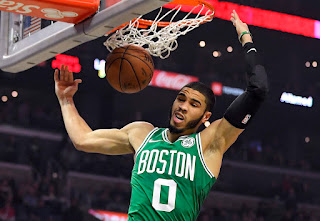 Stefan Bondy of the New York Daily News is reporting that Jayson Tatum is one player that is hesitant to resume the season due to potentially injuring himself prior to what should be a max extension this offseason.

For the NBA players, the risks and implications of joining the Orlando bubble have largely been identified and dissected. The most obvious involves the coronavirus, which is spiking in Florida and easily transmissible indoors. Everybody assumes that risk in the NBA bubble — the players, the coaches, the referees, the operational staff. Then there’s the threat of injury, which is especially significant to players on the verge of big contracts. According to a source, Boston Celtics’ forward Jayson Tatum, who is eligible for a max extension in the offseason, has expressed reluctance to play for that reason.


Keep in mind that Bondy only mentioned one source and it could just be a case of one advisor bringing up the injury risk. Reality is that NBA players have had access to team facilities for a while now and games aren't scheduled to begin for another month and a half. I know talking heads will love to blame any injuries on the hiatus, but I'm not buying it. Tatum after a couple of months of getting back into shape shouldn't be an injury risk.

This is a similar case to when people were advising Zion Williamson to shut down his college career and not play in the NCAA tournament. The differences are that Zion had suffered a couple of knee injuries prior and he wasn't getting paid to play college ball. Tatum is under contract to play NBA basketball. All star caliber players with contract negotiations coming up in the offseason always could have their financial futures derailed by an injury.

There are always risks. In the same vein, owners have their own risks. They could sign a player to a max contract and he could then suffer a gruesome injury his first game in uniform. See Gordon Hayward.

My guess is Tatum is excited to resume the season and bid for a championship. Sure there is concern about injury, but that would have been the case with or without the hiatus. I would be shocked if Tatum decides not to return due to this report injury risk. The much more likely route is for Tatum to acquire some more financial insurance as he's reportedly been pursuing.