The Anecdotal NBA: Stuffin’ the Stat Sheet in Quadruple Time 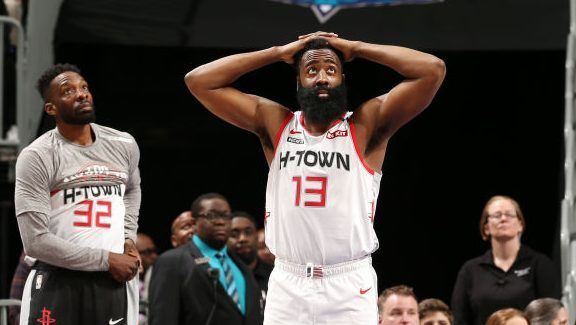 In the middle of Q4 during a game in Charlotte his under-sized squad would go on to lose last weekend, Houston’s James Harden committed a Turnover on back-to-back possessions, his 9th and 10th miscues of the matchup. By that point, the quirky Rocket superstar had posted 26 points, 13 rebounds and 10 assists – the Beard’s final stat-line read 30-14-10-10.

Basketball-reference.com identifies this as Harden’s third such “accomplishment” and only the 15th occasion of such a “Quad-dubious Double” since NBA record-keeping has allowed for such analysis. Only seven other players have ever produced a comparable game: Russell Westbrook (five times), Magic Johnson (twice), Blake Griffin, LeBron James, Jason Kidd, Charles Barkley and Clyde Drexler.

A genuine Quadruple Double (i.e. 10+ in four positive categories) is a rarer occurrence achieved by fewer than a handful of NBA players ever … though in fairness let’s recognize that it’s inevitable that athletes like Russell, Chamberlain, even a guy like Bob Petit eclipsed this standard on occasion.

Amusingly, the man credited with the NBA’s very first acknowledged Quadruple Double was not even aware of the magnitude of his stat-line until the following day – the wire service recaps of his team’s overtime victory against Atlanta didn’t even mention his name, instead choosing to feature the 20-point bench contribution of a rookie (and future Boston Celtic) named Bobby Wilson.

On the evening of October 18, 1974 this seven-time All-star, who would be enshrined in Springfield a decade later, was an 11-year veteran of more than 800 pro games who’d celebrated his 33rd birthday the previous summer … he was also playing his first NBA game NOT as a member of the San Francisco/Golden State Warriors.

This NBA legend from Canton, Ohio – and you thought LBJ was the first, huh? –had been acquired at the start of training camp by a team that viewed his aging talents as the final piece in a championship puzzle, a team that had fallen to Kareem Abdul-Jabbar’s Bucks in the West Final. The cost for this talent was a young postman (future C’s assistant coach Clifford Ray) and their First Round choice in the 1975 NBA Draft (ironically, a 20-year-old Joe “Jellybean” Bryant was selected then sent home to Philly in a straight cash deal).

The NBA of the 1970’s had its share of challenges – a rival league, the onset of free agency and player mobility, a reputation for a variety of socially unacceptable excesses amongst its players.

But those 10 seasons delivered the most competitive play in the league’s 7+ decades of existence, providing eight different franchises the chance to taste championship champagne – three of them (the Bucks, Blazers and Sonics) representing the Association’s rapid expansion of the latter ‘60’s.

The Chicago Bulls were born in 1966 and had evolved by ’74 into a scrappy contender built around smooth forwards Bob Love and Chet Walker and the league’s most rugged pair of guards in Norm Van Lier and Jerry Sloan (the only backcourt teammates ever to be named First-team All-Defense, if I’m not misinformed). Coach Dick Motta’s squad had strung together four consecutive 50-win seasons, but they’d been swept from the WCF as KAJ averaged 35 and 20 against the likes of Ray, Dennis Awtrey (yet another future Celtic) and Tom Boerwinkle. 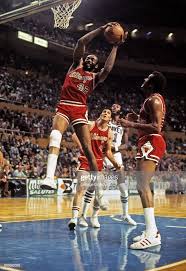 Enter Nate Thurmond – and what a grand entrance it was, albeit with a depleted team initially.

You see, Nate’s transitional training camp occurred without the presence of Love, Walker and Van Lier, all involved in contract disputes and “holding out” (as they used to say) … only Walker had returned by opening night.

But for that initial game of the season against the Hawks, Chet the (Original) Jet and Big Nate were joined in the Bulls’ starting lineup by a trio that would go on to rack up over half a century’s worth of NBA head coaching experience – Sloan (26 seasons), Rick Adelman (23 seasons) and Matt Goukas (7 seasons). That on-court savvy was evidenced by Chicago’s 36 assists on 50 successful FG’s that led to 63 percent shooting from the field in a 120-115 victory.

The Bulls’ regulars eventually rejoined the team, and though their win total slipped to 47, they again earned their way to the WCF, where they found their old pal Ray, Rick Barry and the eventual titlists from the Bay Area.

The underdog Bulls stole Game 5 on the West Coast but couldn’t close out the series at home two nights later – and Mr. Barry took over Q4 of G7 to propel his squad to the Finals.

While Big Nate kicked in nine points and a team-best 13 rebounds off the bench to the Game 5 upset, his playoff numbers were paltry, his FG shooting (3-for-19) even worse.

While Nate’s boardwork remained stout, his overall production dwindled as the season wore on – he scored in double figures just eight times in the final 40 regular-season games and was replaced (on April Fool’s Day, no less) in the starting lineup by the slow but steady Boerwinkle.

About a month into the following season, Chicago traded Thurmond to Bill Fitch’s Cleveland Cavaliers (for, among others, future Celtic Eric Fernsten) where he’d back up young stud Jim Chones. When Chones broke his ankle in practice just prior to the 1976 ECF vs. Tommy Heinsohn’s champions-to-be, the wily veteran stepped up to play 35+ minutes per game and average a double-double in the Cavs’ 6-game setback.

Nate Thurmond hung on with Fitch & Co. for one more season – but the handwriting was on the wall with the Cavs’ mid-season acquisition of Elmore Smith from Milwaukee … for a couple more No. 1 picks, these were the Ted Stepien days, after all.

But that’s another “anecdote” for another day.

Here’s another account of that famous first Quadruple-Double – in Mr. Thurmond’s own words.