The Boston Celtics lost their third straight game for the first time all season 109-98 to the rival Philadelphia 76ers. Boston found a way to avoid another slow start, but couldn't put together a full game effort and gave away a 15-point lead. 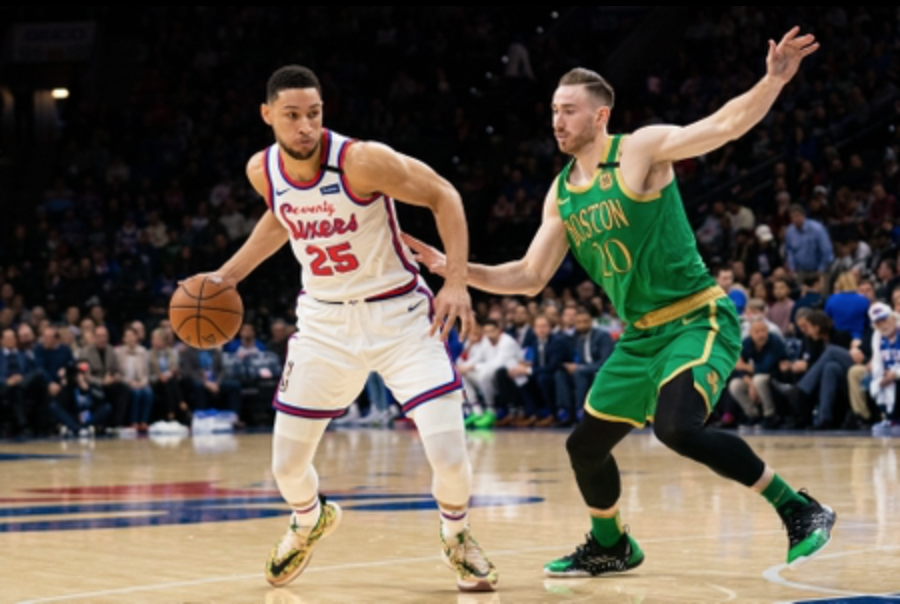 Thankfully, the Celtics opened the game much better than they have over the past three games. It would be difficult to play any worse, to be fair, but with Joel Embiid sidelined with a finger injury the Boston offense was humming. The C's shot 56 percent from the field and hit five of their first eight threes over the first nine minutes of the game. Considering they scored 14 more points tonight than they did in that same time frame last night against San Antonio, it was significant process.

Kemba Walker must have been real mad after his ejection against the Spurs, because he was taking out all of his frustrations on the 76ers. He scored 13 points on 5-7, including three threes, in his 10 first quarter minutes. He looked much better in his second game back from illness, and made sure to remind people of how dominant he can be on the offensive end.

The Celtics closed the first quarter on a 16-4 run and took a 35-26 lead into the second, a welcome site after having double digit deficits in the last three games. It's no small fact that a rejuvenated Walker can cure the slow starts that plague this team. Walker tends to lay back and let his teammates get going early, but if shots aren't falling, he knows when to turn it up, much like he did tonight, and put his stamp on the game.

After all the consternation about Boston’s slow starts, that was the second-highest scoring first quarter of the season for Boston (behind only 39 points at Spurs on 11/9)

Josh Richardson took on the scoring load in the absence of Embiid. The Tennessee product matched Walker's 13 first quarter points and knocked down all six of his free throws.

Philly opened the second quarter on a 4-0 to cut the lead to five, but Marcus Smart and Enes Kanter combined for seven points to push the lead back out to double digits. Smart, who has struggled mightily since returning from his eye infection, was a great boost off the Boston bench. He equalled Walker's 13 points on 5-8 shooting, along with his typical hustle play and defense. A lot of people get on Smart for his inconsistent shooting and questionable shot selection, but when you need a bucket, he is going to be one of the player to get you one.

Smart with a game-high 13 points in 10 minutes. Very good timing for C's to have him snap out of funk.

The 76ers are just a drastically different team with Embiid not playing. It's such a struggle for them to generate good shots in the half court and get quality offense going. They just don't have a dominant play they can throw the ball to to get an easy hoop.

That being said, the 76ers used a 4-plus minute scoring drought from the C's to go on a 12-0 run to cut the once 15-point lead down to just three late in the half. A second chance dunk from Daniel Theis and a fast break layup from Gordon Hayward pushed the lead back to seven heading into the halftime break. More importantly though, Walker appeared to injure a finger on his non-shooting hand right before the end of the quarter, and was taken out of the game during a timeout.

Kemba Walker no longer on the court after the timeout. He appeared to hurt his left hand before the timeout.

Outside of the Walker injury scare (it was made known during the half that he had a left thumb sprain and would be able to return), the first half was an encouraging sign for the C's. The offense looked good and they were active on defense, forcing Philadelphia into a number of difficult shots and coming away with five steals.

Something to note as well in the first half; Brad Stevens shortened his lineup. Only nine players played, and Brad Wannamaker was not one of them.

Philadelphia opened the second half on an 11-2 run to take a 2-point lead. The Boston offense got stagnant and reverted to a lot of isolation play, which gave the 76ers a chance to get out in transition, something they excel at with Embiid not on the floor. Stevens was forced to call a timeout just three minutes into the half to try and right the ship.

The run continued after the timeout and Philly extended their lead out to as many as six. But three straight threes from Walker (2) and Jayson Tatum (1) put the Celtics back in front. Tatum, who has been relatively quiet lately, was really stuffing the stat sheet this game. Through three quarters he had 13 points, nine rebounds, three assists, three steals, and a block.

With the Celtics down 77-74 with just over a minute to play, Smart came to the rescue again with back-to-back threes to put the team up by three heading into the fourth quarter.

Marcus Smart up to 19 points on 7-for-10 shooting. He just hit two big ones to put the Celtics back up three entering the fourth.

Both teams traded buckets and the lead to start the fourth. Richardson made a few tough jumpers, and the 76ers got a boost rookie reserve Norvel Pelle, who got some extended run without Embiid. Smart continued to make big shots though, as he splashed a straight away three with the Celtics down four.

With Ben Simmons on the bench in the fourth, the Celtics just couldn't get any separation from Philly. Richardson and Tobias Harris were too much for Boston to handle, and the 76ers pushed their lead back out to four with just over half the quarter to go. Tatum, Hayward and Jaylen Brown were struggling big time from the field, and outside of Smart Boston wasn't getting anything from their bench.

Tatum, Brown and Hayward are a combined 7-for-34 FG. #Celtics

Al Horford, starting at center in place of Embiid, converted an and-1 layup to put Philly up by seven, their largest lead of the game. But Boston quickly answered back when they need a big response. Walker knocked down an awkward jumper while getting fouled, and Hayward finished a reverse layup, forcing Philly coach Brett Brown to call a timeout.

Could be a critical swing there. Sixers fail to convert an alley-oop, Kemba comes right back with an and one.

After trading buckets for a few possessions, Philly pushed the lead back out to five with three minutes to go in the game. Simmons hit a baby hook shot to cap off a 9-0 run by the 76ers, and that was all she wrote. After a promising first half, the Celtics had nothing to show for it against and Embiid-less Philadelphia team.

Richardson led the 76ers with 29 points, Horford added 17 points, eight rebounds, and six assists, and Simmons chipped in 19 points. Walker paced the C's with 26 points, Tatum added a double-double with 15 points and 10 boards, and Smart had 24 points off of the bench.

The Celtics will be back in action on Saturday when they host the New Orleans Pelicans.