First off, just wanted an excuse to use the hip Twitter lingo of "flexes" and "claps." Now that that bucket list item is checked off, I can tell you that Twitter hall monitor Kevin Durant was back on Twitter (on his own account, not a burner this time) checking the scene to find the 1% of people criticizing him, as opposed to the 99% of fans and reporters telling him how great he was. He found an adversary in former Celtics center Kendrick Perkins when Perkins dared to suggest that Russell Westbrook was Mr. Thunder and not Durant.

What started off as a friendly debate between two media members, Perk and Celtics reporter Marc D'Amico quick turned into a "Twitter beef" between the two former Thunder teammates.


He put together the best career within that organization, but he’s definitely not the best player to have ever put on a jersey for them. Cmon Perk!
— Marc D'Amico (@Marc_DAmico) January 9, 2020 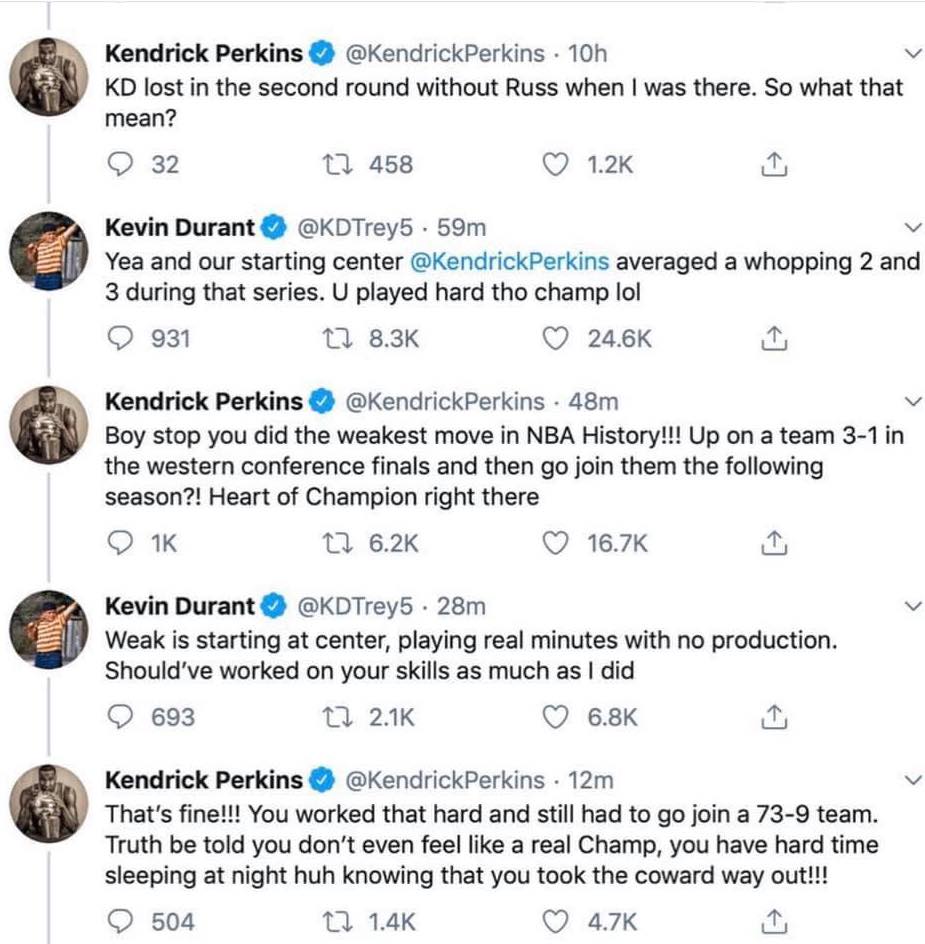 We've criticized Perk before when he says something wrong, but time to come to the big man's defense here. While Perkins wasn't the player he once was while with Oklahoma City, he wasn't just some scrub big man in his career. His role was to play defense and set picks, but he still averaged 7 points and 6 rebounds in the playoffs as the 23 year old center on the championship Celtics team. Then the following year with KG injured, he averaged 12 points, 12 rebounds, and 3 blocks in the 2009 playoffs.

With KG back for the 2009/2010 season, Perk went back to a more supporting role and while he only averaged 6 and 6 in the 2010 playoffs, let's be honest here, if Perk doesn't get injured in Game 6, the Celtics (and Perkins) have another championship under their belt.

Also, what's with Durant making weird comparisons? You're a star. Compare yourself to star players if you wish. What's next he criticizes Jackie MacMullan for never winning a ring? Perk played his role for the KG/Pierce era Celtics perfectly. He showed how good he was both when he stepped up in KG's absence and when the Celtics couldn't win in his own absence.