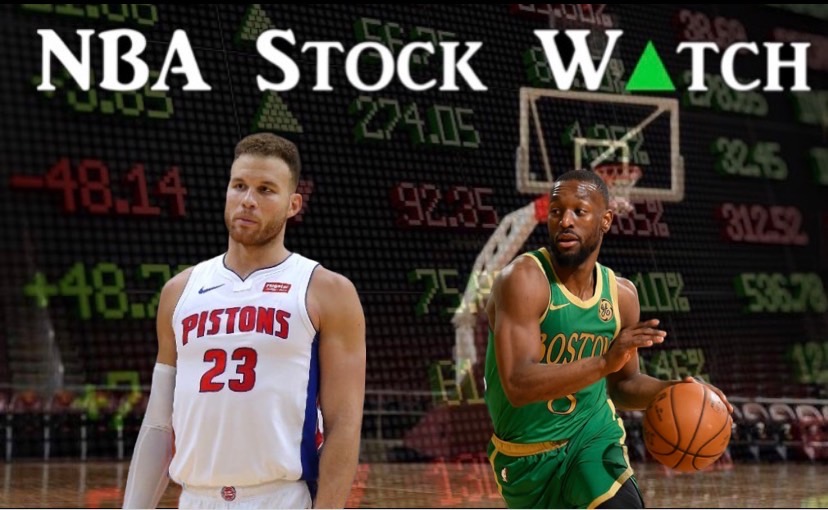 The NBA Stock Watch rolls into Week 8 with what might be my favorite segment so far this season. There were some amazing things happening in the league this week, including a star player nearly missing a game from an avocado "injury", two improbable comebacks, and an unknown center nearly averaging a triple-double. Enjoy!

The Celtics may have dropped their last two games, but this guy did everything in his power to prevent it. That included a season-high 44-point game, followed by a 29-point night.

On the week, Walker was the fourth-best scorer in the NBA after averaging 31.7 points. He did the most of his damage from the perimeter, netting 5.7 threes a night on 12.3 attempts. James Harden was the only player to average more three-pointers than Cardiac Kemba. In addition to the scoring, the Celtics guard assisted on 7.3 baskets per game while keeping his turnovers under two. His efficient shooting and playmaking weren't enough for Boston to get by the Pacers or Sixers, but Kemba finished with a team-best +11 plus/minus which was nearly twice as high as the next closest Celtic. Walker gets a steady stock upgrade after this play.

This one is a little tough. Any long-time readers of mine will know I've grown up a big Blake Griffin fan. However, I'm a fair grader of stock value, and perhaps no player took a bigger hit than Griffin this week.

The Pistons forward had a bit of bad luck this week, suffering an aggravated knee that took him out of his most recent game against the Rockets. In his time on the court before that, though, Griffin was incredibly ineffective for Detroit. The big man averaged 5.7 points, 3.0 rebounds, and 2.7 assists in 26 minutes per game this week. He shot what seems to be an impossibly low field goal percentage of 12.5% during this stretch, despite averaging 10.7 attempts per game. He converted on just one of his 16 tries from beyond the arc (6.3%), and his 1.7 cough-ups nearly matched his assist numbers. With numbers this poor, you got to wonder if the knee soreness has been lingering as of late before he was actually taken out of the game. Either way, Griffin's value takes a hit.

When the heck did Bam Adebayo get so good? The bouncy center has been quietly putting together a very nice season, but in the last week, he was nothing short of spectacular for the Miami Heat.

Adebayo damn near averaged a triple-double through his last three games. A TRIPLE-DOUBLE. I mean, the guy is a third-year center who the last time I checked was averaging less than three assists per game. The big man put up 20 points, 11.3 boards, and 8.7 assists (!) this week - some truly remarkable numbers. He finished 5th in assists per game as a nontraditional NBA center and had one of the best assist-to-turnover ratios in the league. The fact that his 20 points on 61% shooting and his 11.3 rebounds take a back seat here is just speaking to how great his facilitating has been. This recent three-game performance has me wanting all the Adebayo shares I can get my hands on.

As I am writing this, the Kings are a playoff team in the bloodbath that is the Western Conference. Hey, they may be 12-14, but they'd still be in. And based on their last week, they very well could stay competing for that spot in the spring.

The Kings went 3-1 on the week, with their biggest win coming right off the bat. Last Monday, they traveled to Houston to take on the red-hot James Harden and Rockets. Buddy Hield helped his squad get it done down the stretch and shock the Rockets 119-118. Sacramento's offense was one of the best of the week, as they averaged the fourth most three-pointers while also shooting them at the second-best rate. Overall, their field goal percentage was also top-three in the league. Look for the Kings to keep relying on their high-scoring offense to win ball games.

Man, every time it looks like the Timberwolves might finally be legit, they prove us wrong. Minnesota was recently two games over .500 with a 10-8 record. Since then, they've dropped seven in a row and find themselves sitting at the 10th spot out West.

Even with Karl-Anthony Towns going off, the TWolves just haven't been getting it done. They've been lacking the defensive discipline that they need to succeed, letting teams torch them from all over the floor. Minnesota finished the week with the league's worst defensive rating, allowing all three of their opponents to put up 120+ points - all of which resulted in losses. They fell to the Suns, Jazz, and Clippers and have yet to register a win in the month of December. Are the Wolves heading towards the basement of the Conference yet again, or can they turn it around?

Sure, it wasn't an amazing week in terms of win percentage for Chicago. But it was an incredibly impressive defensive showing for this young ball club, that also helped them upset a top team in the league.

In their 2-2 week, the Bulls actually played very well. They lost by just a single point to the Raptors on Monday and fell to the Hornets by 10 later in the week, which was their one clear weak game. In their two victories, though, Chicago played great. They erupted for a 34-point win over the Hawks and pulled off a major upset over the LA Clippers in which they held Paul George and company to 106 points. On the week, the Bulls boasted the best defense in the NBA. I can't believe I just said that!

Millennials and their damn avocados these days! The trendy fruit has taken over hipster cafes and lunch spots, becoming the stereotypical young person craze as of late. These kids are so obsessed with their avocados that they'll even risk an allergic reaction to consume it:


You typically see notifications like "Rose (right shoulder)" or "Griffin (knee soreness) is questionable for the game" when players are injured. But "Drummond (avocados)..." was a real-life injury update we got on our phones. What a world we live in!

Big stock upgrade to DNA this week. On Saturday night, Bronny James showed the world that he's "next up" when he had a clutch steal and lay-in for his high-school team in front of his dad. Not to mention that his opponent was LeBron's high school! The apple really doesn't fall far from the tree:


Bronny won MVP of the game, too. This high school freshman is already made for the spotlight!

There have now been two recent occasions in which players have yelled "it's over" after hitting big shots, only to end up losing the game. In this classroom lesson of humble basketball, I will give you two examples why mocking opponents before the game is over is a bad idea.

Exhibit A: Russ Westbrook yells "it's over" after hitting a layup, only to watch the Kings hit a game-winner seconds later:


Russell Westbrook after hitting what he thought was the go-ahead game-winning layup: “game over. GAME OVER.” pic.twitter.com/ImSOniBUV0
— Rob Perez (@WorldWideWob) December 10, 2019


Exhibit B: The very next night, Trae Young informed the Heat that "it was over" after his squad went up by six with a minute left. The Heat promptly went on a 22-point run to end the game:


Here is Trae Young putting the #Hawks up 6 with the assist and saying “IT’S OVER” to the crowd with 59 seconds left.


What's the takeaway lesson from this, kids? It's never over until it's over. Don't be a fool!


How Westbrook and Young left the stadium after saying “it’s over” and losing pic.twitter.com/QsloR0rUHu
— NBA Memes (@nbamemesinsta) December 11, 2019

Photo via @Celtics and @ForbesSports