While there’s no doubt that the NBA has long been a star-driven league and the franchise that can accumulate the biggest and most elaborate “toy chest” of talent seems to come out on top, there remains a place in the game for strategizing.

Coach Brad Stevens made an interesting choice during the close-out to Thursday’s slugfest with archrival Philadelphia – one might wonder if his team’s playing its second game in as many nights factored into the decision.

On the heels of consecutive defensive stops and a Gordon Hayward jumper that had swiftly sliced a nine-point edge to two, Coach chose to play the “foul game” … rather than entrust the game to his defense? (It didn’t help the “look” when Ben Simmons went two-for-two, including what would prove to be the decisive point.)

Despite the aesthetically-unpleasing “look,” the scheme seemed to be panning out until a careless and costly turnover on an inbounds pass threw a monkey-wrench into the proceedings – costing the C’s a chance to tie the game with a three-ball.

Losing should never be allowed to feel acceptable …

… but my gut is telling me that this week’s two-game skid is more “stepping-stone” than “stumbling-block” – call me Pollyanna. 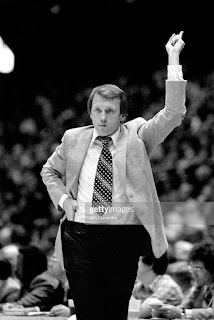 Unlike most hoop fans who view Celtics vs. Lakers as the be-all-and-end-all of rivalries, I believe that this long one-sided bi-coastal brouhaha pales in competitive substance as well as tradition when compared to the “basketball battles” of the Celtic and Sixer franchises.

On the afternoon of Sunday May 23, 1982, a Boston Garden crowd of which I was a part created a new way to spell R-E-S-P-E-C-T. As the inevitability of a Game 7 loss in the ECF set in, there arose a theretofore unfamiliar chant, at first faintly but soon filling the arena – Beat LA, Beat LA!

Quite fittingly, Dr. J pooh-poohed the whole thing, claiming the chanting at the end of Game 5 the prior Wednesday had been much louder … following Bird & Co’s Game 5 win that had reduced their deficit to three-games-to-two, the Garden Partyers had sent Philly to its locker room with a chorus of “See You Sunday!”

Here’s my historical look at the rivalry, including some tales that date back to the days of the Syracuse Nationals.