Update: Twitter continues to play role of the Grinch in ruining Christmas for Celtics Life 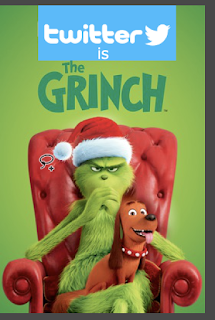 I'll stop there. Just wanted to update the Celtics Life Twitter issue because we haven't checked in to give you an update in a while and it was especially bothering me today as the last day before Christmas winded down. If you recall back on October 13th (71 days ago!) we wrote about how Twitter had without warning or reason suspended our Twitter account, which we've had for over ten years and had over 300,000 Celtics fans as followers. We asked for an explanation and got nothing but canned responses of a rule was violated. We asked for someone to actually take the time to write us and got nothing.

Will @twitter which apologized for accidentally suspending @celticslife, but then suspended them accidentally again a month ago un-suspend them by Christmas? @TwitterBoston

Finally eight days later we received another canned email apologizing for the suspension. They said they accidentally flagged our account as spam. Red Sox Life's account got the same suspension and same canned apology letter verbatim. Mark suggested that we try to get verified again, so we wouldn't have to go through this ordeal again. Unfortunately Twitter in a canned message says they are no longer taking applications for verification at this time.

And then it happened again on November 22nd. Both Celtics Life's and Red Sox Life's Twitter accounts were suspended without notice. Same canned email after we attempted to appeal the suspensions again. Same canned reason of Twitter rules violation. Replied to them with their own email where they apologized for accidentally suspending our accounts and got bak the canned "this email is not monitored,"reply.

Note this happened right before our Black Friday sales. Right before Small Business Saturday and Cyber Monday and has continued for a month all the way through the Christmas season. It's no surprise that our sales have been the far worst we've ever had during this holiday season. Al the apparel inventory purchased and stocked and almost all of it went unsold. Thanks a lot for the Bah Hum Bug Ebenezer Twitter (Yes Twitter deserves to be compared to The Grinch and Scrooge in one post. I'll try and sneak in at least one more).


So unless Twitter decides to actually read a support email with human eyes this looks like an issue that will continue. And our great writers don't get as many eyeballs as their posts deserve because Twitter doesn't give a shit about small businesses. They care about the hashtag and people paying to sponsor their tweets using that hashtag, but that's it.

How can you help?


You can email them... I don't know where. I've tried press@twitter.com You can Tweet at people who work there. You can DM someone who might actually have a real life contact there who I'm sure in two minutes could unsuspend our accounts and verify them.

Any other suggestions would be appreciated. Please feel free to comment with them below.
More people to possibly contact/Tweet;

@TwitterSupport Could you kindly undo the mistake of suspending the @celticslife account? Better yet, could you explain why they were suspended in the first place? Much appreciated.

@TwitterSupport can we get this resolved please? Why is @CelticsLife suspended? https://t.co/bdCtV6MVtn

I think @TwitterSupport should bring @CelticsLife back. They did nothing wrong and have only done good for the Celtics community, and more importantly, the Boston community.

I'm so sick of Twitter, and I'd encourage you to check the site directly for your Celtics news and rumors, but if you want to follow an account in the meantime there's @TeamBoston. Also please follow all the writer's accounts.