The Boston Celtics flexed their muscles with a 118-102 win over the Toronto Raptors on Christmas Day. The win snaps an 8-game losing streak in Toronto for the C's, and keeps them firmly in second place in the Eastern Conference. The Boston Big Four combined for 76 points, and Toronto's injuries were too much for them to overcome against one of the league's elite teams. 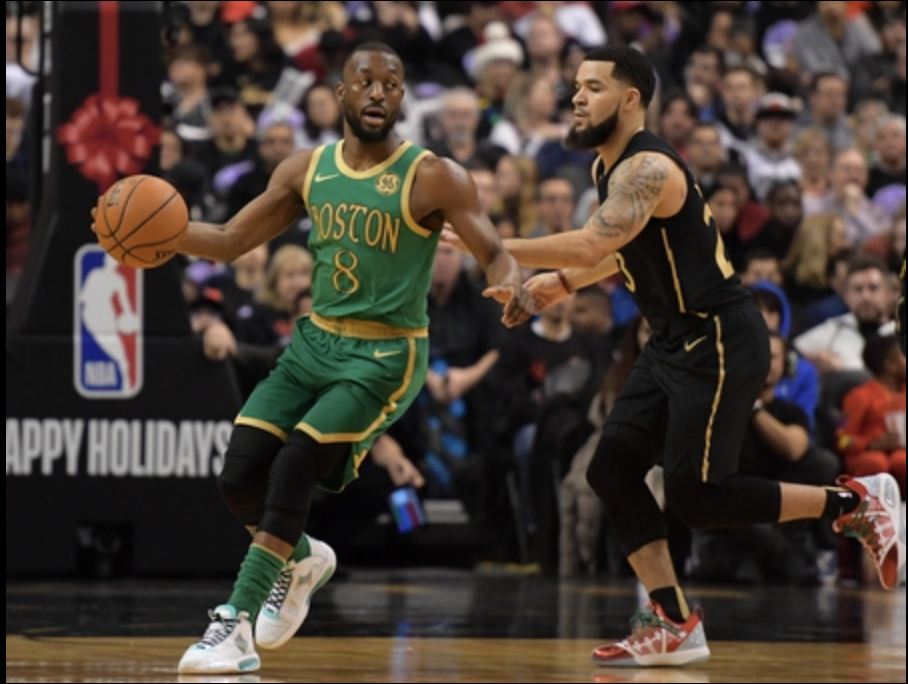 Before tip-off Boston fans got another Christmas present from the basketball gods:

The Celtics, who must have been a little sluggish after eating a large holiday meal this morning, came out a bit flat and the Raptors, who were hosting their first ever Christmas Day game, opened up a 10-0 lead. Kyle Lowry and Serge Ibaka combined for all 10 points, with Lowry knocking down two threes and Ibaka dominating the paint.

Powerful start for the Raptors, who have a 10-0 lead.
Cs are 0 for 5, Hayward's first shot was long, and Brad Stevens calls timeout.

After shaking off the rust and the early start, Boston answered back with a 9-0 run of their own to cut the lead to just one. It took a few possessions to get his legs back under him and his shot on track, but Gordon Hayward looked good in the early goings. He hit a couple of midrange jumpers and was contributing across the board, something that Celtics fans have become accustomed to when he is healthy.

Hayward already stuffing the box score in first quarter of his return. 4 points, 2 rebounds, 1 assist, 2 steals and a block in 8 minutes.

Jayson Tatum, who was coming off of a career-high 39 points against the Hornets on Sunday, was active early on the glass. He started just 1-7 from the field, but secured four offensive rebounds, to go along with two assists and a steal. one of the biggest reasons for the team's early success has been the ability to rebound from the wing position. Between Tatum and Jaylen Brown, the Celtics are able to play smaller but still compete on the boards.

After going down 10-0 to start the game, the Celtics finished the quarter on a 28-9 run to take a 28-19 lead into the second quarter. Boston was able to turn gain the momentum with a renewed defensive intensity, forcing Toronto into seven first quarter turnovers and just 41 percent shooting from the floor. Enes Kanter, playing in his first game outside of the United States since November of 2018, had a major impact off the bench as well. Kanter bullied the smaller Raptors' second unit for six points and three rebounds in five minutes of action.

The Toronto bench, who have been crucial in keeping the team afloat while the likes of Pascal Siakam and Marc Gasol have been out with injury, did their best to keep the Raptors in the game early in the second quarter. Chris Boucher and Rondae Hollis-Jefferson combined for 16 points on 6-9 shooting and gave the Raptors some much needed offense after going down by as many as 11.

While Toronto kept it close, with all of their injuries they just didn't have the talent to put together any kind of run once the Celtics were locked in on the defensive end. Tatum continued to struggle from the field in the first half, just 1-10 from the field, but Brown, Kanter, and Kemba Walker combined for 36 of the teams 55 first half points. Brad Stevens also tried some new things with his starting roster intact for the first time in weeks. He kept at least two of the Tatum/Brown/Walker/Hayward group on the court at all times, ensuring that there would be no shortage of offense that could come from having a lineup with primarily bench players.

The Celtics were on fire from beyond the arc to start the second half. Walker (2), Tatum (1), Brown (1), and Hayward (1) all hit threes in the first six minutes of the third quarter, accounting for 15 of the team's 18 points during that span. The Raptors had gone into a zone defense a few times in the first half to throw off the Boston offense, but with shooting like that from the three point line, a zone isn't going to do much.

With the hot shooting from long range and 16 points from Brown in the third, the Celtics were able to push their lead out to double digits for most of the quarter. The Boston lead ballooned to 19 points at the end of the third quarter, and the Toronto team, while feisty, just couldn't score enough with the depleted roster to keep the game interesting.

Brown, who has played exceptionally well after being the player most affected by the turmoil from the 2018-2019 season, put on an absolute clinic in the third quarter. Whether draining threes from downtown, breaking ankles and knocking down midrange shots, or drawing fouls, he could not be stopped. He has been playing at an All-Star level most of the season, but the third quarter on Christmas Day could have sealed the deal.

The Raptors looked like they were going to pull out some of their come-from-behind magic they have used to overcome giant deficits in recent weeks early in the fourth. They employed a little full court press, and scored the first five points of the quarter to cut the lead down to 14. But the Celtics snapped that notion real quick, as Tatum and Brad Wannamaker answered back with six straight points to push the lead back out to 20 with just under 10 minutes to play.

The Celtics kept the lead hovering around 20 points for the rest of the game, without extending their starters too much. Wannamaker did a nice job beating the full court pressure that Toronto was using for a few coast-to-coast layups, and Grant Williams did a nice job of challenging shots at the rim without fouling. Every Celtic that played real minutes had an impact today, which has become a staple for this team.

Romeo Langford is a +19 in 17 minutes. Three straight strong efforts from him.

Brown led all scorers with 30 points on 10-13 shooting, Walker added 22 points, Hayward chipped in 14 points, six assists and five rebounds in his return from injury, and Kanter added a double-double (12 points, 11 rebounds) off the bench. Fred VanVleet paced the Raptors with 27 points, and Boucher added 24 points off the bench.

The Celtics will be back in action on Friday, December 27, when they take on the Cleveland Cavaliers.