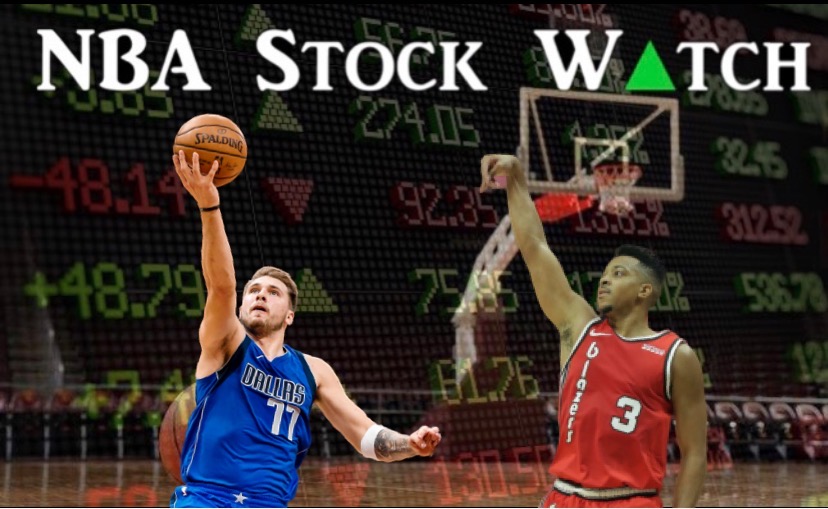 Can you believe it's been another week already? The season may still be young, but we are entering a time in the year when teams and players start to show their true colors that fans can expect for the rest of the way. Some squads have already fallen down to Earth after hot starts, while others seem to have only begun showcasing their potential. There's a lot to be excited - or disappointed - about, depending on your situation. Perhaps the NBA Stock Watch can help sort some of that out for you.

What can you say about Luca Doncic? The reigning Rookie of the Year had a phenomenal first season and is showing no signs of a sophomore slump so far. He capped off the end of last week with a wild 31pt/15ast/13reb against the Lakers on primetime TV and kept the momentum rolling through all of Week 3.

Through three games, Doncic averaged 29.7 points, 8.3 dimes, and 11.7 rebounds on 50.8% shooting from the field. He has been a precise conductor of the Mavs offense, dissecting defenses with ease and leading his team's league-best offense. We all knew the European sensation was a gifted passer and scorer, but Doncic has been displaying his rebounding skills as well. Doncic is steadily climbing the ladder of NBA superstardom, as this past week only further proved.

The second half of Portland's deadly backcourt has been ice cold from the floor as of late. McCollum has blossomed into a great versatile scorer for the Blazers in recent years but, at the moment, he couldn't hit water if he fell out of a boat.

The 28-year-old shot just 37% from the field through four games, while converting on four of his 20 three-point attempts. There wasn't a single player in the association who shot as many shots at such a poor percentage this week than McCollum, who is a career 45% shooter and 33% three-point shooter. Given his playing time and usage, his 16.8 points per game in Week 4 were very disappointing and did no favors in helping the Blazers in their tough slate of games (more on this later). I wouldn't expect McCollum's skid to last much longer, but the damage on his share price has already been done.

It doesn't matter if he fractured his hand - Hayward still deserves a spot here after an awesome pair of games this week for the Celtics. When you exclude the game that he left with an injury, the forward averaged 29.5 points, 7.0 assists, and 8.5 rebounds in two incredibly efficient contests.

It started on Tuesday when Hayward matched his career-high in points, registering 39 points on 85% shooting in the same building that he had his horrific leg injury two years ago. He converted on 17 of his 20 shots, and the only shots he missed were from behind the arc. As most readers will know, it was a beautiful thing to watch. Two days later, Gordo followed his performance with another gem in Charlotte, where he posted 20pts/6ast/10reb on 56% shooting and no turnovers. He finished the week with the best field goal percentage in the league (of players who shot at least 10 shots) and the 11th best plus/minus (+15.7).

It's unfortunate that Hayward will miss time after fracturing his hand, but let's celebrate the impressive week that the former All-Star put together.

As analysts around the league continue to ignore the Celtics in their list of title contenders, Boston has been on quite the run. After losing their season-opener, they have won seven-straight matches that now has them sitting alone at the top of the Eastern Conference standings.

This week in the office included wins over the Cavaliers, the Hornets, and the Spurs. The Celts won these games by a league-best average margin of 15.7 points, including a dominant 20-point victory on the road in San Antonio. Between Kemba Walker, Jayson Tatum, and Gordon Hayward, Boston has had three players averaging 20+ points and an offense that has multiple scoring threats on the floor at the same time. The green team is clicking on all cylinders - we'll see if they can keep the good times rolling in the coming weeks without Hayward.

An overtime victory on Sunday night was the only thing separating the Blazers from a winless, 0-4 week of basketball. Portland had high hopes coming into the 2019-20 campaign (and still do - they're only 4-6, after all) but so far have struggled to handle teams out of the gate, largely due to their defense. In their four match-ups since last Monday, the Blazers were 27th in the league in defensive rating and let up 115 points per game on average.

The week started in ugly fashion, as Portland saw rookie Eric Paschall and the rest of the Warrior's G-League team run all over them in a 127-118 loss. In my opinion, no one should be giving up that many points to the Warriors this season. The Blazers had two chances to bounce-back later in the week against the Clippers and Nets, but lost by six and four points, respectively. Even in their lone win, it took an overtime to sink the Hawks in front of their home Portland fans. The only trail that their stock price is currently blazing, is downward sloping.

The Celtics should be writing the Jazz a thankyou note after the favors that Utah did for them this week. Donovan Mitchell and company had matchups with the Sixers and Bucks and defeated them both by a combined five points. Their perfect 2-0 week put them right in the mix near the top of the Western Conference.

The Jazz are leaving plenty to be desired on offense, but are more than making up for it on the defensive end. Utah was fourth in defensive efficiency in Week 3 - despite playing two strong offenses - and are second on the season. Mitchell, Mike Conley, and Bojan Bogdanovic have made a great offensive trio, while the Stifel Tower is making his mark in the paint. Don't sleep on the Jazz this year.

Everyone knows how data-driven most teams in the NBA have become. Teams have been establishing analytic departments and hiring full-time employees dedicated to advanced stats. It really is changing the game.

Well, one Reddit user showed the true power of advanced analytics after James Harden had a terrible game in Miami. In a full-blown report, the Reddit user compared Harden's road performances with the rating of the strip clubs in those cities. Truly fascinating stuff:


A reddit user found a correlation between James Harden’s lack of performance on the road and the quality of strips clubs in that city.... pic.twitter.com/xWg0awhp6K
— Darren Rovell (@darrenrovell) November 7, 2019

So rebellious, I know. Last week, Eric Bledsoe decided to completely ignore a very basic NBA rule - the inbound pass. For whatever reason, he thought he could make up his own rule by dribbling the ball right inbounds:


Someone's got to drug test him after this one! C'mon, man.

Stock Up: The Masked Singer

For those of you who don't know The Masked Singer, it's a reality show where mystery celebrities perform in a singing competition. This season, there is some damning evidence that Victor Oladipo is the man behind the mask of the "Thingamajig" character. For starters, Oladipo is a pretty awesome R&B singer who dropped an album last year - not that many people know that about him. Not only does his voice match, but SB Nation's Whitney Medworth also compiled a list of basketball-related puns that prove that it is indeed the All-Star guard in the suit (we think):

You be the judge - check out one of his recent performances. Do you think this beautiful voice is coming from Indiana Pacer star Victor Oladipo?

Photo via @dallasmavs and @trailblazers