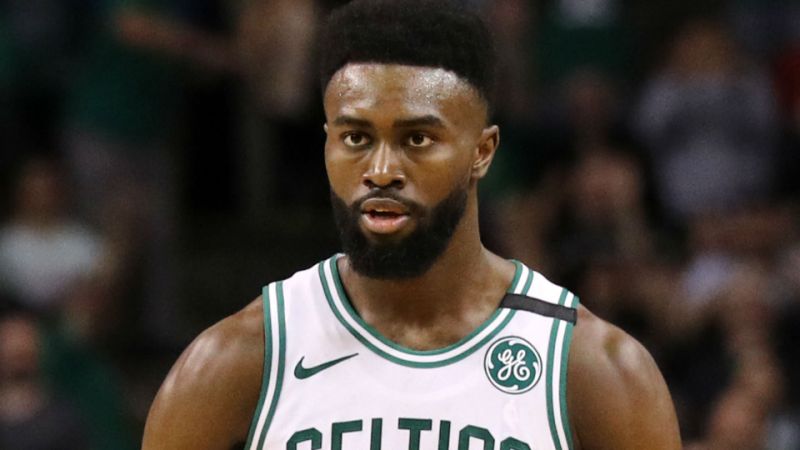 Draymond Green and Jaylen Brown are not currently on the same career path. Each player mans a different position on the basketball court and Green will be 29 years old until after the All-Star break, whereas Brown will be turning 23 at the beginning of the season. Draymond has also loaded up on hardware and accolades in his career, being a three-time champion and former Defensive Player of the Year, to name the most impressive. Jaylen has barely scratched his potential and has not yet established himself as a star in this league, so how does one player impact the other?

As reported by Adrian Wojnarowksi of ESPN, Draymond inked a 4-year, $100 million extension to start the 2020-2021 season. The All-Star has been the glue for the Golden State Warriors during their reign. On the surface, the deal feels better for Green than it does for the Warriors since there are questions of how he will age as a player with the deal ending during his age-33 season. But that is not why we’re here.

Jaylen Brown will be one of the best FAs in a weak class next summer if he doesn’t reach an extension. Celtics would have right to match any offer, but he could fit timeline/roster of a number of young teams out there with cap space. https://t.co/XtY93bQOns


All of a sudden, Jaylen Brown will be one of the better players available in free agency next offseason (assuming an extension isn’t signed first). Draymond’s extension comes on the heels of the Portland Trail Blazers announcing an extension with All-Star CJ McCollum, taking him off the 2020 free agency list as well. Jamal Murray and Ben Simmons both signed max extensions with their respective clubs. They will no longer be restricted free agents.


The star-power we saw during 2019 free agency will not be the same in the summer of 2020. Anthony Davis has a player option that he will opt out of with the Los Angeles Lakers, but all signs point to him signing a max deal in LA. A lot can change in one year, but let’s figure he is off the board. Other former All-Stars like Kyle Lowry and Marc Gasol will be unrestricted free agents, but they won’t be in the max-contract market.

There are also a handful of intriguing players that have player options next off season. The aforementioned Anthony Davis will be the cream of the crop, but Celtics fans don’t need to look far to realize Gordon Hayward has a decision on his $32 million option. You may see other players end up on the open market after declining their player options as well - DeMar DeRozan, Otto Porter, Andre Drummond and Nic Batum.

For some players, you can spot a breakout season a mile away. Others, like 2019 Most Improved Player Pascal Siakam, are a little tougher to see coming.


On one side, it makes sense for the Celtics to offer Jaylen an extension before the season starts. Maybe he’ll take something less than the max and take something like four years/$88 million. If Jaylen comes into the season and really pops and assumes his potential, then he will be looking at a bigger deal come next off season. The Celtics may be able to have him for less now, but is he interested in signing a lesser deal? And if he does break-out, are the Celtics really going to mind giving the player big money?

The other side to this is that a motivated Brown seeking a big payday could really benefit Brown and the Celtics. We’ve seen countless examples of players across all sports making a jump in contract years. If he ends up being a two-way player that knocks down the three-ball consistently, while being a menace on the fast break, and the Celtics have a successful year as Jaylen being a top-six player in the rotation, then the Celtics won’t mind breaking the bank and living in the luxury tax with Brown.

The risk is worth the reward right now for the Celtics. Since Jaylen will be a coveted restricted free agent because not only is he a good young player but because he may the best-of-the-rest, opposing teams will likely offer a big deal to make the Celtics think about matching the offer sheet. If Jaylen has a good year, then it won’t be as difficult a decision for the C’s. Alternatively, if he doesn’t make a leap, then the decision could be just as easy to let him go. The Celtics have their price for Jaylen right now, but that could certainly change after another year

What we know now, though, is that as names get taken off the board, the ball is in Jaylen’s court on how much money he earns next year. There will certainly be interest.