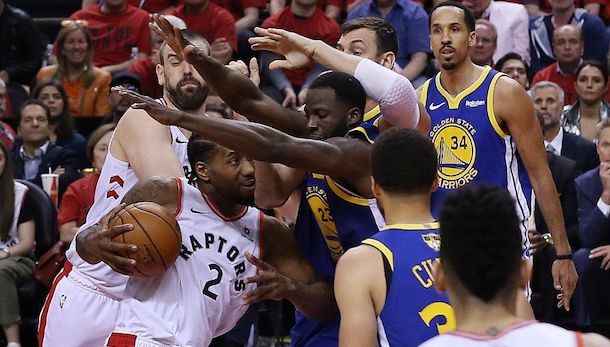 Imagine the Boston Celtics of the 80’s going head-to-head with Magic and the Lakers, Moses and the Rockets, or Dr. J and his 76ers without Kevin McHale suiting up as the Robin to Larry Bird’s Batman. Well, that’s essentially what we have in this year’s NBA Finals as Steph Curry leads his Warriors without the immense presence of Kevin Durant dropping buckets on the Raptors.

As many of you already know, Durant is out with a calf injury he suffered in Game 5 of the second round to the Houston Rockets. And because of his absence, some of the best online sportsbooks found all in one place, at Sportsbook Review, tagged the Warriors as 2 ½ point road underdogs in Game 2 after they dropped Game 1 by the score of 118-109. Golden State not only covered the number but won the game outright, 109-104, and had you read an Intertops review at SBR, you would have known that Intertops is not only chief among those best online sportsbooks but one that had some very enticing bonuses for new signups.

The Warriors are hoping Durant comes around sooner than later but the suspicion is that KD winces at the thought that his fellow All-Stars being able to win a championship without him on the floor. It parallels the Kyrie situation last season when the Celtics made a gallant run through the postseason without the injured superstar – and Gordon Hayward for that matter – and took Lebron’s Cavaliers to a seventh and deciding Game 7 in the Eastern Conference Finals before falling. We now know that Irving wasn’t all that choked up to see his mates bow to his former team which speaks volumes about his commitment to Boston, or anything else in his orbit but himself.

Warriors’ head coach Steve Kerr is insisting that all Durant needs is one practice to test his leg and the assumption is that KD would buckle up and say, “Put me in coach,” regardless. But the romanticized notion of Durant playing through pain, ala Willis Reed emerging from the tunnel in Game 7 of the 1970 NBA Finals with a torn thigh muscle to start the game for the Knicks against the Lakers in Madison Square Garden, might be a bit farfetched.

Steve Kerr stated, "It's feasible. But again, it's really a day to day thing. If we had a crystal ball, we would have known a long time ago what we were dealing with. It's just an injury -- there's been a lot of gray areas."

Perhaps part of that gray area is Durant’s willingness – or lack thereof - to play through pain or merely sit on the sidelines until he feels he’s ready for a Game 7 cameo. But let’s be fair, Durant is a professional and one of the best in the business, therefore, the supposition by some that his injury is mostly healed and he is just pulling a prima donna routine because any dismal performance could negatively impact his free agency appeal, is disingenuous. Durant has played through injuries before and the bet is he will do so again. But the fact remains that KD has not seamlessly integrated with the bevy of superstars in Golden State but rather remains more of a sharpshooting mercenary wearing the uniform of the highest bidder.

Wednesday night will see the series shift to the Oracle Arena where some of the best online sportsbooks, like Intertops, are dealing the Warriors as 5 ½ point home chalk. It’s highly doubtful Durant will be in uniform but the conventional wisdom is that he will eventually be back and making it rain, at some point in the series. But regardless of when that happens, it’s highly unlikely it will be a Willis Reed kind of moment for Golden State fans, because it’s an even money bet they will be rooting against him next season after he packs up and takes his talents to another team trying to buy an NBA championship.