The Boston Celtics may never see the likes of Kevin Garnett ever again - but I hope like hell that they do. And I hope they do it reasonably soon. He had size, skills, talent, determination and ferocity all in one package. But he was also unselfish and humble (in his own way). Take a few minutes to get former Celtic Kendrick Perkins' thoughts on The Big Ticket and the time the two big men spent together in Boston. 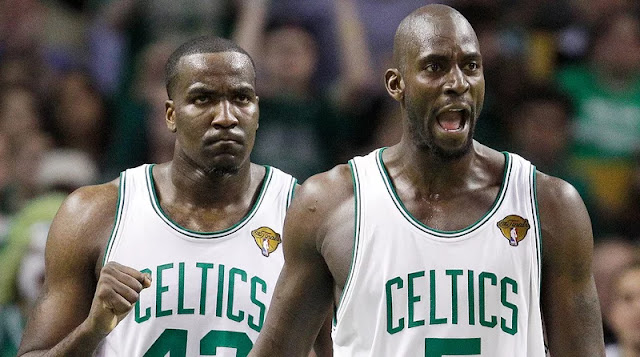 "Playing with Kevin Garnett aka 'The Big Ticket' was the best thing that ever happened to me in my life." @KendrickPerkins relives the magic of @KevinGarnett5KG's 2008 NBA Finals performance: pic.twitter.com/8XhQfBZNwF

For those that can't take the time to watch the Fox Sports tweet/video, I present some of Kendrick's quotes below:

He (Garnett) set the tone for everybody.

Not by talking, but his energy level.

He was easily the best player on our team at the time, but he came in and took a back seat.

He also let Doc (Rivers) call him out and was able to coach him.

So, your best player - if your coach is able to coach him - he can coach everybody else.

(Kevin told me) "It's not about you. It's not about any of us. What we're trying to accomplish is bigger than everybody in this gym.

Just as with Kyrie Irving, Danny Ainge could not be totally sure how Garnett would gel with Paul Pierce, Ray Allen, Kendrick Perkins or Rajon Rondo. Despite some heated confrontations among the players and coach, it worked out fine. Much of that is due to KG and the way he took "a back seat". And as Perkins stated, The Big Ticket "set the tone", and he did it by his actions - not his words. Practice? Regular season game? Playoff contest? Didn't matter. KG was going to be intense and competitive - right from tip-ff.

Kendrick's last quote is the most important. Can the Celtics find another big man that can score, rebound, defend and get his teammates going. And also have that intensity, humility and unselfishness that Garnett displayed?

Danny Ainge doesn't need a big man with a mediocre motor. He doesn't need a one-way, offensive force that prompts teammates to become spectators. And Ainge certainly doesn't need a star that lacks true humanity. My stance right now is that if Danny is unable to come up with the right player, he had best go ahead with his current crew - at least for now. No one is going to tell me that a fully-restored Gordon Hayward alongside Jayson Tatum, Jaylen Brown and the ever-effervescent Marcus Smart does not make for a solid core. Every Celtics player, coach and exec learned some lessons this past season. Time to put them into practice.