The season-ending injuries to the Warriors Kevin Durant and Klay Thompson are vivid reminders of how many NBA players are going down. These players are competing at such a high level of athleticism, and for such a long season, that the toll is obvious. I have only been writing for CelticsLife for two years, but I have spent more than a quarter-century as a Personal Trainer/Health Coach with a specialty in Sports Conditioning. I have learned much and continue to do so. Here are some thoughts. 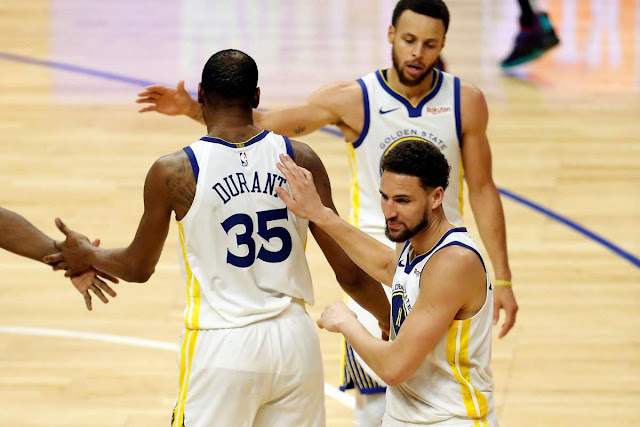 The reactions to the above tweet often suggested that there was no connection between Klay's hamstring injury and his torn ACL. Ditto for Kevin's calf injury and his ruptured Achilles tendon. Those suggestions were incorrect. Exercises for athletes often include toe-to-fingertip movements, and everything in between. Every muscle, tendon and ligament in the body is connected, directly or indirectly, to something else - to other soft tissues. All of these units work together to produce the desired athletic movement. Weaken one muscle, tendon or ligament, and it affects everything else.

Re-injury doesn't have to be to the same body part. If Thompson's hamstring was injured and weakened, he may have favored it - leaving the knee joint vulnerable. Or frankly, the other knee could have sustained the injury. Or the hip. That's the point. I have seen this repeatedly when clients have worked with me to overcome a specific injury. Very often, they complain about a new suspicious soreness in another area.

A high-level athlete's muscles contract powerfully - sometimes too much so. The case of Marcus Smart's iliac crest avulsion may be such a case. Many thought that the abdominal injury was caused by forceful contact with an opposing player, but it may have been a powerful contraction of his abdominal muscle that actually pulled a piece of bone off the iliac crest.

A close look at KD's injury at the time it happened may show the same - his calf muscle contracting quickly and powerfully - resulting in an Achilles tear.

Pay attention to how #KevinDurant right calf contracts violently. Beleive it or not, the strength of the gasteocnemius muscle contracting so quickly/forcefully is what tears the Achilles tendon. pic.twitter.com/odCSgdNiGF

So how do we stop the plague of injuries. Well, we don't, but it can be curtailed somewhat. Start with the season. A total of 82 regular season games, a possible 28 post-season contests - and then we have exhibitions and pre-season games. Recovery has its limits.

"The human body has a great, but limited, ability to adapt to any stress it receives." --- Serious Growth III, Leo Costa, et al

A shorter season may never happen. There is too much money to be lost - by players, teams, sponsors, etc. Keeping back-to-back games to a minimum is a good start. And allowing players more time to fully recover after injury would help. We saw how Gordon Hayward's ankle injury hampered him all of last season, even one-and-one-half years after it occurred. NBA players operate at a much higher athletic level than us common folks, but even they have their limits - and I believe those limits have been reached - and exceeded.