Austin Ainge attends Bol Bol impressive workout - who drafts him, and where?


I have been trying to find out if the Celtics Austin Ainge attended the Bol Bol workout a few days ago. Adam Himmelsbach supplied the answer in his tweet below. It looks like Austin was there to see Bol's athleticism, quickness, ball handling and shooting prowess. The son is definitely going to be better than his late dad, Manute - and Manute had a 10-year NBA career. 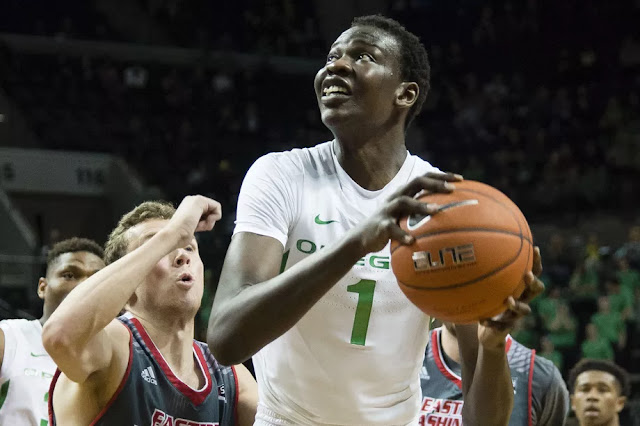 Manute was 7'7" tall and 201 pounds. His height and wingspan (8'6") made him a great shot blocker, but his other basketball skills were limited. In the video below, he quickly blocks four shots in a row.

General Managers in today's NBA fear height. What I mean is that major height often means major injuries - and Bol has a foot issue. But he is not one-dimensional. For guy his size (7'2"), he can move, cover guys on the perimeter, handle the ball - and shoot it as well. But did I mention the foot? Yes, that is scaring off suitors.

😳.... They say Bol Bol can’t play defense? WTH is this? Look at his footwork. People still can’t tell me why he was in Atlanta a few weeks ago. I bet Travis Schlenk knows why. 😋 pic.twitter.com/LBMrbjadI7

Recent mock drafts generally have Bol being taken in the early 20's in the first round. Some analysts feel he is worth a shot much sooner, maybe in the early teens. No one knows for sure where he will go in the draft. He is a wild card. But at #22, if he remains on the board, Danny Ainge needs to grab him. Could he be a bust? Sure! But add some strength and muscle mass to that tall frame, and Bol could become a rebounding, rim protecting, floor-stretching big - unless, of course, that foot issue erupts. We'll know more in five more days.