The Toronto Raptors as 2019 NBA Champions quickly brings to mind some regrets - or certainly a few What Ifs. The Golden State Warriors put up a valiant fight, but the severe injuries to Kevin Durant and Klay Thompson ended their streak. What if the Celtics had been more aggressive in acquiring Kawhi Leonard? What if the guys in green had played to the level initially expected of them - finished as the first or second seed in the East - and got to the Finals against a Warriors team that became plagued with injuries? 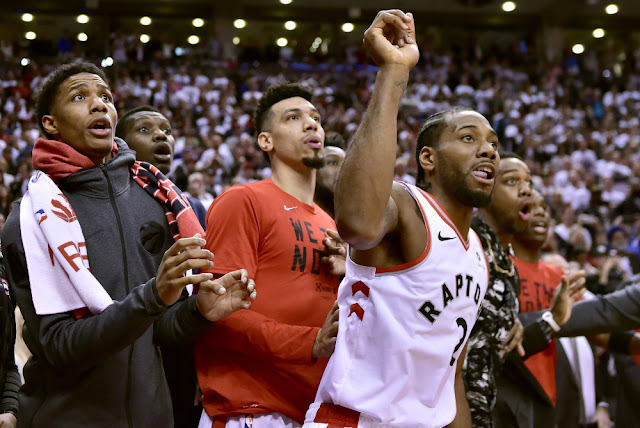 Of course, Danny Ainge was worried about Kawhi's long-term injury and the fact a trade may mean a one-year rental. And I certainly understand the reticence in trading either Jaylen Brown or Jayson Tatum. Here are some thoughts from ESPN's Zach Lowe:

In retrospect, Boston was both too cautious and too optimistic about its existing core. (I was, too, by the way. Speaking of thin margins: A lot of us got so wrapped up in Boston pushing Cleveland to seven that we breezed past the fact that a middling Milwaukee team had done the same to the Celtics two rounds earlier.)

If you have a chance to win the title and a healthy culture, believe in that culture enough to take a risk that meaningfully boosts those title chances -- even for just one season. Every chance is precious. Even teams that appear set up to contend for five or 10 years are delicate organisms. Lesson learned.

Lesson learned, indeed! With 30 teams constituting the League, winning one Championship every 10 years would be exceptional. Golden State won three Titles in four years. Remarkable. But age, extra-long seasons and bad luck took over this year. They were vulnerable, and the Raptors were in a position to prey on the injury-riddled Dubs. The Celtics were in no such position, but they could have been. Here is more from ESPN's Zach Lowe:

Toronto had the leverage to say no on both Anunoby and Siakam. That speaks to how little leverage San Antonio had -- or created -- in dealing Leonard. It really did take a perfect storm for the Raptors to acquire Leonard at this price.

They deserve credit for pouncing. Not every team would have traded a beloved homegrown All-Star for a superstar who signaled no interest in joining -- even if the cold analytical terms appeared a home run. Fewer still would have had the assets to dangle in deals for Ibaka, Leonard and Gasol.

The Raptors this season were everything I wanted (and envisioned) the Celtics to be. Everyone buying into their roles and stepping up when called for by the moment. The team in the East to be able to break the Warriors’ dynasty.

I totally agree with the above tweet. The Celtics often played like it was a pickup game on the asphalt - totally disjointed. The whole was much less than the assortment of individual parts. That should never happen again. They missed a great opportunity - and they know it.

I partially understand why Ainge did not pursue Leonard more aggressively. But I would bet that he honestly felt that adding The Klaw would not be sufficient to grab a Title. He may have felt that his present crew was good enough to do just that. And they were as a collection of talented individuals - but not as a team. And who knew that Kawhi would be so damn omnipotent?

It will now be at least a 12-year drought since the Celtics last Title. Danny has to be impatient. Things are already in the works to correct the ills and flaws of last season. Two of the biggest free agents out there, Kevin Durant and Klay Thompson, won't be playing next season due to injuries. Kawhi may move on from Toronto. Next season's Title is up for grabs. Gonna be an exciting off-season for Celtics fans. The opportunity for 2019-20 is there.