What’s next for Celtics?

Trader Danny will have plenty of work cut out for him after Traitor Kyrie departs for destinations unknown. It’s a disappointing end for someone many believed would be a seminal piece of a burgeoning Celtics’ dynasty. Irving’s regular season stats bore out that he was, indeed, a top 10 talent in the NBA but his greatness was singular and never transcended the way Larry Bird did a generation ago. It was an experiment that didn’t succeed but it was far from disastrous. Now the Celtics cerebral general manager, Danny Ainge, must recreate a new way to bring a championship back to Boston. 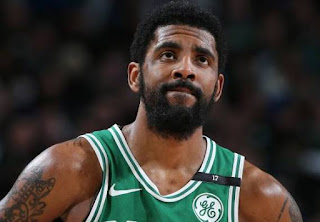 If before the season began, you read a Sportsbetting.ag review at the one place where all the best online sportsbooks can be found, Sportsbook Review, then you would know that the oddsmakers there were dealing the Celtics at 59 wins on the 2018-2019 season. We can all look back at that total with a bit of incredulity followed by a slow eye roll, but how many of you actually bet under that number? Okay, so not everyone’s a bettor but there are plenty of gamblers in and around Boston who never shy away from putting their money where their mouths are, and those who did most likely bet with their hearts and went over that lofty season win total. As we all know, the Green fell well short, with 49 wins, culminating in a fourth seed in the East. Changes need to be made and the focus must now be on combining world-class talent that will play for each other and not strictly themselves.

Terry Rozier, never one to shy away from the spotlight or a microphone, had this to say about playing with Kyrie to ESPN’s Mike Greenberg, "He's a great guy. Great leader. You just have to adjust to his style. Whatever Kyrie wants done, he's gonna show it. That's what he wants done. And you have to adjust to his style of play and how he goes about every game every day."

Well isn’t that special? But I’m having a little trouble wrapping my mind around Terry Rozier adjusting - his words not mine - to anyone’s style. After the Celtics’ stunning run through the postseason last year, where they ultimately bowed in seven to LeBron’s Cavaliers, it was easy to see how that club bonded in a way that was devoid of a spotlight-stealing superstar. Apparently, their success did not sit well with Kyrie, who brooded that the C’s were doing just fine without him. That’s the rumor being reported at multiple outlets and it is said that Kyrie was disgruntled from then on and it carried through to this season.

Understand that Kyrie Irving put up numbers during the regular season that were comparable to season’s past but some of his efforts in this postseason were less than stellar. If we are to lay blame then let’s spread it around and not forget that Gordon Hayward was a max-contract, minimum contributor kind of guy. Jaylen Brown was present at times and at others, he was somewhere else. Jayson Tatum was not the same impact player as he was in his rookie campaign, but his play didn’t dip significantly enough to consider this year a sophomore slump. Al Horford was very good at times but mostly just good enough. This season proved that the Celtics were nothing more than a speed bump to those of championship timber.

The draft is looming, decisions will need to be made, and maybe Danny genuflects at the altar of Kyrie and woos him back into a Celtics’ uniform. Highly doubtful, but the odd thing is that most fans would boo rather than cheer that outcome. Kyrie just isn’t a Celtic and we will never see his name hanging in the rafters because a two-year stint with mixed results does not constitute an honor of that significance. Let’s hope Danny hits pay dirt in the draft and maybe concocts a recipe that will bring Anthony Davis to Boston. Whatever he does, he better do it fast because Titletown demands another championship.