As we await to find out the draft order tonight, it got me thinking how ping pong balls can make or break a GM's tenure. Look at Jerry Colangelo in Philly. When he traded the #3 and a future Lakers or Kings pick for #1 with the intent to draft Markelle Fultz, most at the time didn't bash him. Fultz at the time looked like a can't miss prospect, Had a smooth, effortless flow to his game reminiscent of James Harden. Everyone knows what the happened. Fultz struggled mightily either mentally or physically and Tatum had a fantastic rookie year.


We still don't know 100% what Fultz will become in Orlando, but what we will find out tonight is how much Colangelo gave up to move up from #3 to #1. The Warriors gave up Robert Parish to move up those two spots. If the Kings pick stays at #14 tonight then giving up that pick to move up two spots wasn't a mistake in and of itself (just looking at moving up the two spots. Not at who was drafted). But if the Kings pick moves up to #2, #3, or #4, then Ainge has his own Kevin McHale and Robert Parish trade. Trading down from #1 to #3 to draft your guy Tatum was good. Trading down to draft your guy and end up with let's say Ja Morant. Now that would be amazing. And on the flip side, would make Colangelo's tenure in Philly even worse.

Another GM who would have been looked at a whole lot differently if ping pong balls went another way is the Celtics own M.L. Carr. Talk to Celtics fans and they almost universally say he was horrible. And yes he made some poor moves, but he also was dealt one of the worst situations a GM has had to deal with. the contract of his star player Reggie Lewis who passed tragically was still on the salary cap books for a reason only David Stern could explain. We were limited in who we could sign because the salary of a player who was no longer living was still being counted against our cap.

If ever there was a year to tank it was the 1996-97 season. And if ever there was a team that deserved to shoot for a top pick it was the team that was barren of stars because the two players who should be leading them at that time, lEn Bias and Reggie Lewis, had both passed away in their athletic primes. And to add to that, the Celtics were still being penalized on the cap with Reggie.

To his credit, ML made a shrewd move in June 1996 and traded Eric Montross to the Macs for an additional, unconditional 1997 1st rounder. Not only that, but the trade also included the Celtics moving up in the 1996 draft into the top 6 of what was heralded as a 6 player draft. The Celtics selected future all-star Antoine Walker in that '96 draft.

ML would take one for the organization and tank in that 1996-1997 season. To his credit he didn't force this on another coach; he coached himself. We had the best odds for the #1 pick, not just because of our own pick, but because Dallas continued to suck. Now we get to the ping pong luck. The Celtics own pick, nor Dallas' didn't land at #1. We moved down to #3 and #6. 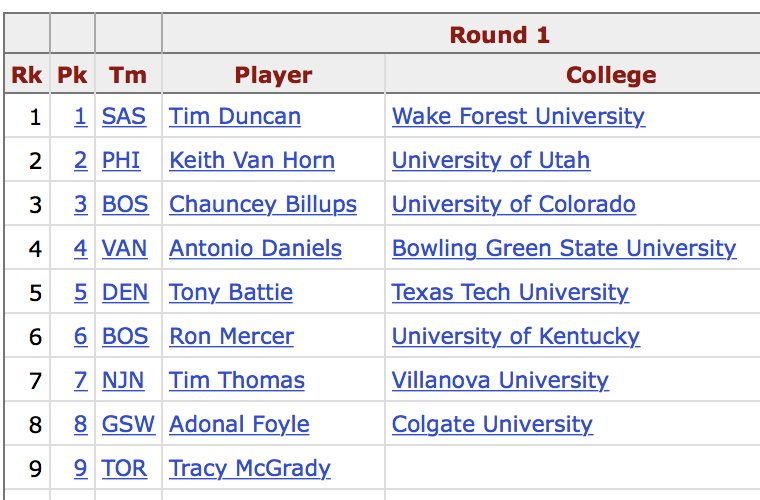 By draft time, Rick Pitino had taken charge and wisely took Chauncey Billups at #3 (then stupidly traded him a half yr later) and with the Dallas pick took the safe choice of his own Kentucky Wildcat in Ron Mercer. Mercer wasn't a bad pick at the time and the net result of Antoine Walker + Ron Mercer for Eric Montross and Samaki Walker was a fantastic trade on ML's part. But who is to say that if Carr was able to draft the two picks he had produced if he would have taken Mercer #6? Carr was reportedly one of the GM's highest on High School guard Kobe Bryant in 1996. After watching a high school guard be successful as a rookie in Bryant, I could see Carr having used that #6 pick in '97 on the next high school phenom Tracy McGrady who would end up being drafted three spots later to the Raptors.

The point of this long rambling article is that at the end of the day, ping pong balls can make or break someone's job. If Carr had built a young Celtics core of Duncan, either T-Mac or Billups, and Antoine, he'd have gone down as a all-time great GM. The ping pong balls didn't go the Celtics way (no team has had better odds at getting the #1 pick since then due to the fact that not only did the Celtics' pick have the most balls, but we also had the Mavs' ping pong balls) and no one walks the streets of Boston talking about how Carr was a good GM or was responsible for one of the greatest trades in NBA history (if the Mavs pick hat hit #1). Pretty sure I'm the only one on the internet who has written that Carr wasn't as bad a GM as people think.