It has been 25 days since Marcus Smart's abdominal injury, and he was at practice today looking exceptionally healthy. We can't get too excited. Marcus was given a 4-6 week timeline for a possible return, and Brad Stevens has made it known that four weeks would be pushing things. But at three-and-a-half weeks, he was going 1-on-1, performing spin moves, dunking the ball and taking minimal contact from a defender. 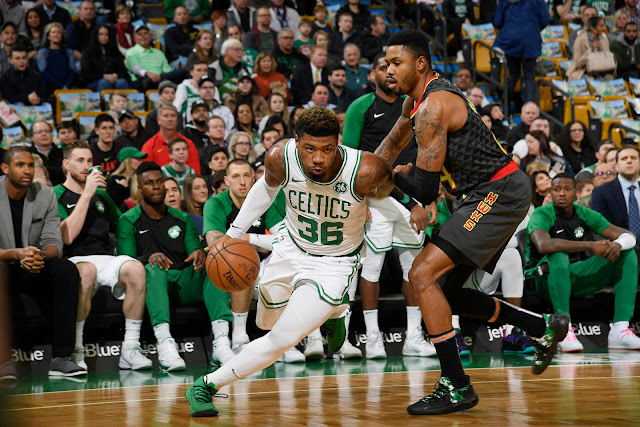 The Celtics: "Smart still has a long way to go, not close to being ready"
Marcus Smart: pic.twitter.com/MH21VGZegz

The Celtics are now 1-1 versus Milwaukee in the series, and Game 3 is tomorrow night in Boston. The Bucks Malcolm Brogdon may return to their lineup on Friday after nursing a foot issue, and that is reason for concern for Boston. It does not appear that Smart's return is that far off, but we shouldn't get too optimistic. Smart's oblique muscle avulsion (off the iliac) is a rare injury - and that is part of the reason why it was not diagnosed right away. I am guessing that the knowledge concerning the chance of re-injury is somewhat cloudy also. Stay tuned for updates.